Tech minister Ed Husic: ‘we need to back ourselves more.. and convince others’ 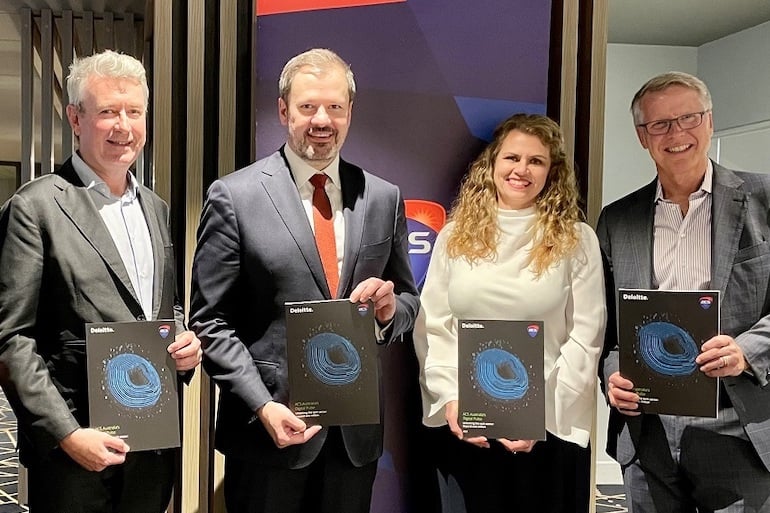 The tech sector should be presenting a united front to highlight the importance of digital technologies to society and the economy, Federal Minister for Science and Technology, Ed Husic, said in Canberra this week.

Speaking at the national launch of the 2022 ACS’ Digital Pulse report at the National Press Club, Minister Husic called on technology sector groups – including ACS, the Tech Council, and the AIIA – to work together in highlighting the benefits of technology and digital transformation to governments and the wider community.

“The big thing,” Minister Husic said, “is reaching out, particularly on policy within government and emphasising the value of the sector not just to government, but to the broader economy and community.

“I think it’s been undervalued for quite some time and is why I don’t think there’s been necessarily the investment or attention given.

ACS Chief Executive, Chris Vein, underscored what the technology sector can offer Australia, describing it as a “perfect storm of opportunity” although not without its challenges, particularly in meeting the sector’s need for skilled workers.

“The challenge is that Australia is not alone. I come from the US, from California – working in Silicon Valley, we have the same problem,” Vein said.

“But what that means then is that Silicon Valley is going after the same talent that you are. And what we have now is this race to the top for talent, a war for talent, if you want to use that analogy, and it is an amazing thing to behold.

By 2027, Digital Pulse predicts Australia will need more than 1.2 million IT professionals to meet demand, up from the current 870,000 working in the sector.

During the event, Minister Husic also flagged how important it was that governments and political parties also work together to maximise the tech sector’s benefits, observing that the ACT Chief Minister, Andrew Barr; Territory Greens leader, Shane Rattenbury; and Opposition Leader, Elizabeth Lee, were at Monday’s ACS report launch.

“It is tremendous and speaks volumes of politics in the ACT to have representatives all of the major parties here,” said Husic.

“I do think, longer term, we need to find a way to be able to work together on common problems. So I want to recognise that and as I was remarking to Andrew Barr, the ACT is underappreciated.”

Over the past two years, the ACT Government has launched its Digital Strategy which applied a whole-of-government policy on how the Territory applies technology, followed by the launch of a Canberra Cyber Security Cluster.

The Territory has also been working with ACS on easing the transition of skilled female workers into the ICT sector.

In concluding, Husic highlighted the importance of the sector to Australia, saying “the reason I talk about tech so much, and why I feel so strongly about it, is it’s a reflection of who we are as a people, that we are smart, that we can problem solve. And that we should be doing as much as we can to celebrate that talent.”

“If you look at some of the things that we’ve put out as policy, you know, for example, in the national reconstruction fund, we dedicated $1 billion towards critical technology. We want to make sure that when bright people have got ideas that they want to breathe life into, but they do it on Australian soil, and that they’ve got the capital here to back them.

“We are smart people and we need to back ourselves more, we need to convince others in the community to do so, and make sure they know that the tech matters, works and can make a difference.”

Paul Wallbank is ACS' Media and Communications Manager. Before joining ACS, Paul was News Editor of media and marketing website, Mumbrella.
Paul has covered technology and business for over 15 years for outlets including the ABC, The Australian, Fairfax metro titles, the Australian Financial Review, Business Spectator along with other local and international publications.