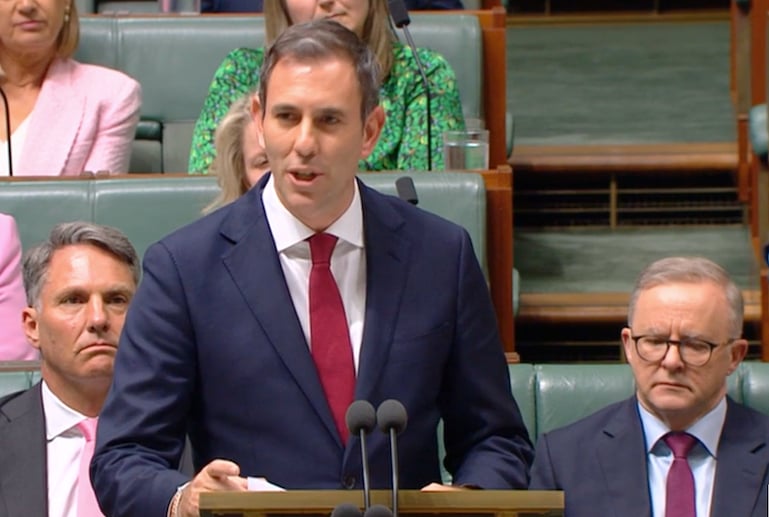 Treasurer Jim Chalmers told reporters on Tuesday his first budget was “the beginning of something new and responsible”.

The October 2022-23 budget under Labor is certainly a different beast from the one handed down by the Coalition just before the federal election. It is not just the numbers that have changed, the approach is different as well.

Fiscal strategy is about the government’s approach to spending and tax. All federal governments need to spell out their fiscal strategy under the Charter of Budget Honesty.

The Coalition government had a long stated goal of keeping tax revenue below 23.9% of GDP. There was no science behind this number. It was just the ratio during the Howard government.

A key difference under the Albanese government is there is now no arbitrary number. But it makes a commitment to direct the “majority” of revenue improvements to budget repair.

Less than half the revenue improvements in the last seven budget updates were directed to improving the budget balance. This year it will be more than 90%.

There is also a commitment to “limiting” growth in spending until gross debt as a share of GDP is on a downward trend. The debt to GDP ratio is projected to increase until at least 2032-33. But this commitment only holds “while growth prospects are sound and unemployment is low”. It therefore does not rule out fiscal stimulus in a crisis.

The strategy refers (repeatedly) to the budget needing to be “sustainable’’.

A focus on wellbeing

The main budget paper now has a new chapter, called “measuring what matters”.

It has long been acknowledged that GDP is not, and was never designed to be, a measure of “wellbeing”.

Yet until now, GDP has largely by default been regarded as the benchmark of national success in the budget papers.

This year, the budget also includes “indicators that measure broader quality of life factors’” and compares Australia to its peers in the OECD.

The budget papers present the indicators as a dashboard with green coding for where Australia outperforms.

Areas where Australia is doing better than the OECD average include income and wealth, employment, education and life expectancy. But in some areas (shown in red), we are doing worse than the OECD and deteriorating, such as the number of threatened species and the extent of household debt.

There is no attempt to weight the indicators to form a single overall index.

But with statements like “Australia is at or better than the OECD average on 21 of the 32 headline indicators,” this represents a market difference from past budgets and a change in the way we view what matters in policymaking.

Climate change is mentioned on some 16 pages of the main budget document. This includes the “measuring what matters” chapter, with the acknowledgment Australia has the highest per capita greenhouse gas emissions in the OECD.

There is also a new section on the “fiscal impacts of climate change”. This notes how climate change adversely affects economic activity, by eroding the tax base. Climate change also leads to higher spending on things like disaster relief.

The section also notes how moving away from fossil fuels will boost tax collections from some industries. For example, the shift to electric cars will stimulate demand for the lithium used in their batteries.

This will not be the last mention. A new annual climate change statement will be made to parliament. The implications of climate change will also be analysed in next year’s Intergenerational Report. To assist in their preparation, Treasury’s climate modelling capacity will be rebuilt.

The 2022-23 budget gives us new and useful information and analysis about our economy and policy landscape. It also promises more to come.

There will be a new wellbeing statement in 2023 and unusually, the budget papers invite readers to submit their views on this issue.)

There will also be a white paper on employment in the second half of 2023. Public servants and economists are going to be very busy.