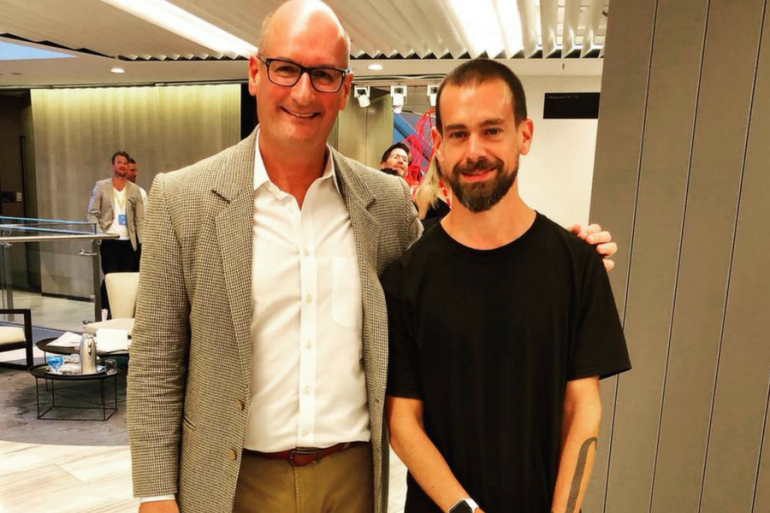 David Koch with Jack Dorsey on a 2018 visit to Australia

Twitter co-founder Jack Dorsey has resigned as chief executive of the microblogging site after 16 years.

The resignation was effective immediately. He was replaced by the company’s chief technology officer Parag Agrawal, who has been with the company for a decade and CTO since 2017.

Dorsey will also leave the board when his term expires in 2022. He remains CEO of payments company Square, which is buying Australian BNPL fintech Afterpay for A$39 million.

His leadership of both companies, amid thought bubbles on Twitter about moving to Africa, has been under question and scrutiny in the last few years.

One investor Elliott Management, pushed to oust Dorsey from his Twitter role last year. It was his second stint as Twitter CEO having briefly held the position in 2006, only to be removed from the role in 2008, before returning to it in 2015.

“I’ve decided to leave Twitter because I believe the company is ready to move on from its founders. My trust in Parag as Twitter’s CEO is deep. His work over the past 10 years has been transformational. I’m deeply grateful for his skill, heart, and soul. It’s his time to lead,” Dorsey said in a company statement.

The boardroom is also seeing change, with chair Patrick Pichette to be replaced by Bret Taylor, president and COO of Salesforce.

After posting “I love Twitter” on the site on Sunday, Dorsey posted his departure on the site with a note citing three reasons to leave. His trust in Agrawal is “bone deep” he said, and Taylor’s appointment as chair gave him confidence.

“All of you have the potential to change this company for the better,” he wrote to Twitter’s staff.

not sure anyone has heard but,

Dorsey, 45, became a billionaire thanks to Twitter, with a net worth of US$12 billion, although the vast bulk of that fortune came from his stake in Square.

News of his departure pushed Twitter shares up more than 10% before it turned around to slump more than 1% in Monday trade.