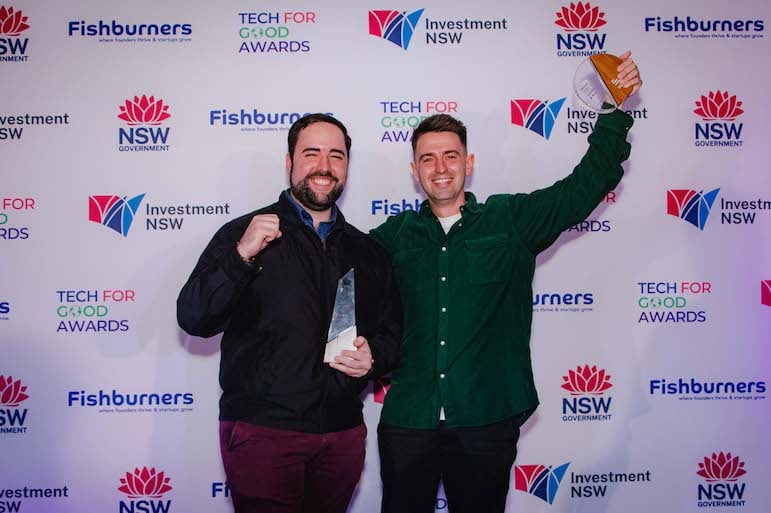 Medtech startup Nuroflux, which has developed a device to monitor brain activity and blood flow following a stroke, was chosen as the best of seven category winners the inaugural Fishburners Tech for Good Awards.

More than 250 startups entered the awards spanning seven categories, with the winners giving a 90 second pitch to decide the overall excellence award won by Nuroflux, alongside a People’s Choice award, won by Homeable and chosen by the more than 200 guests at the awards.

Nuroflux cofounder and CEO Sam van Bohemen was inspired by personal experience to found his startup with Dr David Cardoso, He thanked Fishburners, the sponsors and the judges for making it possible.

“It was very inspiring to learn about the amazing startups seeking to make the world a better place, we wish them the best.”

The winners of the Tech for Good Awards are:

The Diversity and Inclusion Award, sponsored by Optus: Homeable

The awards emerged out of the launch of the Tech for Good Hub at Fishburners, which saw  30 sustainability startup founders current taking part in a 9-month scholarship program.

Fishburners interim CEO Alan Jones said Tech for Good is based on the idea that the best way for companies to future-proof themselves is by working to solve – not contribute to – global problems affecting people and the planet.

“Startups don’t exist in a bubble. The businesses we hope to build to fulfil our entrepreneurial ambitions depend upon the viability of the society, economy, and natural ecosystem we exist within,” he said.

“The big, intractable problems outlined in the SDGs are also the most valuable opportunities for startups to address. We’re delighted to raise awareness and support the growth of a group of awesome Aussie startups making real progress against SDG goals in our inaugural Tech For Good Awards.

“We’d like to thank our amazing sponsors Investment NSW, Amazon, Optus, BDO, Microsoft and the AusIndustry Entrepreneur Programme for supporting this initiative in its very first year.”

Adam McCurdie, founder & CEO at Humanitix, Social Impact Award winner, said there are a wealth of urgent social issues that the for-profit sector is not dedicating enough resources to solving.

“Humanitix is already making incredible inroads at transforming the US$3.7 billion global ticketing industry, but this is just the beginning for us,” he said.

“There are hundreds of for-profit industries that can be disrupted using scalable tech to provide a valuable offering while also reinvesting profits to social causes. We invite entrepreneurs everywhere to join us in following a for-purpose path, to create a world where all businesses, structures, and systems work to serve the best interests of our planet and everyone (and everything!) sharing it.

“But it takes a village to raise a startup. So we are grateful for the support we’ve received from Fishburners – from using the Humanitix platform for all Fishburner events, to providing opportunities to inspire, engage, and educate audiences about our unique philanthropic model at Pitch Nights and other events.”

“This enables them to coordinate targeted evacuations and swiftwater rescues, and route traffic around flooded roads,” she said.

“If all emergency managers and communities had access to FloodMapp, we could save thousands of lives, prevent billions of dollars in damage, and fast-track recovery overall from flood events.”

The Tech for Good Awards are supported by Investment NSW as a primary sponsor, with individual award sponsors including Amazon, Optus, BDO, and Microsoft. Each category winner received a $5,000 cash prize. 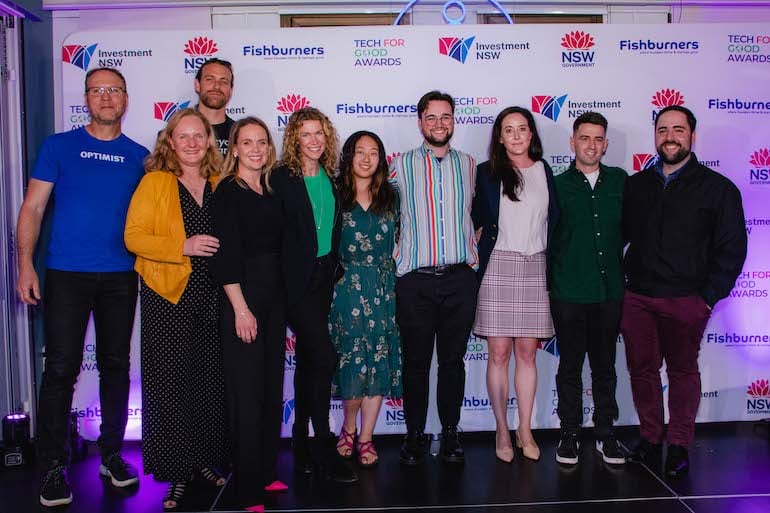