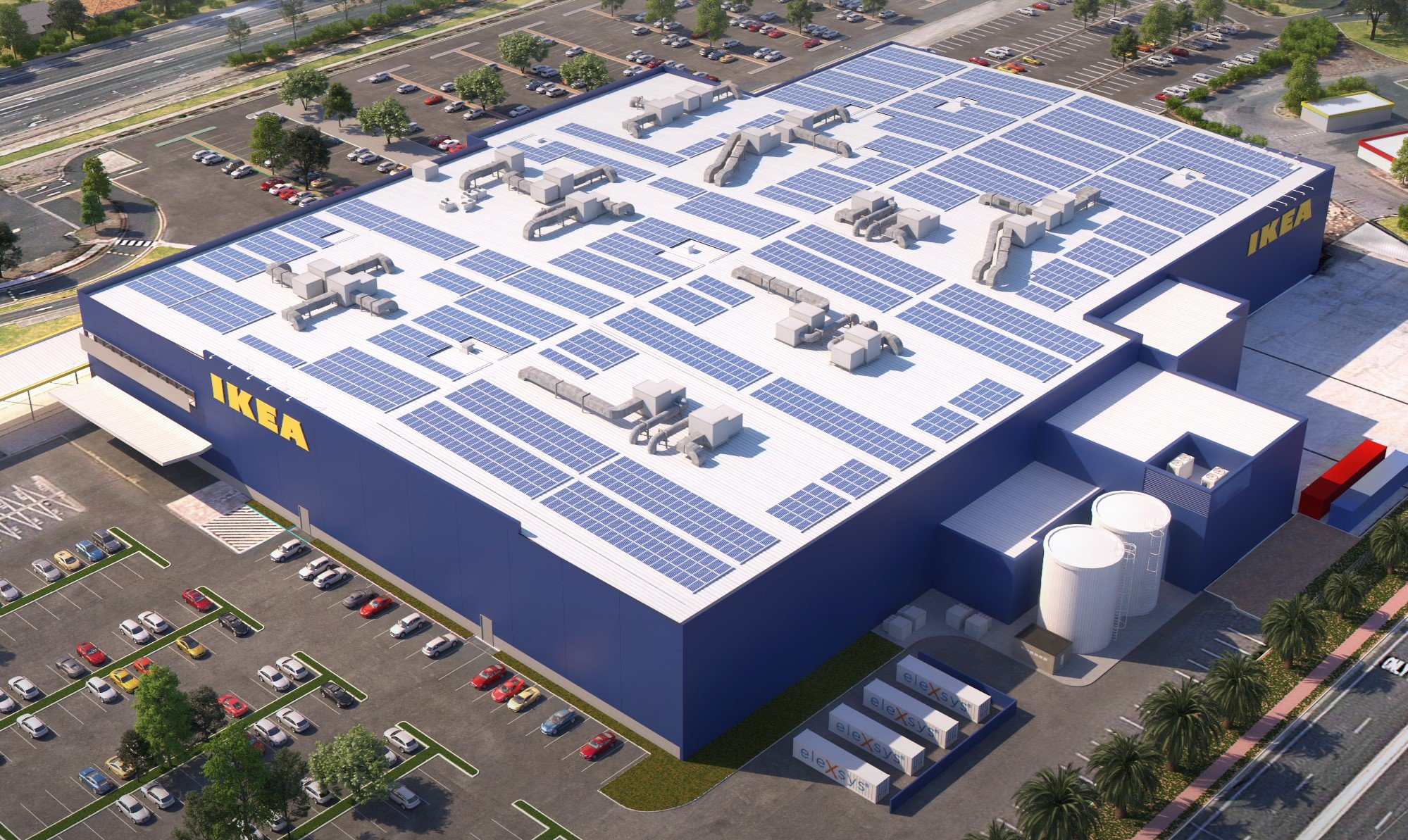 An artist's impression of the IKEA store in Adelaide covered in solar panels to make it run completely on renewable energy.

IKEA Australia will install solar panels generating 1.2MW of electricity on the rooftop of its Adelaide store as it moves towards operating with 100% renewable energy by 2025.

The project will create largest grid-connected commercial microgrid, connecting with the South Australian power network, and will be coupled with a 3.4MWh onsite battery – think around 180 home Telsa batteries.

The IKEA Australia Clean Energy Transformation Project is being run in conjunction with Planet Ark Power, the South Australian Government, which is contributing $1.95 million in funding through its Renewable Technology Fund, SA Power Networks and Epic Energy, which will own and operate the microgrid.

Stage 1 of the project, involving the rooftop solar panels will supply up to 70% of the store’s power consumption, with Planet Ark Power’s eleXsys technology solution trading surplus stored  energy into the South Australian network when demand is at its highest.

The second stage entails the construction of sustainably sourced timber PV shade structures across the IKEA Adelaide car park, covered in additional solar panels to generate a remaining 30% the store’s energy needs to make it run completely on renewable power.

As part of the project, EV chargers will be installed on site for customers, co-workers and the IKEA delivery fleet servicing South Australia.

IKEA and its partners in the project will also be looking at the viability of hydrogen energy being generated on site.

Based on its success, IKEA is considering transforming itself into an energy provider that can generate and sell renewable energy to the electricity network.

“Our ambition is to be the first mover and inspire other IKEA stores to install larger solar  installations, batteries and digital solutions,” he said.

“Planet Ark Power’s eleXsys energy management system will support the balancing of the electricity grid not just on stores in Australia, but across the IKEA  network around the world.”

“Epic Energy believes this project – and decentralised generation more broadly – sets the foundation  for a sustainable new energy model for Australia, that will play an important role in Australia’s  energy mix over the coming years,” he said.

“Our involvement demonstrates the attractiveness of investing in projects that can safely, securely and reliably export surplus clean energy into low voltage urban networks.”

Previous article 5 things you need to do to recruit and retain talent
Next article Google’s self-driving car project, Waymo, has launched its autonomous taxi in the US
Via Other tech
Tags ikeanewsrenewable energysolar power