If you’re thinking about buying an e-bike or e-scooter, here are 5 things you need to know 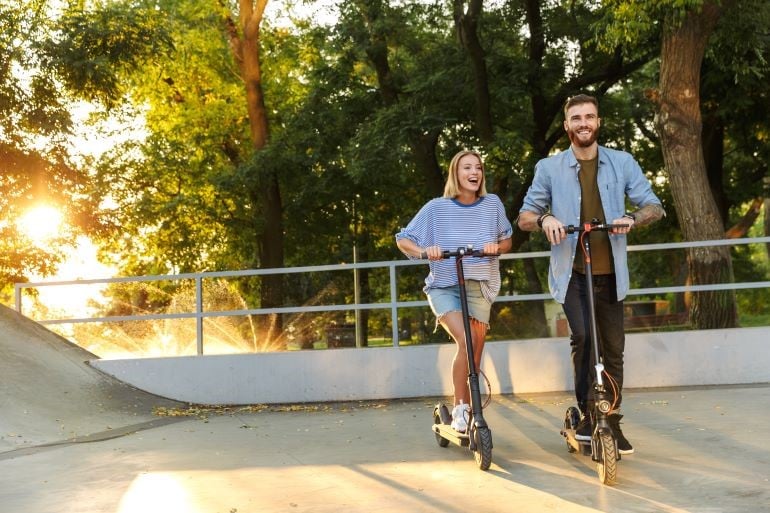 So there’s never been a better time to embrace alternative modes of transport such as e-bikes and e-scooters (also called “micromobility” devices).

In Australia’s major cities, the average car trip is around 10km (a distance many people would consider to be within cycling range).

As both researchers and users of micromobility vehicles, we’re here to help answer some common questions that arise when people consider becoming an e-bike or e-scooter rider.

1. What are the benefits of e-scooters and e-bikes?

E-bikes have been around for some time. Most are “pedal-assisted”, which means the electric motor kicks in when the rider starts pedalling. They’re a good option for longer trips (5-15km), covering hilly terrain, or riding in warm weather.

They can also carry loads on attached baskets or pannier bags. Some cargo e-bikes can be used for shopping runs, or even for operating small mobile businesses.

More recently, e-scooters have grown in popularity. They’re usually ridden standing (although seats can be added as an accessory).

E-scooters are easier to park and take up less space. They can also replace those short car trips that are just too far to walk. As of recently, passengers have been allowed to take e-scooters and bikes on South East Queensland trains, allowing for first- and last-mile connections.

If you’re unsure whether either vehicle is right for you, most major cities offer hire schemes (such as Beam, Lime or Neuron) that let you try before you buy.

These are generally dockless sharing schemes that allow users to park anywhere near their destination, as long as they park responsibly on a footpath and avoid cluttering.

Our past research has shown students are receptive to having shared e-bikes offered at university campuses, and that tourists find shared e-scooters handy when visiting new places.

2. What are the rules in my state or territory?

In Australia, e-bikes that comply to certain European standards (regarding what actually constitutes an electric bike) are allowed on public roads and governed in a similar way to bicycles.

However, the legality of riding e-scooters (or similar devices) in public differs by state and territory.

As per current regulations, the more “scooter-friendly” states are Queensland, the Australian Capital Territory, Western Australia and Tasmania. These states have both share schemes and also allow privately owned e-scooters to be ridden in public.

Victoria, South Australia and the Northern Territory only allow shared e-scooters at selected trial sites, but in general don’t allow privately owned e-scooters to be ridden in public.

Public areas in New South Wales remain a no-go for e-scooters (although trials have been announced to start this year).

Users should check their own state or territory’s road rules and regulations before using or purchasing an e-bike or e-scooter.

3. How much fuel and money can I save?

The cost of buying a micromobility vehicle will vary greatly depending on the vehicle type, battery and add-ons (such as a rack, lights or remote tracking).

We recently surveyed privately owned e-scooter users in South East Queensland, and found most popular models are priced between A$500 and A$1,500. Higher-end models can cost more than A$2,000 (which is still much less than a car, and especially an electric car).

The operating costs for micromobility vehicles are mostly for electricity and maintenance. The good news is these costs are also low, as the vehicles are much lighter than cars and use efficient electric motors. It’s estimated that with one kilowatt hour of energy an e-scooter can travel 100 times the distance a petrol car can, and 17 times the distance of an electric car.

In Australia, the average passenger vehicle travels 11,100km per year and requires 1,232 litres of fuel. At current prices, this equates to more than A$2,700 spent on just fuel, let alone other costs such as lease or loan payments, insurance, registration and repairs.

And if the upfront costs of purchasing an e-bike or e-scooter seem too high, some companies are starting to offer these vehicles for rent by means of a monthly subscription fee.

Safety is a key concern for all road users. As micromobility remains a novelty, the safety record for these vehicles is just being established. That said, a 2020 International Transport Forum report suggests the risk of e-scooters is comparable to cycling.

While there’s little data on e-scooter safety, cycling statistics suggest there is a “safety in numbers” effect. This means there are less fatalities in countries where cycling is more common.

Current e-bike standards are more mature compared to e-scooters. E-scooters available on the private market are not as well regulated, and may exceed local speed or power restrictions (which are usually 25km/h).

Pedestrian and disability interest groups have expressed concerns dockless shared e-devices can create trip hazards or block footpaths. Such concerns are valid, and addressing them will require careful management by scheme operators and local authorities.

5. Will Australia make it easier to ride them?

Australia is well placed to take advantage of the burgeoning micromobility market and reduce the impacts of higher petrol costs.

We believe there is too much attention placed on creating incentives for the electrification of full-sized electric vehicles. For instance, the Queensland government’s recently announced electric vehicle subsidy doesn’t include e-bikes or e-scooters.

Research shows three in four people are interested in cycling, yet the lack of safe routes raises concern for bicycle, e-bike and e-scooter users. Appropriate cycling infrastructure, including protected bike lanes and off-road paths, are essential to encourage the uptake of both cycling and personal mobility devices.

This article was coauthored by Timo Eccarius, Assistant Professor of Sustainability Science and Engineering at Tunghai University, Taiwan.