The rise of ABBAtars: How Star Wars technology is bringing Swedish pop stars back to life in their 70s 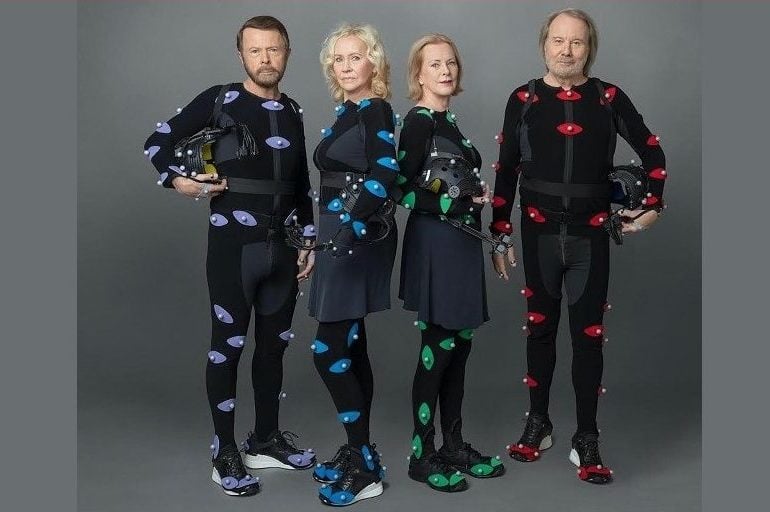 Swedish pop group ABBA is returning to the stage in a virtual concert with the help of image technology used in a Star Wars movie.

ABBA’s popularity has endured over the 40 years since their last album, racking up a staggering 17 number one hits, over 16 million weekly global streams and selling almost 400 million albums worldwide.

Now the famed group has a new studio album Voyage – but it’s the upcoming digital concert that has captured the world’s attention.

The foursome will perform as avatars, or what’s being called ‘ABBAtars’, with a live 10-piece band in a purpose-built arena in London for a series of concerts in May next year.

In Australia, where streaming data reveals Sydney has the fourth-highest volume of streams for ABBA and exceeds global benchmarks, the news was celebrated with striking images of the band’s avatars illuminating the pylons of the Sydney Harbour Bridge accompanied by a dazzling light display across the Bridge arch.

In a sign of their enduring popularity, ABBA Gold, originally released in 1992, recently passed its 1000th week on the UK Album Chart, the first album in history to reach this milestone.

On TikTok, content using the #ABBA hashtag recently reached one billion views – without the catalogue officially being available on the platform. ABBA launches its new album Voyage by lighting up the Sydney Harbour Bridge. Photo: Will Hartl

The original members, Agnetha, Björn, Benny, and Anni-Frid, will perform as digital versions of themselves, not holograms, which have been created after months of motion-capture and digital development.

To create their performance avatars, the band collaborated with an 850-member team from Industrial Light & Magic (ILM), the company founded by George Lucas, in its first foray into live music production.

Initially announced in 2016, it’s take some time to develop the ABBA concert experience, which has included the process of digitising and reverse ageing the band members’ faces, then creating their digital equivalents as performers.

The performance capture has formed the basis for the entire project.

To build their ABBAtars, the band members were clothed in special suits and then filmed by a motion capture team using 160 cameras.

ILM used archive footage of the band that is scanned and then merged with the recent video to develop a realistic-looking performance.

From The Phantom Menace to ABBA

Since 1975, ILM has been innovating in visual effects, specialising in merging photo-like digital images with live-action footage.

The studio has created some of the most engaging images in film, from wholly computer-generated characters in The Abyss, Terminator 2: Judgment Day and Jurassic Park to digital effects in Twister, Star Wars: Episode I The Phantom Menace and The Perfect Storm.

The ABBA bandmates performed every single song in the upcoming show for the motion capture over five weeks so ILM could capture every move and every mannerism in a digital recording to capture the soul of their beings that becomes the essence of the show.

The creators say that this is not a copy or a version of ABBA – it actually is them.

Speaking to The Guardian, ILM creative director Ben Morris said they have recreated the band in its prime in 1979.

“We are creating them as digital characters, then use performance capture techniques to animate them and make them look perfectly real,” Morris said.

Four of ILM’s global studios have worked on the digitally-captured, computer-enhanced concert.

However, the technically-sophisticated setup of the screens, sound production and lights means that at this stage it’s unlikely the concert will be staged in another venue.

To make digital ABBA come into the physical world, it has meant pushing the boundaries between the two to the point where they disappear.

ILM says it’s the light and the audio that is the connector that merges the two realms into a unique space that is neither physical not digital.

After winning the Eurovision song contest in 1974 with its breakthrough hit ‘Waterloo’, the band has had an incredible run creating some of the most iconic songs in popular music, sold out concerts, legions of devoted fans, the spin-off Mamma Mia! musicals and movies – and now breaking new ground with high-tech concerts.

Rosalyn Page is an award-winning freelance journalist writing about technology, innovation and digital lifestyle for Australian, UK and US publications.