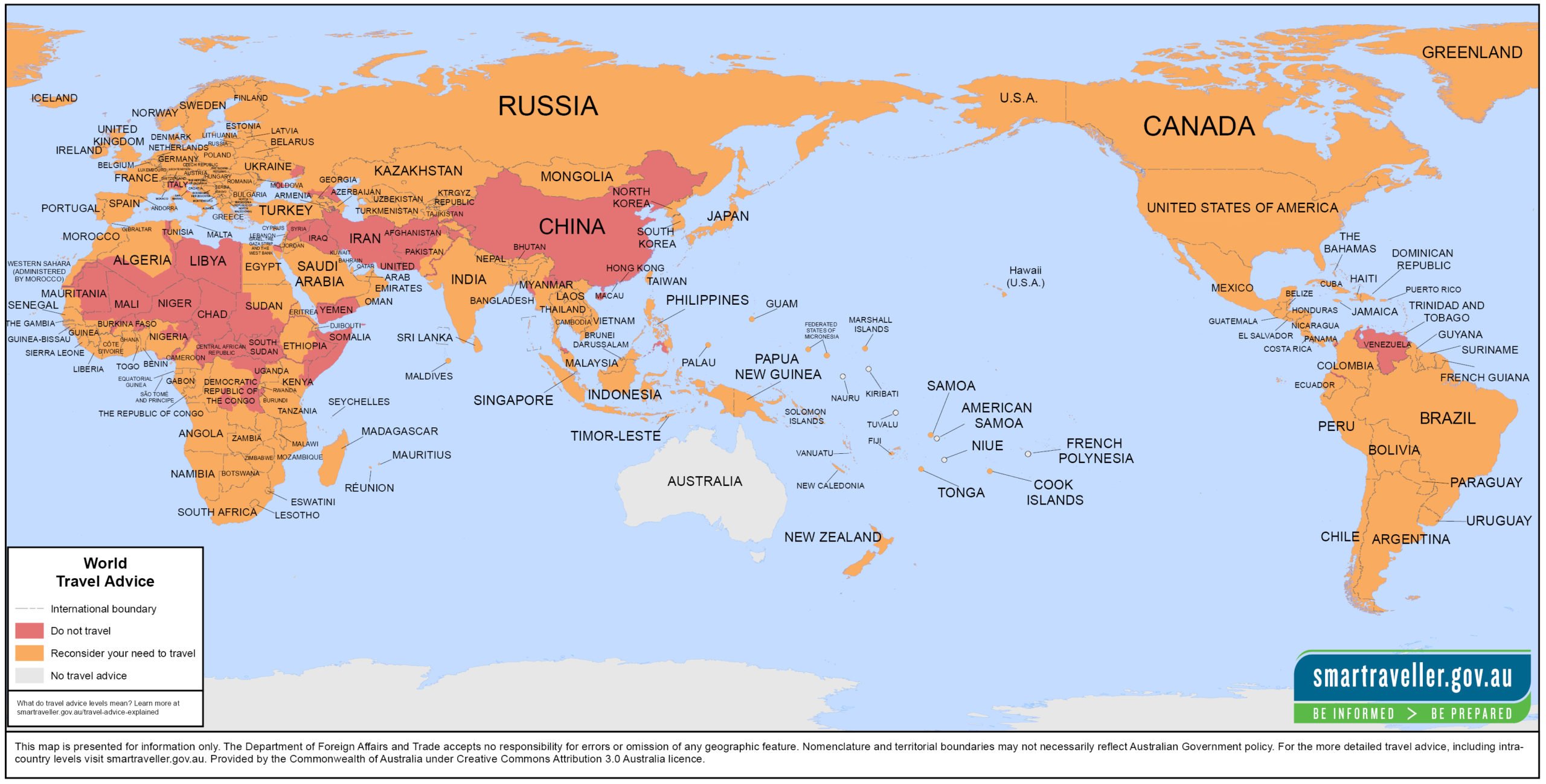 We’re publishing this daily update to keep the startup/tech community informed about the global coronavirus pandemic.

Take a look at the image above. The red is where the government says you shouldn’t head.

We’ve split our daily update into six sections: Response, Business, Global, Cancellations, Advice and, And also, to help you find what you’re looking for. The latest news in each section at the top.

Let’s begin with the key points

Right, let’s Wednesday. Check back for updates throughout the day as things unfold.

The government announced a ban on indoor gatherings of 100 people or more. PM Scott Morrison said the directive is effective immediately and investigations into further restrictions are ongoing. America already has a no-more-than 10 policy.

The Dept of Foreign Affairs is recommending Australians abroad thinking about heading home before it’s too late.

Australian doctors want a lockdown. The ABC reports that the country is in a worse position than Italy, and that by April 4, there could be 10,000 infections a day. They urge the government to follow the example Asian nations such as China, Singapore, South Korea and Taiwan with strict social distancing and lockdowns to halt the spread of the virus. More than 3500 doctors have signed the letter.

And from the supermarkets. Be kind.

Westpac predicts 7% unemployment.  The bank’s Macro team, led by economist Bill Evans, increased its estimates on the shock to consumer spending to hotels, restaurants and cafes,recreational services, and air travel to minus 40% over the two quarters from minus 25%; the expected shock to consumer durables to minus 7% and revised up the negative impact on home renovations and additions.

Evans expects outbound and inbound tourism to contract by 80% over the two quarters. Tourism is worth around $61 billion to GDP (3.1%) and employs around 646,000 (5.2%)  of Australians. 26% of that figure is international tourism.

Evans says they now see consumer spending contracting by 0.1% (March quarter) and 2.8% (June quarter) before recovering by 1.9% in the September quarter and 1.0% in the December quarter.

“The unemployment rate is now forecast to reach 7% by October 2020 (up from the previous estimate of 5.8%-6.0%) due to the larger negative shocks to the labour intensive sectors such as recreation; tourism; education; renovations and additions; and dwelling construction. ” 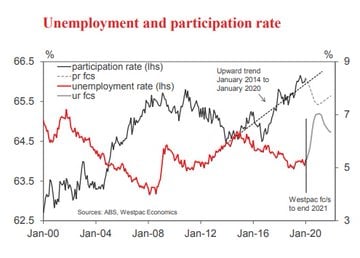 Early trading in airline shares were mixed. Qantas fell more than 7%, while Virgin Australia recovered to be up more than 12%, but Rex fell 6% as trading in its stock resumed.

Flag carrier Qantas plunged 7.34% while challenger airline Virgin Australia, which had been the focus of market speculation about its financial viability, soared 12.7%. Regional airline Rex, which this morning revealed its own financial weakness, dived 6%.

Virgin Australia will ground international services from from March 30 to June 14. The grounding involves around 53 craft. Domestic flights will be cut by 50% until June 14.

The government will forgo fuel excise, and other service and security fees as part of a $715 million package for local airlines. Rex, the country’s 3rd largest airline, suspended trade in its shares yesterday and they are expected to return to trading today.

KFC has banned in-store dining. Drive through will continue to operate.

Henry Blodget founded Business Insider. Joe Weisenthal is one of America’s savviest business writers. Show this tweet to anyone in Canberra working on the next round of stimulus.

There is no other way to help people and companies fairly other than giving every American cash. By the time the government analyzed who is really "affected" and who isn't, everyone would be bankrupt. https://t.co/oYwAJzUvD0

New Zealand has eight new coronavirus cases, for a total of 20.

Four in Auckland, two in Waikato, one in Christchurch and one in Invercargill. All the patients had travelled overseas.

France is nationalising its health system.

International Anzac Day services have been called off.

Newington College in Sydney is closed for 24 hours, with all students at home. A teacher at the inner west private school has been in close contact with someone with the virus, so the closure is a precautionary measure.

The PGA Championship is postponed. It was due be happen in mid-May in San Francisco. The first major at Augusta is already postponed.

Kochie’s Your Money & Your Life has some excellent advice on handling your personal finances during this crisis. Read it here.

Meanwhile, as the PM said, head here for health advice.

You will only be tested for #COVID19 if you develop a respiratory illness and:
– returned from overseas, or have been in close contact with a confirmed case, in the past 14 days
– are a healthcare worker, with a fever, who works directly with patients.https://t.co/JD5gXxL1X5 pic.twitter.com/GW5nin9nzE

This guy has a lot at stake.

A message from me and my dad, @Melbrooks. #coronavirus #DontBeASpreader pic.twitter.com/Hqhc4fFXbe