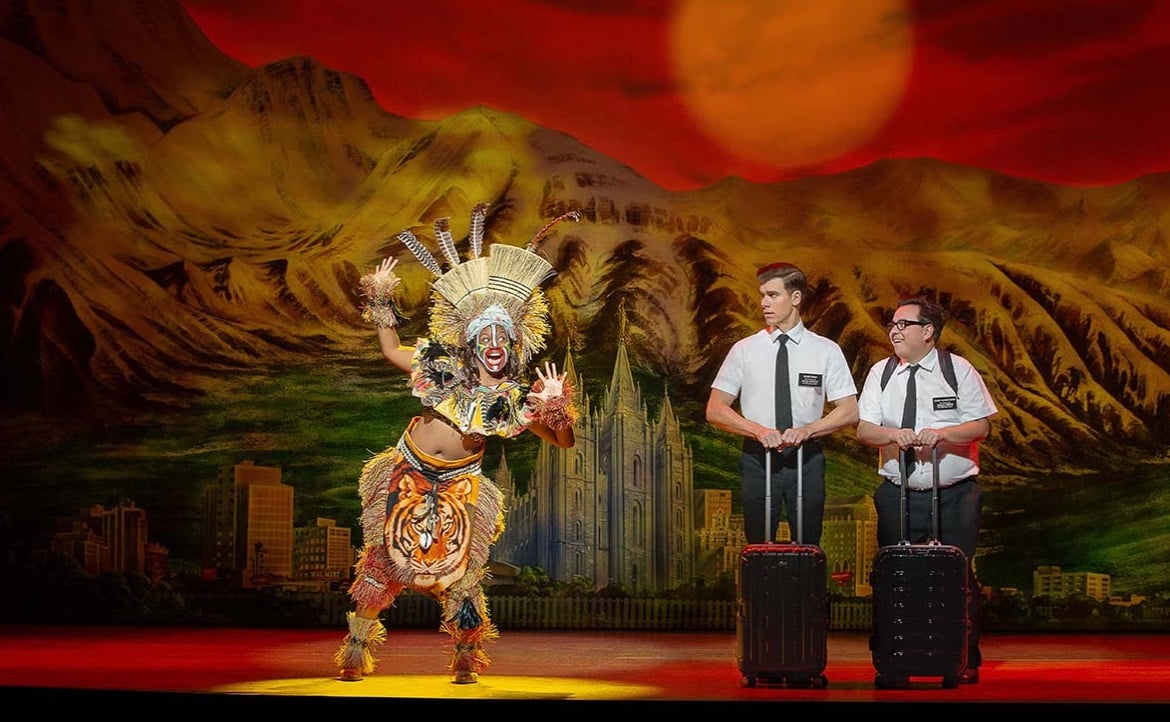 A scene from The Book of Mormon, which has toured Australia and is currently on hold in Auckland under lockdown laws. Photo: Jeff Busby

New South Wales residents will be allowed to have up to two adult visitors in their homes from Friday, as the state relaxes its lockdown restrictions, Premier Glady Berejiklian announced on Tuesday morning.

The change means friends can catch up at home and bring their children if they want to.

While there are risks, Berejiklian said she was “confident that people will be responsible”.

The change comes as just 36 hours after the federal government released the CovidSafe tracking app, which has been downloaded more than two million times – 20% towards the goal of 10 million users, 40% of the population.

The Premier said that if people have even the “mildest sniffle” or feel unwell or fatigued, they shouldn’t visit anyone.

“Don’t take risks. We don’t want to see the numbers suddenly spike up because people are being irresponsible,” she said.

“We know that for many people, they’ve been cooped up in their homes for a number of weeks, and with the exception of exercising, medical needs or buying what they need to or going to work, many people have been isolated in their homes.”

She said that if you’re visiting someone over 70, or someone with a co-morbidity, “you have to practice really good social distancing”.

NSW recorded five new infections in the last 24 hours in a continued decrease in cases to 3,009 cases in total.

Queensland has reported no new cases, but Premier Annastacia Palaszczuk continues to resist pressure from the federal government to completely re-open the state’s school, which are only open for the children of essential workers. The state government will revisit the issue in a just over fortnight, on May 15.

In Victoria, Premier Daniel Andrews said they’d been two new cases in the last day, with 11 people in intensive care, and the state’s tough social distancing restrictions remain in place until at least May 11.  Victoria Police fined 56 people in the last 24 hours for breaking the laws.

The Premier also announced a nine-week closure of the Frankston train line to remove level crossings and upgrade stations.

There have now been 6,727 cases of coronavirus in Australia.

Bondi Beach reopened on Tuesday morning for the first time in five weeks to allow people swim and surf.

Waverley Council has also opening Bronte beach, as well as Tamarama for surfing only. All three beaches are open 7am to 5pm weekdays, but closed for other uses such as sunbathing, with the local mayor saying it was for locals only and just for “swim and go” and “surf and go”, with designated entry and exit points and social distancing rules still in place.

The area has been a Covid-19 hotspot with more than 180 cases.

After opening, then closing beaches further south, Randwick City Council has again reopened its beaches to exercise only today, with the ocean pools remaining closed. There are no time restrictions. Most beachside car parks remain closed. On the other side of Sydney Harbour, Northern Beaches Council, is keeping beaches such as Manly and Freshwater closed.

Meanwhile in Canberra Treasury secretary Dr Steven Kennedy told a senate committee looking into the coronavirus this morning that the country had never seen an economic shock of this speed and size.

Treasury expects the unemployment rate rise to around 10% in the June quarter.

“Unemployment rose to higher levels in the Great Depression, but it did that over the course of a couple of years. These movements are happening in just a couple of months,” Dr Kennedy said.

“We have never seen an economic shock of this speed, magnitude and shape and reflecting this is a significant and demand shock. The supply of goods and services has been badly disrupted by the necessary social distance measures. Demand is being reduced by the associated loss in income and profits and loss of confidence.”

The Treasury boss said the federal and state governments had substantially lessened the economic impact of the lockdowns by acting decisively and early.

Across the Tasman, life in New Zealand began a return to normal on Tuesday after the nation moved from level four to three restrictions, allowing more than 400,000 people to return to work in “non-essential” businesses, as well as the health, hospitality and education sectors.

The country has posted single figure infection growth rates for the past week, leading Prime Minister Jacinda Ardern to declare victory in stopping the spread of the virus.

“There is no widespread undetected community transmission in New Zealand, we have won that battle. But we must remain vigilant if we want to keep it that way,” she said.

The ABC reports that drive-through fast-food restaurants, which had been banned, were among the popular activities on the first day of level three Kiwi life.