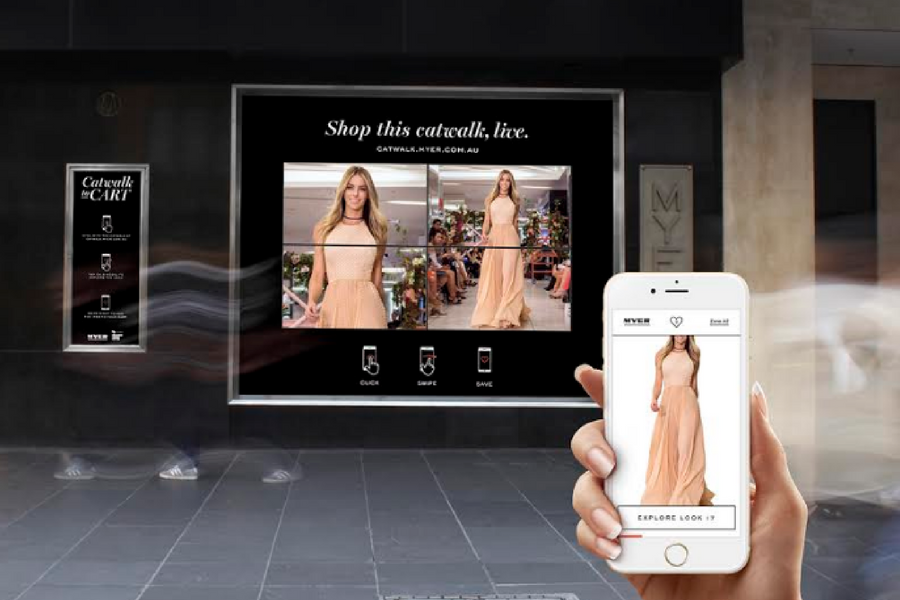 Retailer Myer has announced the release of ‘Catwalk to Cart’, a new online platform offering a Tinder-like approach for guests attending the Myer parades at the Virgin Australia Fashion Festival (VAMFF) in Melbourne to allow them to buy clothes they see on-demand.

Guests watching the parades are able to ‘scan’ a model in the parade using their phone camera and view the presented outfits on the mobile platform.

Users are then able to either add the outfit to their cart, or search through other items using Tinder’s swipe-left, swipe-right formula, where items of interests are saved for purchase.

At the end of the show, guests are able to review the items they’ve saved in their wish list and transfer them to their shopping cart.

“There’s been a problem with all fashion brands around how they justify the investment they make in runway shows. They’re not cheap to put on. They’re important for positioning…but it’s really hard to prove a direct sales outcome,” said Lamplough.

The announcement comes after other Australian fashion ecommerce platform The Iconic looked to commercialise the runway last year, having launched ‘Shop the Show’ option during last year’s VAMFF show in March.

International brands have also seen movement towards on-demand runway, with Topshop offering a services for attendees and online viewers for their London fashion show to examine and buy items modelled on the runway.

“Shoppable videos and live-streaming are now commonplace, but the user experience is often clunky, integrating multiple products within a fast-moving video is hard and handing off to e-commerce carts has been problematic,” he said.

The organisations believe that developing a mobile platform rather than an app was key to enabling Catwalk to Cart to be easily accessible to any user, rather than having to download and retain an app on a phone.

Users without a ticket to the show will also be able to interact with the parade through an online live stream which will also be available in Melbourne’s Burke Street store window, in addition to a number of digital billboards scattered throughout the nearby area.

Leveraging live streaming was an area Myer looked to earlier this year, as the company partnered with Twitter’s to stream Myer’s entire Autumn Winter Fashion Launch event in 360 video.

Users were able to watch the stream using either Twitter or mobile app Periscope, and manipulate the 360 space by scrolling around the screen.