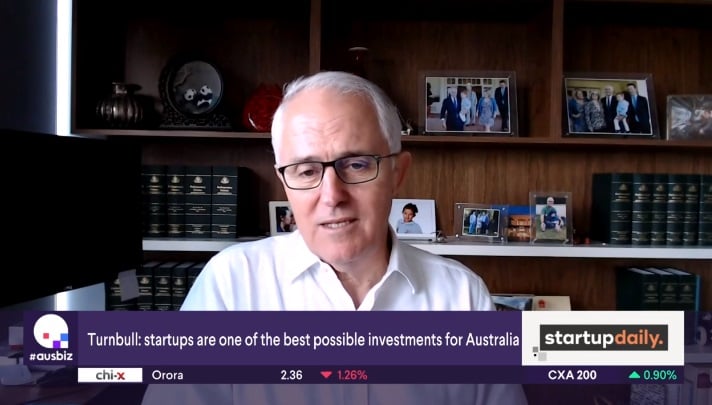 Former Prime Minister Malcolm Turnbull says Australia’s startup sector has an “exponential benefit” and “spillover effect” for the economy that other industries can’t match, and governments need to do more to support startups.

Speaking to the Startup Daily show on ausbiz, the tech entrepreneur turned politician and now tech investor and Kasada board member said industry concern over the Morrison government’s recently released cybersecurity strategy for lacking a focus on innovation and investment was “fair criticism”.

“If we want to have a really cybersafe nation, the government is never going to be able to do it all – nor should it – and so you’ve got to be ensuring that the private sector is not only highly aware of the risks, but they’re also aware of the opportunities,” he said.

His comments come on the same day a survey of more than 400 Australian startup founders revealed that 53% felt ignored by governments and policymakers.

With the fifth anniversary of Turnbull’s ascension to the Liberal leadership and prime ministership next month, he said that the tech ecosystem is “vastly” bigger today than when he first put innovation on the national agenda at the time.

That includes the “billions of dollars available in the sector” from investors, a far cry from when he put $500,000 into a nascent tech business, Ozemail, only to exit five years later with an 80x return.

“You couldn’t raise any money for technology in those days,” he said, referring to Ozemail.

Discussing the private investments he’s made in startups alongside his wife Lucy – the roll call includes Myriota, Advanced Navigation, Safety Culture and the recent $1 million into Kasada, where he now sits on the board – Turnbull said they don’t tend to invest at seed level “very often” and “more often at A and B level”.

“We see many more good deals than we could possibly do,” he said.

“We are investing in businesses were we can add something over and above the dollars, so we’re not trying to make portfolio investments. We’re more interested in investing in things where we can play a proactive role.”

Turnbull said it was important for governments and leaders to talk positively about innovation and technology and “not be scared by it”, adding that the view in politics is that outside the major capitals, voters see the sector as “some kid in a t-shirt with an iPad who’s going to steal my job”.

“The reality is that startups are one of the best possible investments for Australia,” he said.

The former PM warned that there was “a sense in the innovation community that the government does have the same commitment to innovation and technology” as it did during his term as leader.

“If that perception is borne out, that will be a disappointment because fundamentally, innovation is the key to productivity, productivity is the key to growth and if we don’t move fast enough in all these areas, others will move ahead of us,” he said.

“So we have to be as aggressive, as entrepreneurial, as enterprising, as agile… as we possibly can.”

You can watch our interview with Malcolm Turnbull below