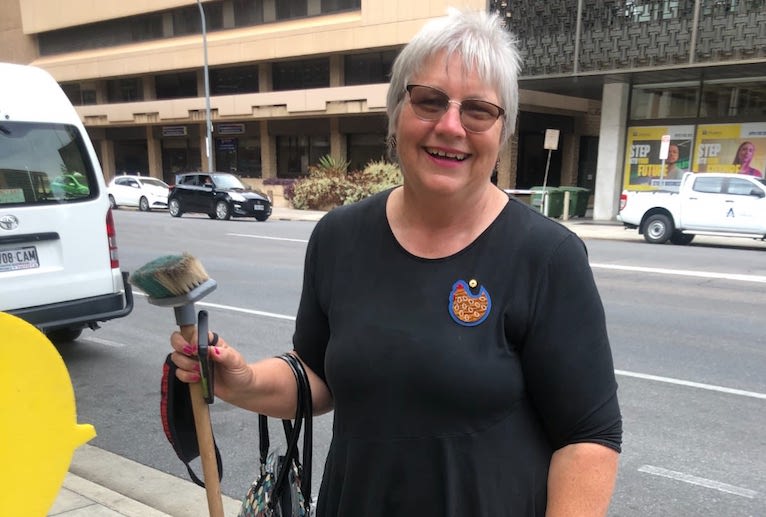 Moira Were AM, a national treasure and South Australian icon

Startup founders often talk about emerging from stealth mode, but it’s rare to see it used on someone within the ecosytem.

But that’s what happened last week at the Impact Summit at _SOUTHSTART in Adelaide, when a group of supporters of local legend Moira Were announced they’d being raising funds to continue her work supporting the local ecosystem.

Moira, founder of ChooksSA, a Facebook community of more then 3000, The Hen House, a coop setting out to close the gender investment gap, as well as Collab for Good, which hosting conversations and action to support change across the nation, also serves South Australia Entrepreneurship Advisory Board. She’s regarded as the beating heart of the Social Impact Investment Network South Australia as well as SouthStart.

As friend, supporter and Hen House board member Kate Simpson, who drove the fundraising campaign points out, around 95% of the work Moira does to help others is voluntary.

“Moira brings a gender and impact lens to everything she does and she is setting out to address the gaps in the eco system as she goes. Some examples of her everyday attention include tackling the gender investment gap, the lack of impact investment and accessible credit,” Simpson said.

“Then there is the invisible work she does all the time, the ten or more people she coaches, supports, connects, champions, lifts up, nurtures every week to supercharge change in the equity ecosystem. We know through Moira hundreds of people benefit each year.”

Moira herself acknowledges that the pandemic flicked a switch her to find new ways to drive change faster.

“This past 12 months I have taken a personal stand to do less paid work and concentrate on contributing into the spaces that I know I can leverage and shift with my time and talents,” she said.

“I am focussing on ways to distribute power and bring my creativity to make this revolution, irresistible. The gender gaps are foundational for me and patriarchy as a system just has to go, for all of us and our planet. It is toxic and is killing us all.”

So Simpson launched a Start Some Good campaign called the Equity Weaver Fund. It closes tonight, March 18, at around 7pm, and has reached its benchmark goal of $20,000, and has a stretch goal, so donations can still be made.

She said the fund set out to address one of the gaps  Moira tirelessly seeks to address – the lack of financial reward for people doing some of the most important systems change work.

“Moira has both system, business and community knowledge that gives a unique and valuable skill set which allows her more influence to create the conditions for system change,” she said.

“This is the work that she wants to do; this is the work that we want done; and we want to provide the conditions for this to continue. A momentum is building in SA because she is doing what she is doing – without compromise. If the State won’t fund it – and in a way her work would be less effective if it did (less conflict of interests involved) then we are testing whether we as a community can.”

Moira was caught off guard when the funding support was announced at the end of the impact summit she’d just facilitated with hundreds working in the space.

“It was the biggest surprise and conspiracy ever! I was gobsmacked and am thoroughly impressed at the level of trust that can bind a community together in keeping the secret from me,” she said

“It is now out in the open and closes soon and seeing I can’t seem to stop this momentum I might as well surrender, so if you want to chip in go ahead!”

Chip in for change with the Equity Weaver Fund here.