Online retailer Kogan.com is being sued by consumer watchdog the ACCC over false discounts claims 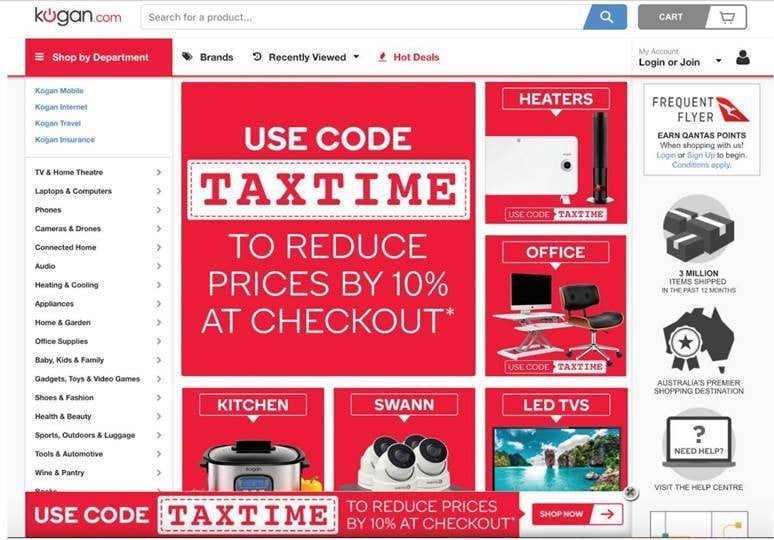 The Kogan.com promotion the ACCC alleges was misleading.

Internet entrepreneur Ruslan Kogan’s online retail empire has fallen foul of consumer watchdog the ACCC (Australian Competition and Consumer Commission), which is suing the business over false or misleading conduct claims, alleging Kogan increased prices ahead of a discount sale.

The ACCC has launched Federal Court action against Kogan Australia Pty Ltd and its Hong Kong arm, accusing the retailer of breaching Australian Consumer Law by increasing prices on 621 products, in most cases by at least 10%, just before it offered a 10% discount in June 2018.

The prices then dropped by 10% or more again on July 2 after the sale ended, the ACCC alleges in court documents.

ACCC Commissioner Sarah Court said said her organisation alleges the Kogan advertisements deceived consumers into thinking they were getting products below the usual prices.

“In fact, Kogan had inflated product prices which we say created a false impression of the effective discount,” she said.

The end of financial year sale ran between 27 and 30 June 2018, offering the discount with the code “taxtime”.

The promotion appeared on the website, in text messages to nearly 1 million customers and emails to another 25.7 million people.

Towards the end of the promotion, Kogan’s email advertisements used statements such as “48 hours left!” and “Ends midnight tonight!”, which the ACCC alleges gave the impression that consumers only had a limited time to purchase at the “discounted” prices.

In a statement to the ASX Kogan.com said it strongly denies the allegations and will defend the proceedings.

“The proceedings commenced by the ACCC ignore critical facts and matters which are in Kogan.com’s view highly relevant in assessing the overall impression of the promotion by consumers,” the company said.

“There was no confusion caused. Kogan.com has always put its customers’ interests first and continues to do so. Kogan.com cooperated fully with the ACCC throughout its investigation and explained in detail the above facts and matters. Kogan.com is disappointed that the ACCC has nevertheless decided to issue proceedings against Kogan.com.”

The Kogan.com empire has expanded its portfolio beyond retail since listing to include insurance, health, pets, travel, mobile phones, and internet services.

The online retail arm sells everything from consumer electronics to whitegoods, office equipment, furniture and toys.

The ACCC is seeking penalties, injunctions, declarations, corrective notices and costs from Kogan.

Previous article This travel website wants to make it easier to add leisure time to your next business trip
Next article CSIRO: The internet is ‘fundamentally broken’ when it comes to trust and malicious threats
Via Topics
Tags ACCCAustralian Consumer Lawfalse and misleading conductKogan