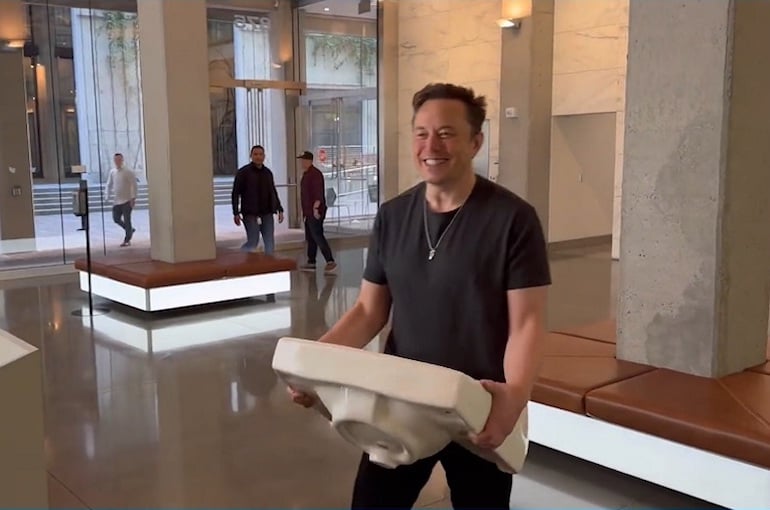 Sink in, slink out.

If share price is anything to go by, Tesla is in trouble. The market capitalisation of the electric vehicle (EV) company has fallen by 73% from its record high in November 2021, causing concern for investors.

On the face of it, there is no crisis. The cars are still the benchmark for performance. The underlying technology and the sophistication of the software remain preeminent. The supercharging network of fast EV charging stations is the envy of competitors. Its cutting-edge assembly plant and gigafactories (for large-scale production of EV batteries) support peak productivity.

Tesla’s direct-to-customer sales model has also allowed for rapid market penetration and was resilient under pandemic conditions. It continues to provide huge savings in fixed costs. The Model 3 – which is assembled in China, where costs are low, and has been presented as the brand’s first high-volume EV – has been successful. Tesla’s new factory in Germany, which makes its Model Y, was producing 3,000 cars per week by the end of 2022.

And after first reporting a profit in 2020 – following years of losses in a dash for growth – in the 12 months to September 2022 Tesla profits reached US$11.19 billion (£9.8 billion). This was more than double the previous 12 months. So why the concern?

Tesla’s position as market leader is being threatened by growing competition in EV production just as rumours have started to swirl that investors might be concerned about Musk’s ability to successfully lead both the car company and Twitter. He bought the social media platform last October following fraught negotiations with its board. He has since suggested he will step down as Twitter’s CEO but has yet to announce a timeline for that. Meanwhile, Tesla clearly needs more attention than it is currently getting.

Traditional vehicle manufacturers and new entrants are crowding into the EV market, encouraged by government mandates on ending sales of petrol and diesel cars. Tesla’s technology edge is being eroded, putting pressure on the premium positioning of the brand. Tesla has been fortunate in that supply constraints, especially in semiconductors, have thus far reduced this pressure. As those supply constraints ease, however, the pressure on Tesla will grow.

Tesla has also endured its own setbacks. Musk has been able to transition the company to true mass production, but he famously described the company’s new plants in Germany and Texas as “gigantic money furnaces”.

Musk has said he wants Tesla to produce 20 million vehicles annually by 2030, but this is enormously ambitious. The car maker has recently experienced production delays, supply shortages, controversies over its claims about the safety and development of its self-driving and Autopilot system, and vehicle recalls relating to a software issue affecting vehicle tail lamps “in rare instances”. The business has also suffered from turbulent COVID-related conditions in China – an important parts supplier – and 2023 is likely to continue to be challenging for many in the global automotive industry as the world’s major economies slow down.

Production needs to be increased rapidly to meet Musk’s delivery promises, but without compromise on quality. The challenge thereafter will be to expand the brand to smaller vehicle types than the Model 3, while retaining the cachet that allows for premium pricing.

With nearly 100,000 employees worldwide, Tesla will also need to be more cost conscious. This is especially true as material and component input prices are rising rapidly.

Tesla also needs to do more to capture value from cars that are already in use. The company is notable for owning much of the inbound supply chain for its batteries and their materials, but it has been slow to identify earning opportunities from the entire life cycle of its cars. Competitors including VW Group and Renault in Europe and NIO in China are pioneering new “whole life cycle” business models that capture value for manufacturers from the sale, use, second use, and eventual recycling of vehicles. This makes Tesla’s “sales only” approach look dated.

Investor sentiment is obviously key when it comes to Tesla’s declining share price, however. The company could manage this by being more cautious when announcing forecasts for production, sales, new models and technology breakthroughs to avoid surprising or disappointing investors.

With this in mind, it’s not surprising that, for investors, the biggest issue to be resolved at Tesla may be Musk’s role. There are two questions involved: is Musk sufficiently engaged in the future of Tesla and can Tesla continue to prosper from association with Musk?

In Tesla’s latest tranche of stock sales in December 2022, Musk reduced his share of the business to 13.4%, although he remains the largest single shareholder. Some observers linked this sale to the need to finance other business interests, notably Twitter.

The risk is that Musk becomes more of a liability than an asset to the business. While also running Twitter, Musk may not be able to give Tesla the attention it needs as it grows, and as its competition becomes more intense. But Musk’s maverick personality, and especially the management style he’s displayed while running Twitter, could potentially damage the Tesla brand and unnerve Tesla employees and investors.

Indeed, the characteristics that have made Musk such a successful disrupter may not be so appropriate for a maturing and institutionalised multinational. Musk and Tesla have long seemed synonymous. It seems that the time may have come for that to end.

Professor Peter Wells has vast experience of research into the global automotive industry around which he has developed his academic and theoretic interests in socio-technical transitions, business models, cultures of automobility and sustainability.