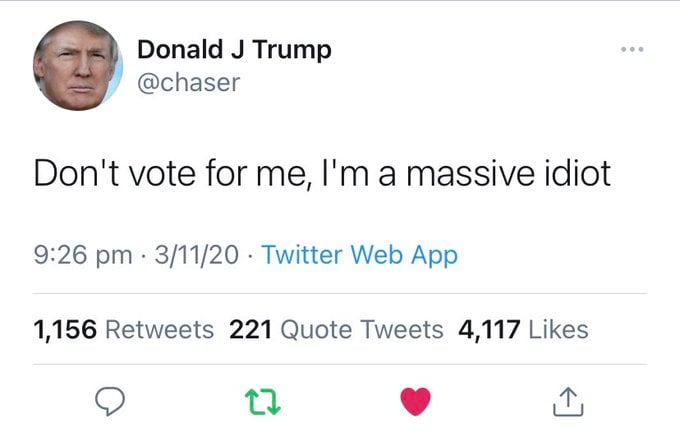 Australian comedy and satire group The Chaser have had their verified account suspended by Twitter overnight after @chaser changed its name to Donald J Trump, including a photo of the US President and wrote “Don’t vote for me, I’m a massive idiot”. 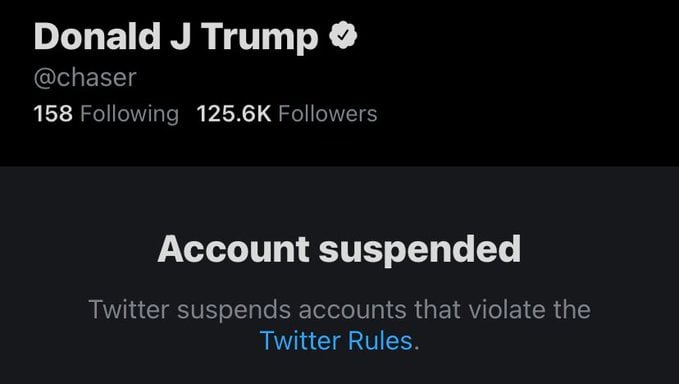 Twitter’s response was surprisingly quick given it occurred while most of the US population was sleeping. Within 30 minutes, the @chaser account, with around 126,000 was unverified and then suspended. The account was reinstated just after 10am today, but is now unverified. The original tweet about Trump remains.

It’s not the first time they’ve been in trouble over a US president. In 2007, when George W Bush was visiting Sydney for the APEC Summit, the Chaser comedy group drove a fake motorcade through security checkpoints with Chas Licciardello – now covering US politics and the election on the ABC TV series Planet America – dressed as Osama bin Laden. They were arrested outside the hotel after “Osama” jumped out of the car and began walking away.

On the weekend, a video of a Joe Biden saying “Hello Minnesota” that was doctored to make it look like he was in Florida – part of an ongoing campaign to portray the Democrat presidential candidate as confused – was widely shared by verified Trump supporters and was viewed more than 1 million times. Twitter added a “manipulated media” warning several hours later before it was eventually removed after Associated Press fact checked it.

Fake videos of Biden have been a hallmark of the Trump campaign with the President himself tweeting a fake video of Biden supposedly endorsing him, with attracted more than 6 million views. Again Twitter simply labelled it ‘manipulated’.

Trump has more than 87.4 million followers.

Another fake video using footage of a Harry Belafonte interview where he was asleep, superimposing Biden in his place, also stayed on the microblogging site before it was suspended for copyright reasons.

With voting in the US election on today, it appears Twitter is flat out dealing with misinformation on its site.

A Twitter spokesperson confirms the company has taken action on multiple tweets and videos containing potential election misinformation in Pennsylvania.

Cam Smith, editor of The Chaser.com.au sister satirical site The Shot that he could understand Twitter’s response to their mocking of Trump.

“After all, it would not be out of the ordinary for Trump to tweet something so outlandish. If anything this would have been one of his more reasonable tweets, so we could see how people might get mixed up,” he told The Shot.

“It’s impressive that Twitter only took 20 minutes to unverify our tweet – given it took them almost four years to start fact checking the actual President. I guess that’s to be expected though, we all know comedians words are much more dangerous than those of the guy who controls 50% of the world’s nukes.”

The reason for the suspension is unclear but likely to

Twitter’s approach to policing what appears on its site is as confusing as it is controversial.

Straight blocking of URLs was wrong, and we updated our policy and enforcement to fix. Our goal is to attempt to add context, and now we have capabilities to do that. https://t.co/ZLUw3YD887

The NY Post’s account was reinstated a fortnight later with the publication making the story front page news.

Previous article 4 months after Open Banking launched in Australia, a new report reveals the fintech sector is keen but struggling to get involved
Next article Hotel bookings site Trivago has lost its appeal over misleading consumers
Via Global tech
Tags free speechnewsThe Chasertwitter