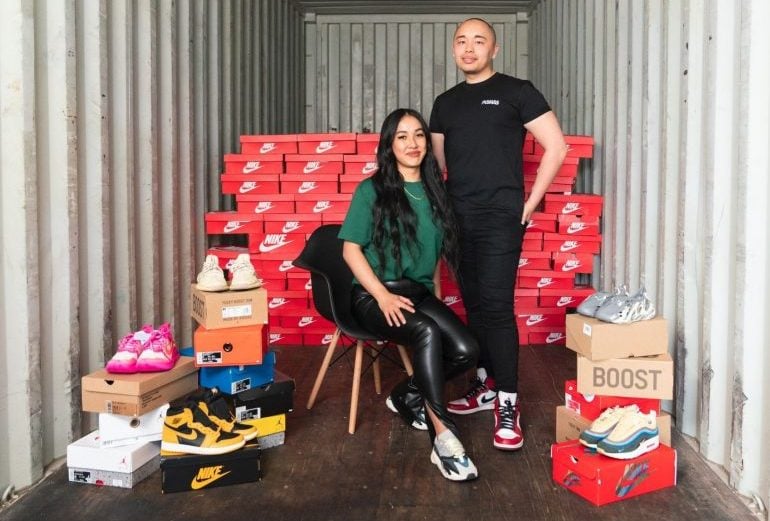 Move over Banksy. While the anonymous UK street artist is grabbing headlines today after his semi-destroyed artwork, Love is in the Bin, sold for $34 million a Sydney sneaker marketplace has raised $1.2 million in a pre-seed round.

PUSHAS was founded in 2017 by Justin Truong and Sandy Li and offers a secondary market for sneakers, which Truong describing them as “an alternate asset class”.

The global secondary market for sneakers since US pioneer StockX kicked off five years ago is now worth nearly US$10 billion. The Australian market reportedly represents a staggering 10% of that figure. Estimates are the total market will hit US$30 billion in value by the end of the decade.

The impressive roster of tech investors in the nascent ecommerce startup suggests many agree it’s a good bet.

The cash injection will allow the business to build out a better liquidity algorithm – PUSHAS underwrites the sneakers for sale to give sellers guaranteed liquidity – as well as for scaling the local operations before a push into international markets.

This liquidity proposition is underwritten by the PUSHAS Sneaker Fund – the world’s first sneaker investment vehicle – which has risen in value by 52.8% growth since its inception 12 months ago.

PUSHAS CEO Justin Truong said the round was oversubscribed within a few days with more than three times the original ask in commitments from Australia and US investors.

“Our mission is to unlock the potential of sneakers – by building a seamless, trusted platform that empowers and pushes boundaries,” he said. “The secondary sneaker market’s growth continues to accelerate drastically and we’re confident PUSHAS is perfectly positioned to power the economy of hype.”

He describes the business as a “hype infrastructure platform”. It’s designed more for volume resellers that a one-off Drake Edition Air Jordan 12 OVOs.

The marketplace is already selling thousands of sneakers a month in Australia and New Zealand and the PUSHAS platform handles channel management, sales distribution, authentication, warehousing, and fulfilment, as well as the liquidity proposition.

“This empowers the sneaker reseller to earn sizable income through the PUSHAS managed platform,” Truong said.