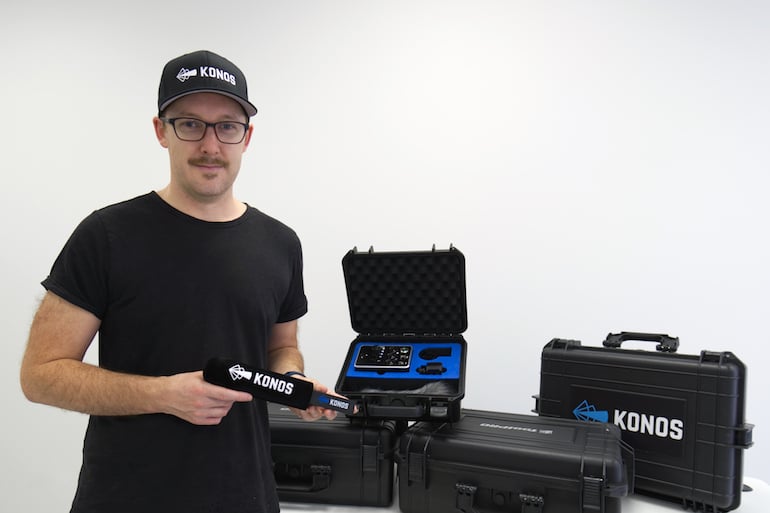 The cash will be used to boost production of Dotterel’s high-end Konos microphone, which is built using an array of 80 digital microphones. It’s able to capture the target audio signal with exceptional clarity from any direction and over long distances, while also eliminating undesired sounds from noisy machinery, crowds or weather.

Co-founder and CEO Shaun Edlin, who met his co-founder when they worked together at Lanzatech, said the funds will also be used to expand into new markets focussed on public safety and industrial manufacturing. He said Konos can be mounted onto emergency vehicles and within factories to improve safety, workflow and communication.

Leading entertainment studios in the US and UK have been using early versions of the 23-cm long Konos to improve audio recordings in noisy environments. Konos pre-production units are currently being sold and evaluated by select end users, with a larger general release slated for later this year.

“We are opening up a whole new world of capturing and communicating sound with the biggest breakthrough in decades ,” he said.

“Dotterel is transforming the way we listen and talk to machines and people. We can capture mission-critical audio clearly and from a safe distance, mounting Konos onto police cars, drones and other machinery, which can boost public safety and ultimately save lives.”

He said Konos can be used as an  “Amazon Alexa” for industry, using voice automation to facilitate valuable two-way communication between the operator and the microphone’s location and believes there are market opportunities of US$1 billion in entertainment and US$500 billion for industrial applications.

Icehouse Ventures CEO Robbie Paul said: “The strength of the Dotterel team, born from New Zealand’s first ‘deep tech’ unicorn Lanzatech, combined with their vision to improve and save lives puts the company on track to be New Zealand’s next major exporter of ground-breaking technology.

Rocketlabs’ Peter Beck said it was exciting to see another breakthrough development pioneered in New Zealand.

“Dotterel has developed a highly differentiated product, filling an unmet need for small, portable, high-fidelity microphones in the many industries constrained by sound recording challenges,” he said.