Melbourne construction tech startup BuildPass has raised $1 million in a pre-seed round.

The raise was backed by local construction industry companies and strategic US-based investors with the company looking to expand into the US market in the next 1-2 years.

BuildPass was co-founded by Matt Perrott and Aaron Vanston, who met with principle engineer, James Formica, when they were working together at realestate.com.au and built the Spacely product togther.

The oversubscribed pre-seed round will be used to grow the team, accelerate product development and expand nationally ahead of the company’s international ambitions.

Matt Perrott said they’re now looking for designers and engineers to grow with the company and execute on their plans.

“We’re stoked with the amount of support for BuildPass. We set a target of $550,000 but always said we’d take up to double that,” he said.

We were lucky to get it all wrapped up in less than 4 weeks, start-to-finish, allowing us to move 100% focus back to the product and customers.” 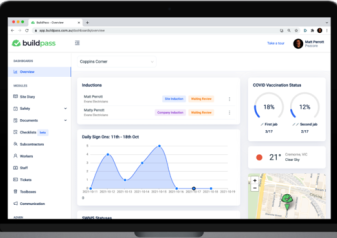 Their app and web-based platform launched in beta mode in June and has recently opened to the public. The app is designed to make managing construction sites safely and more efficiently.

“BuildPass integrates the builder, the subcontractor and the workers into a single connected platform,” he said.

“When it comes to high quality software, the small guys have been overlooked. Current solutions are clunky, complex and only solve part of the problem.

“We’re leveraging our experience from ASX-listed tech companies to build a world-class technology platform that’s laser-focused on the user experience of both the builder and the worker.”

Perrott said they took inspiration from digital disruptors such as Xero and Up to tackle the construction sector.

“Both companies have disrupted industries characterised by antiquated software solutions; BuildPass is doing the same for construction,” he said.

“Unlike most construction tech businesses, we’re highly focussed on design and engineering. We don’t believe in hiring a large sales team to sell our product. Our strategy is to delight our customers and focus on product-led growth. The smart onboarding experience also means we don’t need to charge customers implementation fees.”

The business was bootstrapped until now, with the platform built by the founders and early team members in less than six months.

BuildPass now has paying customers ranging from small residential builders to medium-size commercial builders. We’re lucky to be working with some of the country’s most highly-respected architectural builders, like Dome Building Projects and Visioneer Builders.