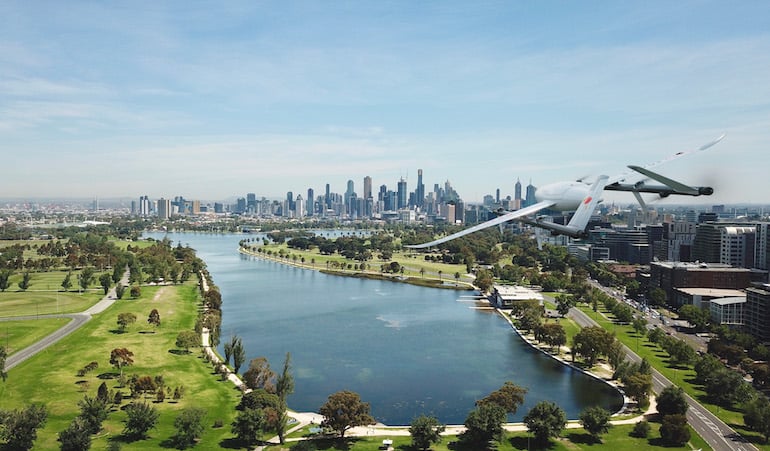 Drone delivery venture Swoop Aero has raised $16 million in a Series B as it looks to expand into new markets.

The round was led by the CSIRO’s VC fund Main Sequence, with support from Melbourne impact fund Giant Leap and US investor In-Q-Tel, the defence tech investment arm of the CIA. Artesian and Folklore Ventures backed the venture for a third time.

CEO Eric Peck said the company had strengthened its relationship with manufacturing partner Quickstep Holdings, after accepting a strategic investment amid scaling up the manufacture of the Kite aerostructure in Port Melbourne site during 2022 and 2023. The Kite can fly up to 175km on a single charge, carrying a payload of up to 5kg.

“We’re thrilled to have the support of such exceptional VC funds as we expand our integrated logistics networks across the globe and look to scale these networks to stack and deliver services that will transform how the world moves,” Peck said.

“Swoop Aero makes it possible today, and our goal is to scale that infrastructure layer country by country, so our integrated drone logistics service reaches 1 billion people by 2030.”

Peck said they are working with the US Federal Aviation Authority (FAA) and the Civil Aviation Safety Authority (CASA) on a world-first joint drone certification project that will enable the seamless integration of drone technology across urban and rural environments globally.

“With over 15,000 successful flight operations across 12 different countries, advanced Australian manufacturing capabilities and Type Certification underway of our most advanced aircraft, the Kite, Swoop Aero will continue to rapidly scale networks across all environments to establish a new infrastructure layer in cities and regions alike,” he said.

Main Sequence partner Mike Nicholls said: “Every time a Swoop aircraft takes off, it eliminates the cost, time and emissions needed to send a delivery by vehicle. Swoop Aero is leading the way, benchmarking the future of logistics technology and aviation, in turn making high impact, equitable and quality logistics networks a reality.”