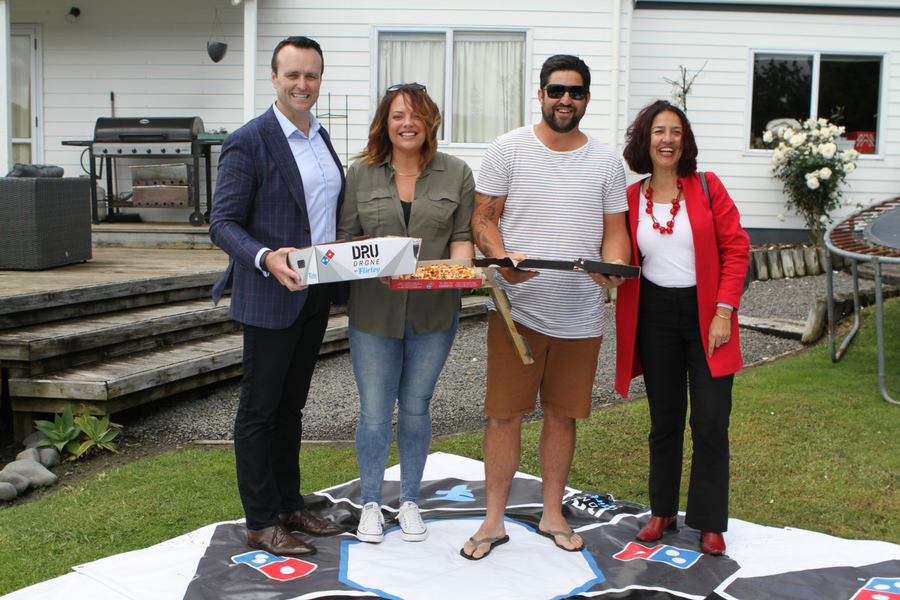 There are great times to b,e had in New Zealand – if you’re not swayed by the rolling green hills of Hobbiton, then surely you’ll find temptation in Domino’s new commercial pizza delivery by drone.

Australia’s leading drone startup Flirtey earlier this week conducted the world’s first ever delivery of Domino’s pizzas to the doorsteps of its customers in New Zealand. The two companies worked together on the first delivery trials in August, and now three months later the service is open to the public.

Domino’s Pizza delivery via Flirtey’s DRU Drone is now available to select customers, and the two companies are planning to expand deliveries at an increasing scale in the near future.

New Zealand was chosen as the world’s first launch market for commercial delivery trials as its current regulations allow for businesses like Domino’s to embrace the opportunities that unmanned aircrafts bring to both sides of the market.

Don Meij, managing director and group CEO of the Domino’s Pizza Enterprises, said the company’s growth over the past few years has led to a significant increase in the number of deliveries. He revealed that the company is constantly on the lookout for new innovative and futuristic ways to deliver pizzas to its customers.

Domino’s is making all this possible through leveraging Flirtey’s autonomous technology, safety systems and special packaging, all designed to complete deliveries across a variety of weather conditions and flight paths in suburban environments.

“To conduct these deliveries in an urban environment while delivering a hot, fresh pizza, is a ­­­validation of our delivery system that assures Flirtey is prepared for mass market deliveries around the globe.”

A recent Domino’s customer poll found that 70 percent of existing customers would use DRU Drone by Flirtey for their deliveries.

“We invested in this partnership, and technology, because we believe drone delivery will be an essential component of our pizza deliveries, so even more customers can receive the freshest, hottest pizza we can offer,” Meij said.

“Drones offer the promise of safer, faster deliveries to an expanded delivery area, meaning more customers can expect to receive a freshly-made order within our ultimate target of 10 minutes. This is the future.”

The use of DRU Drone by Flirtey as a delivery method is designed to work alongside Domino’s current delivery fleet and is being fully integrated into online ordering and GPS systems.

The event was attended by the Civil Aviation Authority and the New Zealand Minister of Transport, Simon Bridges. The first deliveries were received by everyday regular customers, Emma and Johnny Norman.

The on-demand delivery service, developed by Flirtey, demonstrates a new era of commercial delivery and with it, has the potential to transform customer experiences and expectations, not only in New Zealand, but across the globe.

This of course brings up the question, when will this service be available in Australia? With drones already being used in mining and agricultural industries, when will we see them delivering food, clothes and other deliverable items?

Over the last year in Australia, drones have taken a more serious look at the benefits they can provide consumers, and have been testing medical supply delivery to remote communities. The Angel Drone is set to commercially trial its service in rural NSW before the end of this year.

Leading neurosurgeon Charles Teo is the ambassador for a new project to deliver supplies such as blood and organs by unmanned aerial vehicles to areas not easily accessible by people on the ground.

“We chose that title [Angel Drone] because we believe that although drones have been used for industries such as mining and unfortunately war, it’s about time we utilised that technology for the betterment of mankind and the greater good,” he told the ABC.

Teo also explained that there are various uses for drones in Australia but he believes that the regulation around drone use remains the final obstacle.

“Once the regulations are in place, and I think that’s a huge hurdle that we need to jump, then we’ll be able to transport not only specimens, but human tissue, human organs and even humans themselves through drones.”

According to Teo, those in remote communities could expect the Angel Drone service to be up and running within 12 months.

To watch the video of the first commercial Domino’s Pizza delivery via Flirtey drone, click here.