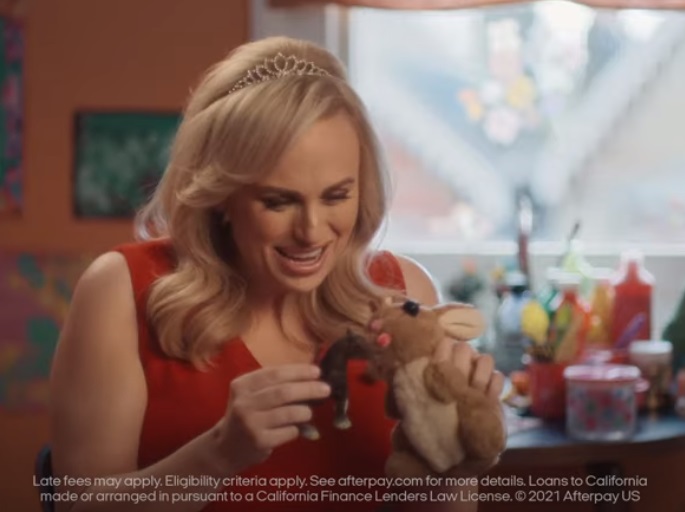 A screenshot from the Rebel Wilson Afterpay ad

Peak body Financial Counselling Australia (FCA) has written to advertising regulator Ad Standards asking for Afterpay’s TV ad featuring Rebel Wilson to be banned over its “gratuitous and inappropriate” use of a children.

The ad features Wilson sitting in a play room with a young child saying “if credit cards and cash had a baby you could pay it over time without ever paying interest”.

FCA CEO Fiona Guthrie says the ad is “a step too far”.

“It minimises the risks of using buy now pay later products and the fact she is talking to a young child, explaining a credit product, is very disturbing,” she said.

The complaint to Ad Standards seeks a review, requesting it be pulled from screens.

“The advertisement does not explain how the product actually works. What Ms Wilson doesn’t say is that if you miss any of Afterpay’s instalment payments, you will incur late fees.”

Late fees can be up to 25% of the purchase price.

The FCA complaints says the ad lacks “a sense of social responsibility” and glosses over the risks and harms of the product.

A 2020 ASIC report found that 20% of Buy Now Pay Later customers have delayed payments of essential costs –including food –in order to pay back their BNPL debts.

“Why these celebrities want to associate themselves with a product that can cause such harm is beyond us,” she said.

“These slick and expensive campaigns only serve to lull consumers into using buy now pay later more. There is a high risk of getting into debt, especially if you are using the product multiple times or have more than one account.”

Guthrie said BNPL services should be subject to the same laws as other forms of credit.

“They need to be regulated under the National Credit Act,” she said.

Afterpay issued a statement saying the ad was designed to spread awareness of its product by explaining key features in a light-hearted and relatable way.

“The scene that includes a child and parent is a humorous way for Afterpay to demonstrate the simplicity and transparency of our product, especially when compared with much more expensive and risky products such as credit cards,” a spokesperson said.

Ad Standards Australia has responded to the FCA saying the ad complies with its standards.

The FCA complaint is here.

Previous article ‘We just don’t have time for that’: why prioritising mental health is a cornerstone to startup success
Next article Crowd-sourced funding is booming in Australia
Via Fintech
Tags Ad StandardsAdvertisingAfterpayBNPLnews