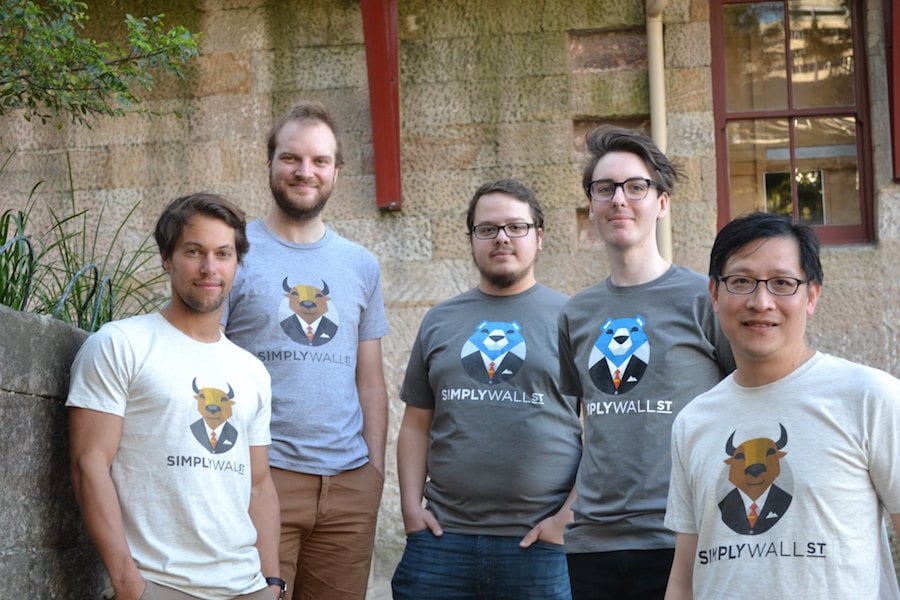 Sydney-based startup Simply Wall St, which makes the stock market easier to navigate, has just announced the closing of a $600,000 funding round led by Mike Quinn from Innovation Capital, with participation from Sydney Angels and their Sidecar Fund. This brings the total amount raised by the startup to $700,000, including the original investment from AWI ventures.

For the uninitiated, the stock market is like a game of roulette – it will either bring huge monetary gains or devastating losses. Simply Wall St, essentially a visual investing application, was created to help novice investors understand the true nature of stock market investment, rather than get confused by all the numbers, abbreviations and conflicting theories about why stock value fluctuates from day to day, available on the internet.

When you visit simplywall.st, you’ll instantly notice the graphics. Unlike other websites and applications that present numbers, spreadsheets and graphics, Simply Wall St presents ‘snowflakes’ which encompasses five key variables: income, value, future, past and health. Inside the snowflake is more or less a blob, whose shape depends on these variables. When you hover your mouse over different parts of the snowflake, a box pops up providing a rating out of six for each variable. 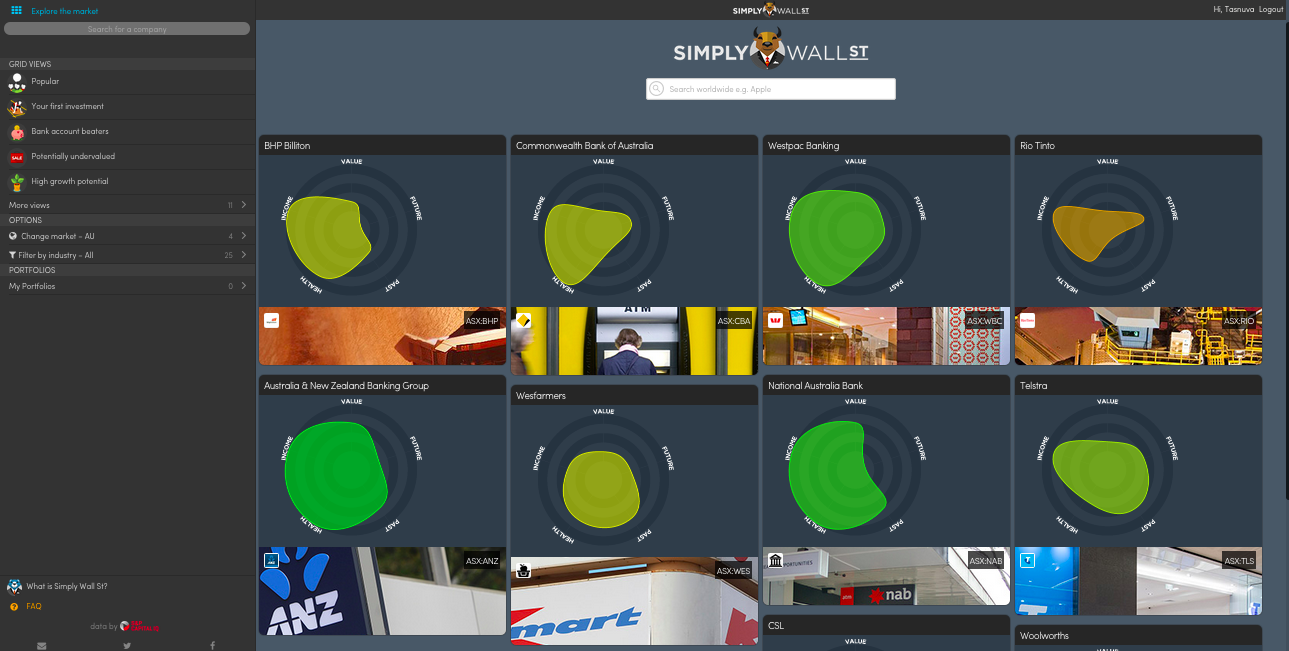 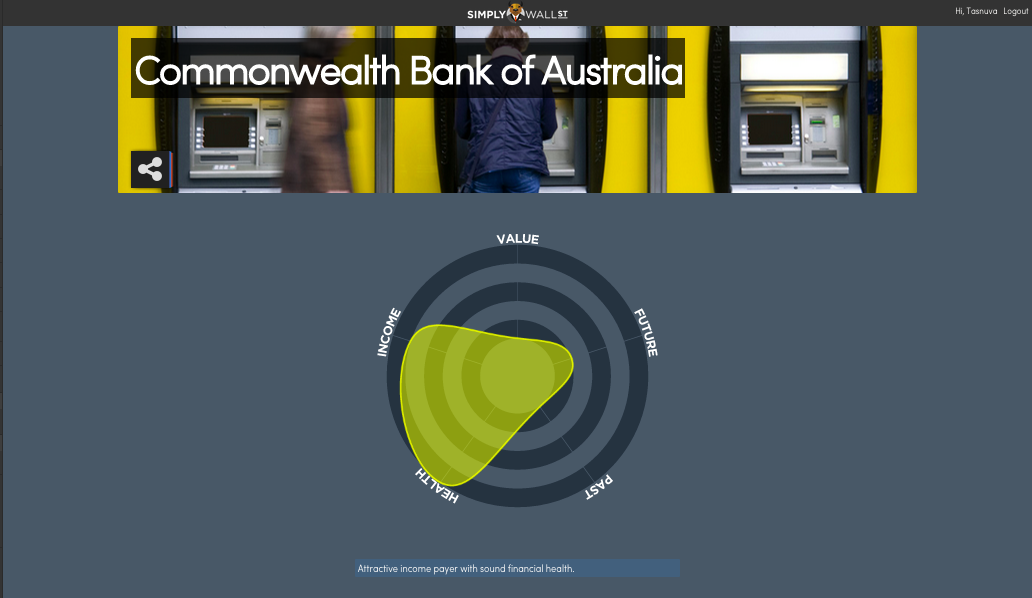 The reason why Simply Wall St is so powerful is because it aligns with the way the human mind works. In his book Ways of Seeing (1972), media theorist John Berger said people think using pictures: “Seeing comes before words. The child looks and recognizes before it can speak.”

People can process images better than numbers, words, graphs and bulleted lists, and so it’s much easier to understand a shape – in this case, a ’snowflake’ – than to explain it.

Dr. Lynell Burmark, who’s written many papers and books on visual literacy, once said, “[…] unless our words, concepts, ideas are hooked onto an image, they will go in one ear, sail through the brain, and go out the other ear. Words are processed by our short-term memory where we can only retain about 7 bits of information (plus or minus 2) … Images, on the other hand, go directly into long-term memory where they are indelibly etched.”

One of the main purposes of presenting financial data in a visual format is to empower investors to manage their own investments instead of paying someone else to do it for them. In fact, one of the main reasons why advisors and fund managers are able to charge exorbitant fees is because there is very little decipherable information available to investors.

Simply Wall St has been in beta since November last year. The startup was founded by Al Bentley, who roped in co-founder Nick van den Berg after a serendipitous meeting in Perth. Bentley and van den Berg were both self-taught stock investors who had a painful, mistake-ridden experience when investing in stock. After being accepted into AWI Ventures’ FinTech accelerator in July last year, the duo decided to commit themselves fully to Simply Wall St.

“Apart from simply being far larger than Australia in terms of population the other reason is due to there being a lower level of mandated saving (superannuation),” Bentley explained.

“Investors especially in the US really do have to take things into their own hands. Those countries also have better online social channels for investors such as Stocktwits and Seeking Alpha, which is where people end up sharing our content.”

On a daily basis, Simply Wall St produces over 9,000 detailed infographics and visual analyses on all the companies listed on primary US, UK and Australian stock exchanges. The financial data is provided by Standard & Poor’s Capital IQ.

Added to that, more than 2,000 portfolios have been created on the platform since the startup introduced a feature that enables users to visualise their portfolio and individual stocks.

“I think it’s because many of our beginner users don’t realise the level of analysis that goes on behind the scenes to produce the infographics, whereas experienced investors do. That and they just like the visual appeal!” said Bentley.

Simply Wall St is not the only FinTech startup hoping to encourage millennials – who hold a bulk of their assets in cash and prefer saving over investing – investing in the stock market. Startups like Acorns and FirstStep are also attempting to get millennials investing their virtual loose change into a diversified portfolio of index funds.

A UBS study published in January 2014 called Gen Y the “most fiscally conservative generation since the Great Depression.”

“Millennials seem to be permanently-scarred by the 2008 financial crisis,” said Emily Pachuta, Head of Investor Insights, UBS Wealth Management Americas, in the report.

“They have a Depression Era mindset largely because they experienced market volatility and job security issues very early in their careers, or watched their parents experience them, and it has had a significant impact on their attitudes and behaviors.”

To really change the attitudes of millennials – transform them from post-recession conservatives to savvy risk-taking investors – requires education. Apps like Acorns, FirstStep and Robinhood don’t adequately educate novice investors. Though using these apps certainly makes the process of investing small amounts easier, making educated investment decisions yourself means you don’t have to pay any fees.

“Funnily enough we get a lot of emails from users who have downloaded apps like Robinhood and then lost money. This isn’t really a surprise as these apps still fall into this trap of expecting users to know what to buy and how to research their own stocks, and this is where Simply Wall St comes in,” said Bentley.

The new funds raised will help the startup in its mission to “to empower causal and beginning investors to make profitable long term investment and actually understand the stock market.”

Specifically, the new funds will be used to take Simply Wall St out of beta, develop a native mobile application, start monetisation and expand into the UK and US markets. It will also be used on marketing activities and recruitment.

“Most importantly, Nick and I can take a small salary, which is a relief after more than a year without one!” Bentley admitted.

Simply Wall St’s monetisation plans haven’t changed; it will operate on a freemium model. Bentley said there will always be a free version that works for the majority of users, but there will be a ‘pro’ version that includes premium features and limited free brokerage.

“The idea [is] we don’t stop people [from] using it because of the paid version; rather the 10-20 percent of power users who want to access those advanced features [pay],” said Bentley.

Simply Wall St has also caught the eye of big players in the market, one of them being National Australia Bank’s online trading arm nabtrade. The institution is currently testing Simply Wall St’s Snowflake Widget API, which could become a permanent fixture on nabtrade’s broker trading platform.

The startup is gearing up to launch an affiliate scheme and a collection of tools for financial bloggers, which will allow them to integrate Simply Wall St’s infographics into articles and earn money off referrals.

Previous article After being screwed over by developers and losing $500,000, Where4Events is on track to becoming Australia’s largest event aggregator
Next article The number of women-led tech startups is growing despite lack of STEM skills
Via Advice
Tags AustraliafeaturedfinancialfintechSimply Wall Ststartupstockstock marketSydney