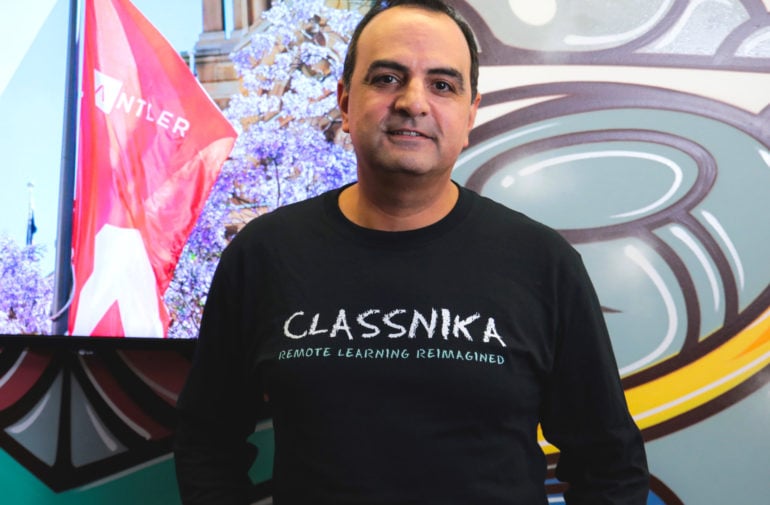 Education was one of the many industries to experience a massive shift to online programs and platforms in 2020.

While online learning isn’t new, many of the platforms that were being used by students such as Zoom or Google Hangouts, simply weren’t built for an educational purpose. It was this problem that led Dr. Ramtin Shams, a former academic and educator, to develop Classnika.

Co-founder and CEO, Dr Ramtin Shams believes Classnika can remove existing barriers to remote learning and make it as effective as in-person learning.

“In 2020, we were seeing that a lot of children, parents and teachers were not prepared for the remote learning that was forced on them despite the fact that remote learning can be really efficient because it removes the need for you to drive around and ferry children to extracurricular activities,” he said

“The other issue was that everyone just started using enterprise tools like Zoom or Meet and Dropbox which weren’t really designed for educational purposes.

“Children, in particular, couldn’t really operate this technology and it wasn’t suited for their needs, therefore, we as parents had to step in all the time, had to be involved in the running of the classes and making sure that the discipline was there. It became really time-consuming and tiring for everybody involved.”

Ramtin designed Classnika to be the only tool a child needs to participate in remote learning. A lot of thought and effort was put into a virtual classroom facility taking into consideration multiple elements, specific to each educational subject, that traditional web conferencing software simply could not.

“Classnika takes a novel approach to the way remote learning is being delivered as we customise the environment, the toolset for the specific subject at hand and then provide the controls to the teacher to allow them to effectively manage that class as if they were present in person,” Ramtin says.

“We look at the age groups that are involved and the needs are very different. So, if you’re looking at early primary, the way they interact with the system is very different if you’re talking about somebody in high school or if somebody is in college.

“For example, if you’re doing a maths class and your child is writing, it is more natural for them to write on a piece of paper as opposed to sharing a screen with someone and then writing on a digital screen. You want them to write at that sort of age so using the technology that is out there was not appropriate.

“We started using multiple cameras so we could maintain facial contact with the teacher all the time and that also changed the discipline in the class because now the child feels that at any moment the teacher is watching them. The multiple camera setup also allows us to deliver difficult subjects such as music and arts effectively and in a more immersive manner.”

The competitive nature of the online education market has also seen Ramtin’s team overcome a number of challenges getting the software to the required go-to-market level.

“We set ourselves really big targets and as a result of that, we’ve had to put a lot of effort into preparing the technology that allows us to deliver quality services to teachers, parents and students,” he said.

“These days the bar is really high so if you’re going out with something that does video conferencing, the bar that you have to meet is Zoom even though you might be a small startup that’s just springing from its roots. The expectation on the client’s side is always that your service meets and even exceeds the best technology that they’ve used before. And we have met that expectation time and time again.”

Classnika was built with and invested in by Antler, a global early-stage VC, and it’s something that the team says was a critical part in the early stages of building the business.

“Antler has really accelerated our understanding of the business environment. The go-to-market strategy, we’ve had fantastic advisors around go-to-market and ways of connecting people. We’ve had a lot of consultation around a strategy through Antler,” says Ramtin.

“Raising capital has been a big subject and it’s something that all the startups really depend on. So all of those factors have really helped us to get to the next stage and put us on a path to know what we need to do in the next six months and beyond.”

Going forward, Dr Shams has lofty goals for where he wants to take Classnika.

“In five years’ time, what I would like to see is that we have removed a lot of boundaries in terms of quality education and when people make a decision on remote and in-person delivery they choose remote learning as they find it as good as in-person learning but more efficient,” he said

“We want to democratise quality education. So it’s not where you are and how much money that you have that could determine the future of your children. For a fraction of the cost, you should be able to get quality education wherever you are and in doing that you should not be contributing to global warming, you should not be unnecessarily driving your children around and contributing to traffic and also missing out on a lot of productive hours.

“Our mission is to make this as real as in-person learning and with the advancement in artificial intelligence, in AR and in VR, don’t be surprised if your child is practicing piano with their teacher virtually sitting next to them on Classnika, in not-too-distant a future.”