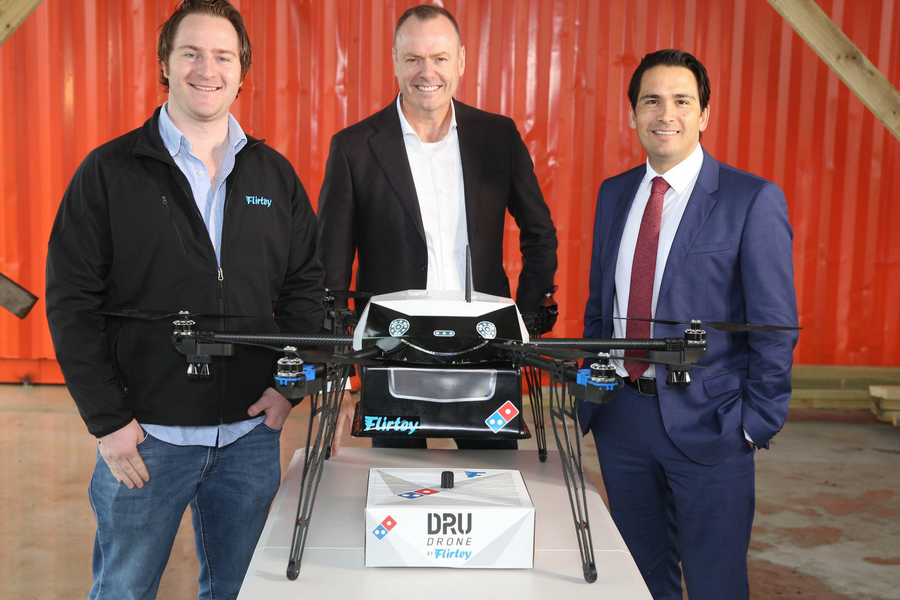 As part of Domino’s and Flirtey’s test trial, a demonstration of pizza delivery by drone took place in Auckland today. The trial was attended by the Civil Aviation Authority and New Zealand Minister of Transport, Simon Bridges and was conducted under Civil Aviation Authority Rules Part 101. This marks the final step in Flirtey’s approval process in New Zealand, and flights to customer homes are expected to start later this year.

New Zealand was chosen as the world’s first launch market for pizza delivery services by drone as its current regulations allow for businesses like Domino’s to embrace the opportunities that unmanned aircrafts bring to businesses and consumers.

Don Meij, managing director and group CEO of the Australia-based Domino’s Pizza Enterprises, the largest global franchisee of the Domino’s pizza brand with over 2,000 stores across Australia, New Zealand, Europe, and Asia, said the company’s growth over the past few years has led to a significant increase in the number of deliveries and the company is constantly on the lookout for new innovative and futuristic ways to deliver pizzas to its customers.

“Research into different delivery methods led us to Flirtey. Their success within the airborne delivery space has been impressive and it’s something we have wanted to offer our customers,” he added.

The delivery method that Flirtey provides has been designed to work alongside Domino’s current delivery fleet and will be fully integrated into the Domino’s online ordering and GPS system.

“Domino’s is all about providing customers with choice and making customer’s lives easier. Adding innovation such as drone deliveries means customers can experience cutting-edge technology and the convenience of having their Supreme pizza delivered via air to their door,” explained Meij. 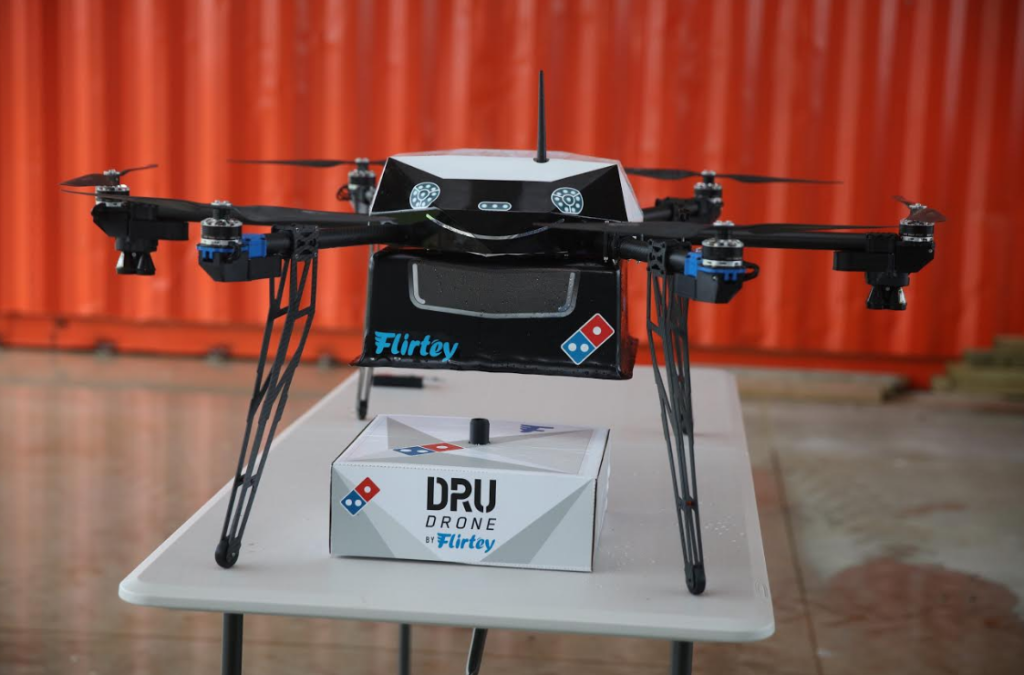 Utilising drone technology allows businesses like Domino’s to reach more customers at a rate that has yet to be achieved via traditional methods like cars, scooters and bikes. Drones enable businesses to remove barriers like traffic and access, as well as offering faster and safer delivery options. This also means that businesses can extend their delivery services to rural and regional customers who would normally not have access to such services.

Flirtey has also been experimenting with 7-Eleven in the US and in July this year the drone startup made its first home delivery in Nevada. The delivery represented a historic milestone for both US drone delivery and global commerce. It also marked a string of commercial deliveries that are pushing the startup closer to its goal of creating the world’s largest delivery process for humanitarian, online retail, and food delivery industries.

Domino’s partnership with Flirtey is yet another advancement into innovation for the company. In the last year Domino’s has looked to technology to exceed customers expectations and has now become one of the most technologically advanced fast food chains in the world. The business reinvented and revolutionised itself by transforming from a pizza delivery company and into a technology company.

Domino’s created an app that allows orders to be conducted via voice, social media and even pizza emojis. Yes, customers can request their regular pizza order by simply sending Domino’s a test message in the form of a pizza emoji.

The effect technology has had on Domino’s is evident through its performance and levels of customer satisfaction. Between 2006 and 2008 the company was in $1.7 billion in debt. At the start of 2008 Domino’s share price hovered over $10.6, and it was clear the company was struggling. However, since its adoption of technology Domino’s share price has skyrocketed to $131.6, which was recorded in March this year.

The shift and refocus of companies into ones driven by technology has also been recently adopted by Telstra. In July this year Telstra rebranded from a telco company into a tech company with the aim of reflecting its new vision of a connected world and to highlight its support for the startup ecosystem.

Domino’s interest in the startup community and technology is evident through the company’s investments into electric scooters, e-bikes and even the Domino’s Robotic Unit, DRU, that was launched earlier this year.

“We’ve always said that it doesn’t make sense to have a 2-tonne machine delivering a 2-kilogram order,” said Meij. “DRU DRONE is the next stage of the company’s expansion into the Artificial Intelligence space and gives us the ability to learn and adopt new technologies in the business.”

Domino’s latest investment into Flirtey will commence later this year following the beginning of daylight savings in New Zealand.

“We are working with Flirtey to ensure quality is a priority during the trials and are confident that customers will be excited by a drone delivering their pizzas from the store to their door.”

Domino’s will be offering Drone Delivery Specials at the launch of the trial with the plans to extend the dimensions, weight and distance of the deliveries throughout the trial based on results and customer feedback.

“These trial deliveries will help provide the insight we need to extend the weight carried by the drone and distance travelled,” Meij explained. “It is this insight that we hope will lead to being able to consider a drone delivery option for the majority of our orders.”

The world is just starting to open its eyes to the possibilities of drone services and the impact they will have on both small and large businesses. Along with Nevada, New Zealand has become one of the only places in the world to allow for the gradual testing of this new and innovative technology. Given Flirtey is an Australian startup it’s about time that unmanned aircraft regulations are reassessed to allow such testing to happen in our own country.