Luna eclipsed: Behind the collapse of the algorithmic stablecoin TerraUSD 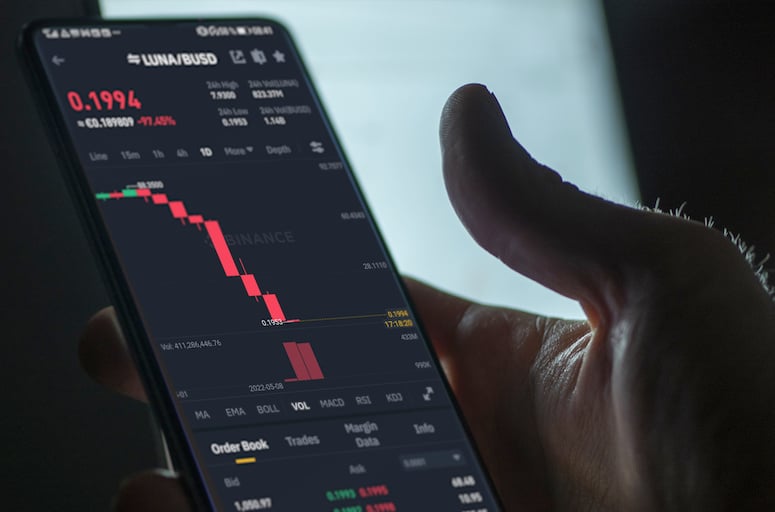 Over the course of a few days last week, we saw what was perhaps the most dramatic flame-out in the history of cryptocurrencies.

Just a few weeks earlier, Terraform Labs the creators of the TerraUSD and Luna cryptocurrencies, was riding high.

On 13 May, the blockchain had even been shut down by the validators – those responsible for verifying the transactions on the blockchain – though it would later resume block production with some functionality disabled.

A VC darling, backed by the likes of Pantera Capital and Kinetic Capital, Terraform Labs saw its first initial coin offering in 2019 but started to really take shape in January 2021 after a round of venture capital funding.

The founder of TerraForm Labs, Kwan Do-hyung (better known as Do Kwan) claimed he had created something unique, capable of weathering both bear and bull markets.

Investors – retail and institutional – agreed. Luna exploded from a market cap of US$2.5 billion in June 2021 to a peak of over US$40 billion in April this year.

Then, over the course of two days from May 9-11, it all fell apart.

To understand how this happened, you need to have a bit of an understanding of how stablecoins work, and how Terra/Luna worked in particular.

A stablecoin is a currency that is pegged to the value of an asset – most commonly the US dollar, but it could also be euros or gold.

Even though it’s traded on an exchange, a stablecoin should always be valued 1:1 with the underlying peg.

There’s a relatively complex taxonomy of types of stablecoins, but most broadly they can be broken down into two types: backed and algorithmic.

That means there is a central company that holds a reserve equal to the number of tokens in circulation. In theory, Tether holds $1 of real-world assets for every USDT.

The companies then guarantee that they will trade, 1:1 for the asset, so you can trade 1 UDST for 1 US dollar at any time.

So, let’s say that USDT slipped to US95c. An arbitrageur (or rather an automated bot owned by one) could and would then buy as many as they can, since they can immediately trade it in with Tether for $1. An instant, no-risk profit for the arbitrageur, and an increase in demand that will push the price back up to the peg.

Likewise, if the value of USDT went above the peg, say US$1.05, an arbitrageur bot could go to Tether and say, “here’s some amount of US dollars; please mint me an equal amount of new USDT.”

They would immediately sell this new USDT at a profit: that is, buy at $1 and sell at $1.05. The increase in supply would naturally drive the price back down.

Algorithmic stablecoins (sometimes called algos, not to be confused with the cryptocurrency Algorand), however, work a little differently.

They maintain a peg by using supply and demand manipulation managed by (as the name suggests) an algorithm.

Enter TerraUSD (UST), an algorithmic stablecoin with a unique mechanism for managing the price.

While TerraUSD was a stablecoin, it was inextricably linked with Luna (LUNA), a free-floating cryptocurrency, and the two worked in tandem to maintain the peg.

Luna, being a free-floating smart contract platform, is priced at whatever the market decides (US$120 at its peak; now US$0.0022), just like most cryptocurrencies.

The key to the Terra/Luna system was that UST was ‘backed’, in a sense, by LUNA. LUNA serves as a kind of counterweight to keep UST at its peg.

The way it worked was that if UST slipped below the peg, then the blockchain algorithm would mint new LUNA tokens, and use that LUNA to buy UST at its current exchange rate (sellers would be incentivised by arbitrage, much as in a backed coin, to make the trade).

The purchased UST would then be ‘burnt’ (ie. destroyed). That would drive up demand and reduce supply of UST to return the price to its peg.

Conversely, if UST went above the peg, it would mint new UST and use it to buy LUNA tokens. That LUNA would then be burnt. The increase in UST supply would drive the price down.

Terra/Luna had numerous critics, who noted that this entire system was built on sand, and the weird ouroboros of Terra and Luna could easily come crashing down.

But for a time the system worked, until suddenly it didn’t.

Luna, the free-floating currency, seemed like it could only go up.

During a bull market all currencies went up, so it would increase in value then.

During a bear market, investors tend to retreat to stablecoins (since they don’t go down in value), which meant more would buy UST. As noted above, when new UST is created, LUNA is burnt in equal measure, so in theory, the value of LUNA still goes up as supply is decreased.

Unfortunately for those investors, they didn’t reckon on the downturn in May when demand for both LUNA and UST declined sharply, creating an irreversible death spiral for both currencies.

This was compounded by a change in the policy of Anchor Protocol, a kind of savings account for UST that had offered 20% returns and was a prime incentive for people to hold UST. Up to 75% of users staked their UST in Anchor Protocol, according to Coindesk.

Anchor Protocol announced in March that this would become a variable rate, and people started running for the exits. One of the biggest was crypto lending business Celsius, which had half a billion US dollars in Anchor Protocol that it withdrew.

There was a big pullout of UST on May 9 (it’s not clear if this was co-ordinated or coincidental) causing the stablecoin to drop below its peg. In the space of just a few hours it dropped to US76c.

The problem was that nobody wanted to buy that newly minted LUNA. The market was in poor shape, and nobody was buying.

The algorithm had to start selling cheaply and printing more and more LUNA to make up to difference.

Of course, investors took note: they saw the de-peg, and they saw the sharp decline in the value of LUNA as new LUNA was being minted to try and restore the peg.

Confidence broke, and investors started pulling out their money as quickly as possible to try and salvage what they could, exacerbating the fall. The death spiral had begun.

As part of its custodianship of the Terra/Luna ecosystem, Terraform Labs had created the Luna Foundation Guard (LFG), headed by Do Kwon, that was designed to support the ecosystem and serve as a backstop in instances of a spiral.

Just weeks earlier the LFG had been boasting about buying large amount of Bitcoin to serve as a backstop to the UST peg. It said it had US$3.5 billion in Bitcoin reserves – one of the largest single holdings of Bitcoin in the world – that could be used to maintain the peg.

As Luna and Terra tumbled LFG said it had deployed the reserve (now valued at significantly less than it had been purchased for, since the value of Bitcoin had also declined due to the May market downturn).

Publicly, it was still bullish on restoring the peg. Just before the crash, Do Kwon posted this ill-fated tweet:

It turned out the LFG reserve barely made a difference.

UST, which had slipped right down to 43c, did make a brief comeback to 80c, before resuming its fall.

Meanwhile, the value of LUNA was in freefall. In its desperation to try and restore the peg of UST, the algorithm was minting new LUNA tokens at a rate that would make the Zimbabwean Central Bank blush.

Before the collapse, there were about 340 million LUNA Tokens.

By the time of the network shutdown, there were some 6.5 trillion LUNA tokens in existence.

The jig was up. Tens of thousands of investors were left high and dry; the main Terra subreddit unironically pinned suicide and support helplines to the top of the page before closing the subreddit entirely.

As of the time of writing, Terraform Labs has made public statements about rebuilding the network – perhaps including a rollback to an earlier block – but confidence in the network was gone.

In the days following the collapse, a lot of questions started being asked about stablecoins in general.

Although backed stablecoins are a fundamentally different beast than algorithmic stablecoins, concerns have been raised about their, well, stability.

In theory, a backed stablecoin cannot lose its peg for long – unless the company backing it shuts down or starts refusing to redeem tokens.

Tether, the largest stablecoin by a considerable margin, has had ongoing questions about its claimed reserves.

The company claims it has reserves to match the currently minted supply of USDT, stored in a variety of asset types (including ‘commercial paper’), but it has not been publicly audited.

For many observers this is a ticking time bomb – Tether has become fundamental to the cryptocurrency ecosystem.

It’s the most common trading pair, serving as the ‘middleman’ in many exchanges of crypto, and is used for remittances between exchanges.

A collapse of Tether, likely caused by a ‘bank run’ where Tether cannot redeem the currency, could destroy the entire ecosystem for years.

It’s unknown how likely this is to happen. There are also backstops: USDC and BUSB are both audited and have proven reserves.

Still, the lesson of Terra/Luna is that nothing in crypto is guaranteed.

Nathan Taylor is a massive geek and widely-published technology journalist who currently serves as the ACS Publications Manager.