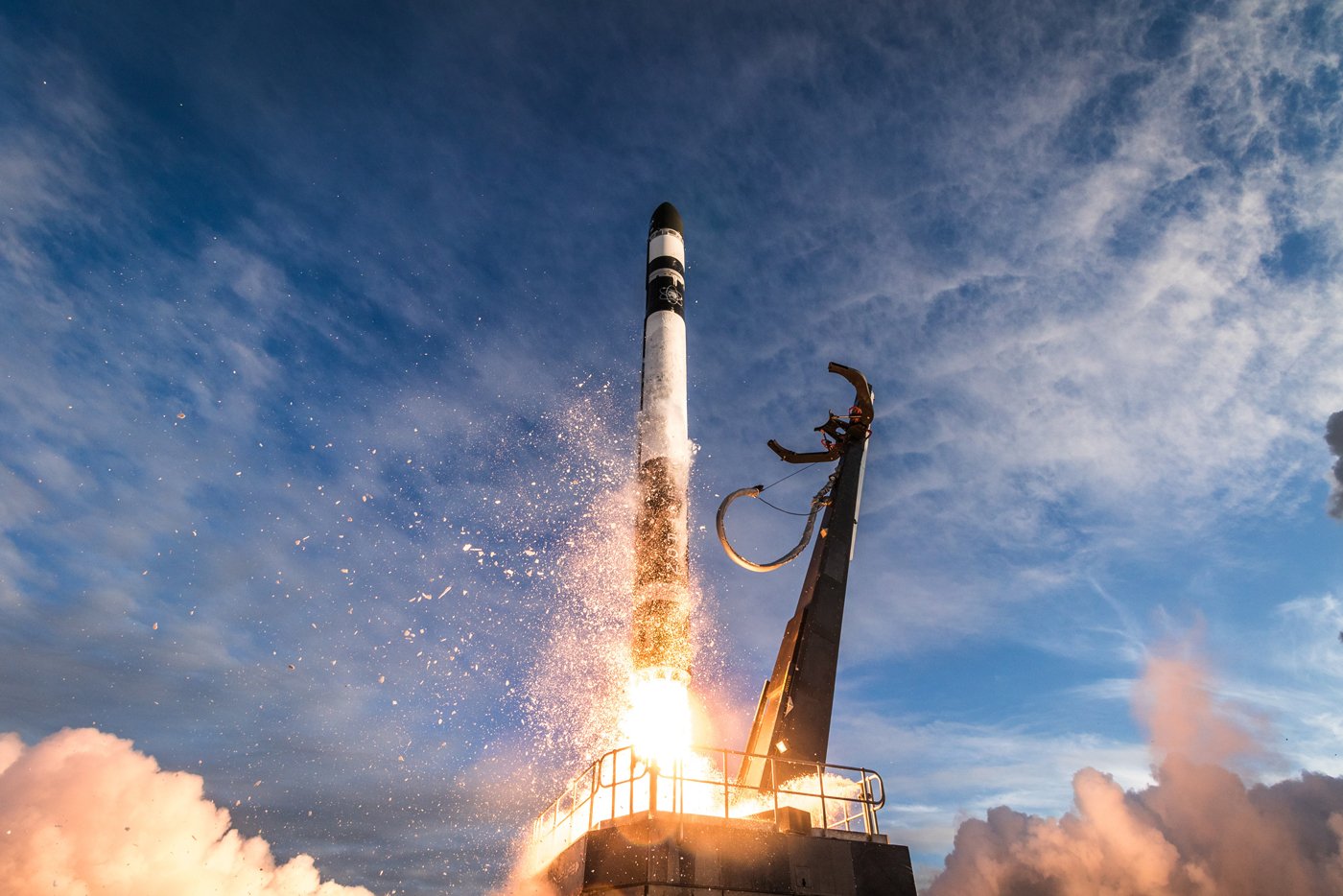 The local startup sector generated more than 4,500 jobs last year and where a global company is founded is crucial to employment, the StartupAUS Crossroads 2019 report into Australia’s startup ecosystem reveals.

The annual review of the startup ecosystem by peak  advocacy body StartupAUS found that among a new wave of startups worth $100 million, many are on their way to becoming unicorns (worth more than $1 billion) and that investment in those businesses is strong, with the average Series A almost doubling in size since 2015. But concerns remain over capital for early stage startups, with the seed dealflow dropping considerably in the last three years.

Australian venture capital firms raised more than $4 billion in new funds, with their value roughly doubling annually, with capital options expanded and grew more sophisticated to include venture debt, crowdfunding, foreign investment and access to public markets, angel and seed investment has fallen over three years, in both the number of deals and aggregate value of early-stage. 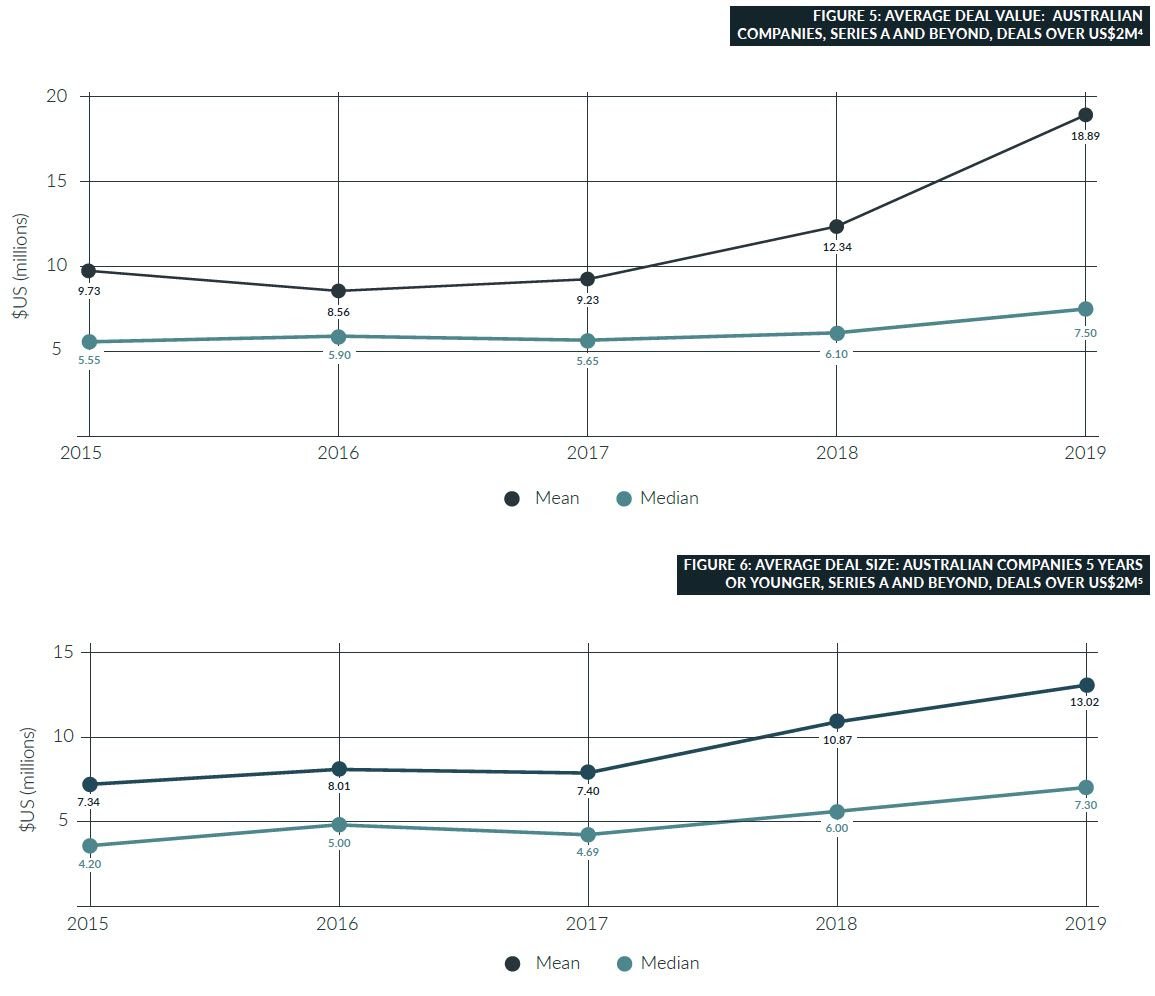 The early stage capital shortage is so severe that Andrea Gardiner, CEO of one early stage VC firm, Jelix Ventures calls it “the death zone” where startups fail primarily because of a lack of available investment.

Crossroads 2019 lead author Alex McCauley, CEO of StartupAus, said he was surprised by the size of the fall in early stage investment.

“The gradient of the decline is steeper than I thought,” he said.

McCauley is hoping Australian investors will shift their thinking a towards early stage startups, despite the current appeal of lower-risk, high growth on their way to unicorn status and beyond, concerned that the sector will growth in fits and starts, rather than steadily.

“The capital is there, it’s a matter of where it’s directed. In Australia, the competition from investors for early stage startups has yet to fully develop. In the US, founders are getting term sheets thrown at them while on stage pitching,” he said.

“This is understandable in a climate where lower-risk companies are still presenting very strong returns. But without capital and support for early-stage businesses we risk limiting our ability to produce more high quality scaleups,” he said.

A blessing of unicorns

The number of unicorns – private tech companies valued at more than US$1b+ (which excludes Nasdaq-listed Atlassian) – has grown from one in 2018 (Canva) to three in 2019: with Melbourne fintech Airwallex and Sydney neobank Judo Bank, joining the global design business

McCauley said this success demonstrates the importance of early stage investment to create an ecosystem that consistently produces new ventures, “rather than batches of great companies”. 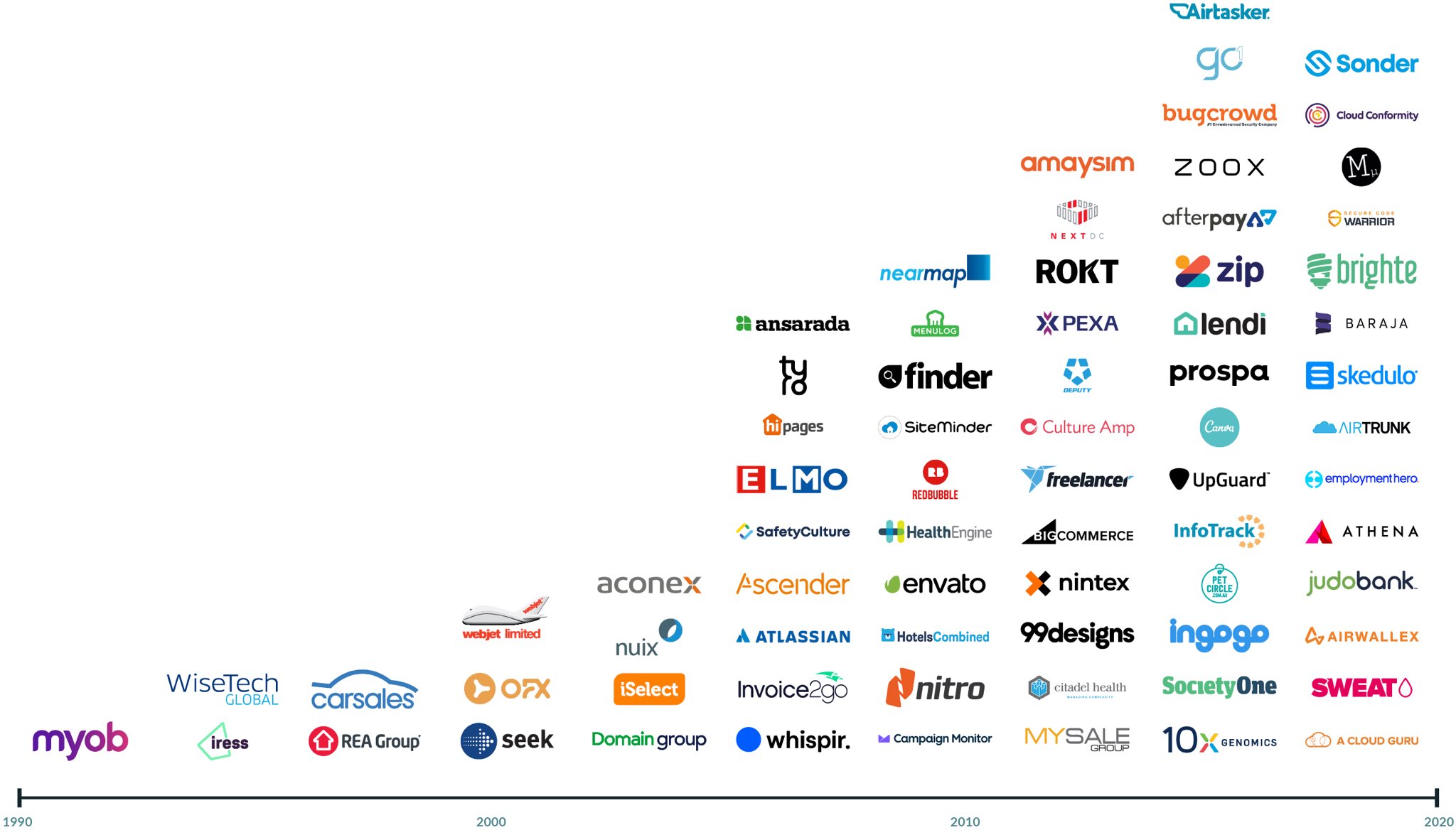 While successful tech founders have a global focus, Crossroads 2019 found that where a company begins its life has a dramatic impact on local employment, with many of the highly paid tech jobs remaining in the country of origin.

While servicing a large international market often means hiring teams on the ground around the world, the core of the business (designing and producing its tech products) tends to stays in the home country.

Spotify, the global streaming giant, has more than half its engineering team in Stockholm, and Atlassian has similar figures in Australia. Despite both companies having a primary focus on the US, their hometown dev teams are 30% larger than their US ones

Canva has 80% of its dev team in Australia, with Israel’s Waze and the UK’s Deliveroo operating at similar levels.

“Our research tells me tech teams are sticky – they stay where companies are born,” he said.

“That means the cities that gave birth to these companies will reap the rewards. And that’s a way a small market like Australia – Sweden is 10 million people – can compete globally for the best, highly paid jobs.”

While the focus on exports in Australia remains on mining and minerals, the Crossroads report shows the potential for tech companies to create high value jobs as well as exporting those ideas.

McCauley argues a shift in thinking needs to take place.

“For Australians to get their heads around the idea that small companies can quickly scale to become global giants is an important step to take. People need to realise that the  new jobs these companies are creating are the jobs their kids want, in interesting tech companies with high salaries.”

Crossroads 2019 concluded that funding for tech startups is a large-scale job creation driver.

In median terms, Australian startups create a new job for every US$300,000 (AU$440,000) of investment. When applied to the sector as a whole, which raised roughly US$1.4 billion (AU$2bn) in 2018, Crossroads estimate over 4,500 jobs were directly created by venture-backed startups in that year alone, without including the indirect employment created by the economic activity. 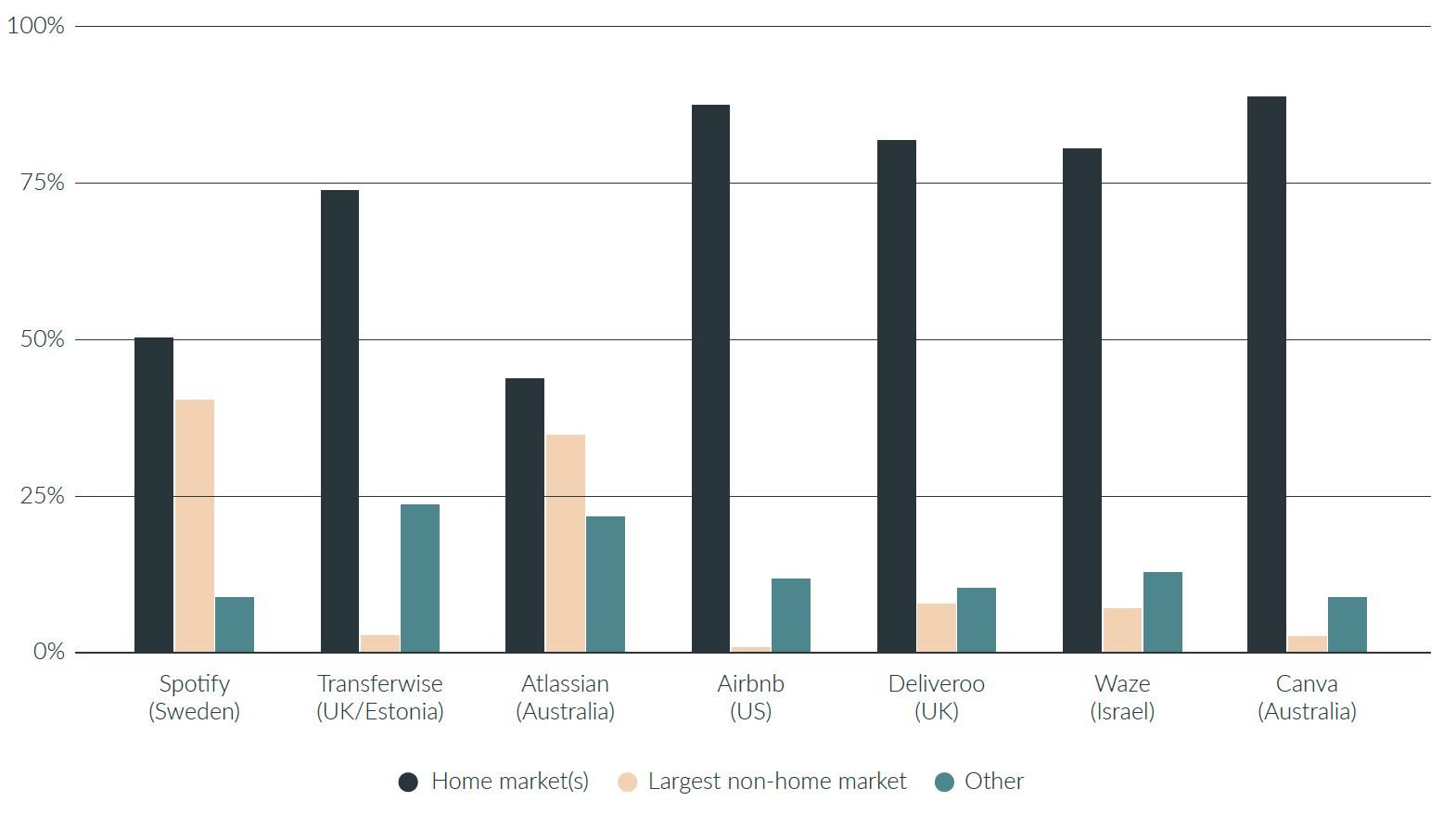 On top of concerns about seed capital, talent remains the leading constraint to startup growth, the report says, despite the addition of the Global Talent (Employer Sponsored) initiative, aimed specifically at helping startups get access to the best tech talent in the world. Other key challenges include the continuing decline in Research and Development expenditure, particularly in the form of the tightening R&DTI (Research and Development Tax Incentive), the risk of collateral damage to startups from the ACCC and government’s ongoing crackdown and regulation aimed at global firms such as Facebook and Google.

Federal government intervention in recent years to improve the importation of talent has yet to flow through effectively, including a new initiative allocating 5,000 permanent migration places per year to highly skilled tech experts (the GTI).

Investment in research and development presents a significant risk across the entire economy, Crossroads says, with Australia spending significantly less than the OECD average on R&D as a percentage of GDP.

“Both business expenditure on R&D and government expenditure on R&D has dropped consistently in Australia for a number of years. We are one of only a handful of OECD countries to see these numbers falling,” the report says, adding that the government’s tightening of the R&D Tax Incentive, went it comes to software R&D “could act as a jarring handbrake on the sector’s rapid growth”.

Crossroads 2019 points to “strong political headwinds”for the sector over the past year, pointing to two special pieces of legislation that “have noble goals, but both were passed in a flurry of activity prior to the election and both contain flaws that have hurt the reputation of Australian technology”.

They are TOLA (Assistance and Access Act), which increases law enforcement’s access to tech products, and  AVM (Abhorrent Violent Material Act), which was passed in the wake of the livestreamed Christchurch attacks and provides extremely harsh punishments for technology businesses that host violent material on their platform.

“Now governments across the globe are faced with thorny regulatory questions on how to address concerns of the populace at large about the role of technology in society,” the report says.

“Australia has chosen to place itself at the leading edge of policy in this regard, with a number of high profile pieces of legislation aimed at curtailing the activities and a widespread ACCC review of the power of technology platforms. There is a real risk that the resulting policy outcomes catch local businesses in the crossfire, causing significant disproportionate harm to Australian startups.”

The Crossroads 2019 report made 10 recommendations for government to improve the productivity and success of the startup sector as a contributor to GDP. They are:

You can download and read the full StartupAus Crossroads 2019 report here.