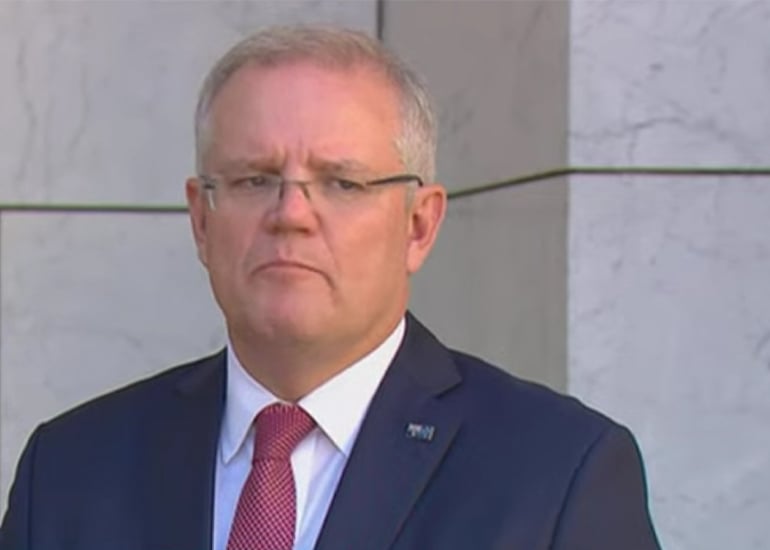 Prime minister Scott  Morrison has assured Australians while we can’t stop the virus, “we can defeat it by slowing it down”.

Consequently, the PM emphasised the role social distancing has to play in the response to the spread of COVID-19. Before announcing the government has upped the ante on the amount of distance we must now keep between us in order to help flatten the curve.

“We will be moving to arrangement for non-essential s gathering of less than 100 to now have 4-square-metres between people. If you have a 100 square metres, you can have 25 people in the room,” the PM said. “We need to ensure we are limiting the contact [between people] and the spread of the virus.”

Morrison described the rules as practical and easy to apply.

“It simply means understanding how big the room is and how many people can be in that room at that time.

The PM also urged people to consider their behaviour.

The PM admitted the new rules would bring challenges for certain industries.

“It means a lot of change for cafes, restaurants and clubs,” he said.

Morrison also wanted to stress the vital role self-isolation has in stemming the spread of the virus. He expressed dismay at hearing reports of people saying they are in self-isolation and they are out and about.

“That is why we are taking and announcing these measures.”

Murphy said a large majority of cases were still imported and as such self-isolation is vitally important in the coming days.

“Lots of Australians are coming home and with that is a high risk of importing the virus into the country. So this issue of quarantining as you come home is serious. This is not an advisory. this is serious – no exceptions.”

The CMO said with a progressive number of community outbreaks surfacing in several states people need to understand how social distancing could lessen the spread of the virus.

“We have to make sure people are clear what we mean by social distancing. You should be distancing yourself from every fellow Australian. Keep that metre and half away from each other and stay away from work or the community if you are unwell.”

Murphy says the days of soldiering on through illness should be long gone.

“We can’t do that any more.Nobody should be going to work or mixing with society if they are unwell. Only go out when you are well.”

Murphy also urged everyone to “practice good hand hygiene”, saying this was critical.

“We have had very few deaths or cases in intensive care but there is a risk if we don’t all do our civic duty to control this spread, it will grow significantly greater.”

The PM said the national cabinet would be meeting again to discuss travel before the school holidays. He also confirmed in relations to schools and preschools “the situation has remained unchanged”.

“It is in the national interest to keep the schools open,” the PM said.

He also congratulated the schools, teachers and principals for their commitment to keeping the education system up and running.

When queried as to how wise it was to keep schools open given a recent case of transmission between a teacher and student, the PM deferred to the CMO.

“I think it is really important to recognise that we think the risk to children is very low,” said Murphy. “Our view at the moment, our long-haul strategy is to keep schools open and the risk is proportionate.”

The PM also welcomed the decision that was made by the banks today to offer relief to the nation’s small businesses by deferring loan payments.

“These are important decisions that will provide genuine and real relief.”

The PM said it was important everyone work together to get Australia through the next six months.

“We will also work to see how relief can be applied to relief for tenants in commercial and residential premises.”

The PM said work was being done to consider what the model might be and what rules would trigger a hardship case.

“All Australians are going to be making sacrifices in the months ahead – that will include landlords for people who are enduring real hardship.

The PM also announced the government would no longer be handing down a budget in May, but rather move the budget to October 6, 2020.

The PM also announced under the biosecurity act the government would be restricting travel into remote indigenous communities to limit the spread of coronavirus.

There will be a number of exceptions that will apply for purposes of medical supply or medical emergencies or critical services.

The aged care sector also received a substantial funding boost with $444.6million going to support aged care facilities – 234.9 million to support residential care and support staff and 92.2 million to provide additional support to home care providers including for services like meals on wheels.

As for what’s next, the PM said the government is considering further decisions on travel and further advice on managing critical hospital resources and further restrictions may come.

“There will be as we have already seen parts of cities or places that will be more susceptible because of localised outbreaks and we have asked what will trigger actions and what needs to be done to shut that down. Where there are more specific outbreaks we need a clear set of rules.”