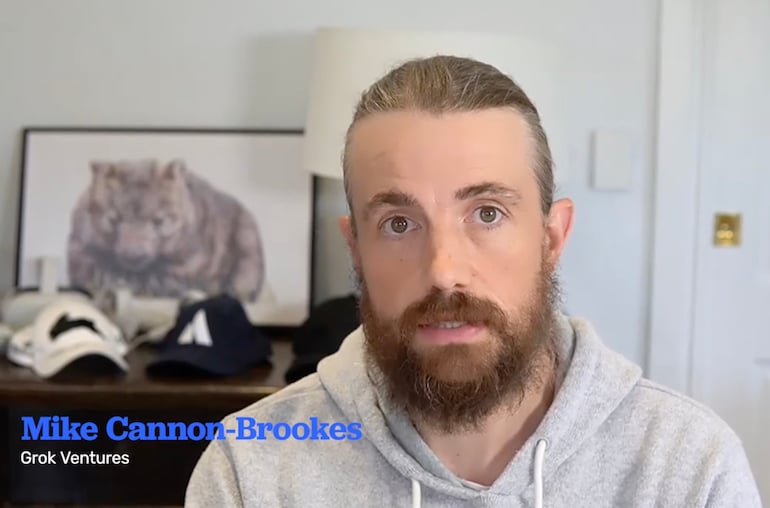 Mike Cannon-Brookes during his campaign against the AGL demerger

AGL’s board announced it was dumping its demerger proposal this morning. Heads have rolled too. Chief executive Graeme Hunt, chairman Peter Botten and non-executive director Jacqueline Hey have resigned. Another director, Diane Smith-Gander, will go in August.

But it remains to be seen if Cannon-Brookes and his allies can achieve their ultimate goal – to force AGL, Australia’s biggest carbon emitter, to accelerate the closure of its coal and gas-fired power stations.

The plan to split AGL was due to go to a shareholders vote in mid-June, at which it required 75% support.

Earlier this year, Cannon Brookes – Australia’s third-richest person – led two unsuccessful takeover bids for AGL, with the goal of taking the company private and retiring its fossil fuel generators. He has campaigned hard against the demerger on the basis it would hinder his plan for AGL to lead Australia’s energy transition to renewables.

He strengthened his hand by spending, through his investment company Grok Ventures, about A$650 million to acquire a 11.3% stake in AGL – almost half the shares needed to thwart the demerger vote. This has made him AGL’s single biggest shareholder.

Only 10 days ago, then chief executive Graeme Hunt called Cannon-Brookes’ opposition to the demerger “out-of-touch, undeliverable and irresponsible nonsense”.

But late last week, Cannon Brookes gained a symbolically significant ally in HESTA, the superannuation fund for health and community service workers. It announced it would vote against the demerger “because it will not adequately support economy-wide decarbonisation”. It said a “proactive and orderly transition to net zero emissions” was “in the best financial interests of our members”.

HESTA holds just 0.36% of AGL shares, but its siding with Cannon-Brookes was a sign AGL’s board was losing the war of words over what was best for shareholders.

AGL’s board confirmed that this morning when it withdrew the demerger proposal.

Why did AGL’s board want to demerge?

The board’s proposal to split (or demerge) AGL into two entities was to increase returns to shareholders.

“AGL Australia” would focus on energy distribution and trading. “Accel Energy” would own AGL’s existing half-dozen fossil-fuel generators – such as the Bayswater black coal-fired plant in NSW, the Loy Yang brown coal-fired station in Victoria and the Torrens Island gas-powered station in South Australia – as well as its wind, solar and hydroelectric assets.

The board argued this was good for shareholders in three key ways.

First, it would create two “pure-play” companies – focusing on only one line of business – which would be more attractive to investors wanting specific assets (such as energy distribution) but not others (such as coal generators). This could lead to a takeover bid offering more money than what Cannon-Brookes and his partners offered.

Second, each company would have focused managements, empowered to pursue strategies and opportunities “based on their unique assets and capabilities”.

Third, shareholders would have the choice to divest from fossil fuels while still keeping their investment in distribution.

The AGL board also argued the demerger could accelerate “decarbonisation beyond what could be achieved” under the existing structure.

This appeared to be based on the new AGL Australia being partly freed from the old AGL’s legacy fossil-fuel generation, and Accel Energy having more focus and better access to capital as a pure-play company.

Why oppose the demerger?

First, splitting and duplicating management structures would cost at least A$260 million, and $35 million a year thereafter.

Second, the two new companies would have more volatile cash flows and be less able to withstand financial shocks. Accel especially would be at “high insolvency risk” due to having so many assets in coal-fired generation.

Third, and most importantly, the demerger would eliminate the benefits of AGL being a vertically integrated electricity generator and distributor. “We believe that retaining vertical integration strategically positions AGL to lead Australia’s energy transition,” Grok Ventures argued.

What now for AGL?

AGL is now in for a tumultuous period. It’s unclear who will replace Hunt as chief executive or Botten as chair.

Cannon-Brookes has reportedly demanded two board seats. But shareholders cannot merely demand and receive board seats, even if they are the largest or loudest. The board must act for all shareholders – the majority of which may well have supported the demerger.

By law, the board’s primary obligation is to the corporation’s best interests – which means maximising returns to shareholders.

On that basis it had solid ground on which to propose the demerger. Research shows that, on average, demergers, spin-offs and divestitures do benefit shareholders, while mergers and acquisitions tend to destroy shareholder value.

The board cannot adhere to what a minority of shareholders want – no matter how worthy their cause. It should generally not pursue social or policy goals unless they also maximise shareholder wealth.

On the other side of the ledger, the market has turned against fossil fuels. There is declining long-term shareholder value in coal-fired power stations. Banks are reportedly reluctant to lend to AGL given its ownership of coal and gas generators. However, it would seem logical for them to be willing to finance renewable energy investments.

AGL could potentially become a takeover target, though the question is at what price. On Monday, its share price dipped as low as $8.52 – but that’s still more than the $8.25 the Cannon-Brookes-led consortium offered in March. It’s possible, though, that they might revive that bid.

Aside from Cannon-Brookes being positioned to play a larger role, the future is uncertain. AGL has announced another strategic review. But it is not clear what, if anything, this will achieve – given its previous strategic review led to the now scrapped demerger.

Mark is an Associate Professor of Finance at UNSW Business School. His research interests are mainly in corporate governance and in law & finance. His work has appeared in major finance journals such as Journal of Financial Economics, Review of Financial Studies, and Journal of Financial and Quantitative Analysis. He received his PhD in finance from UNSW in 2012 and has also received qualifications in law.