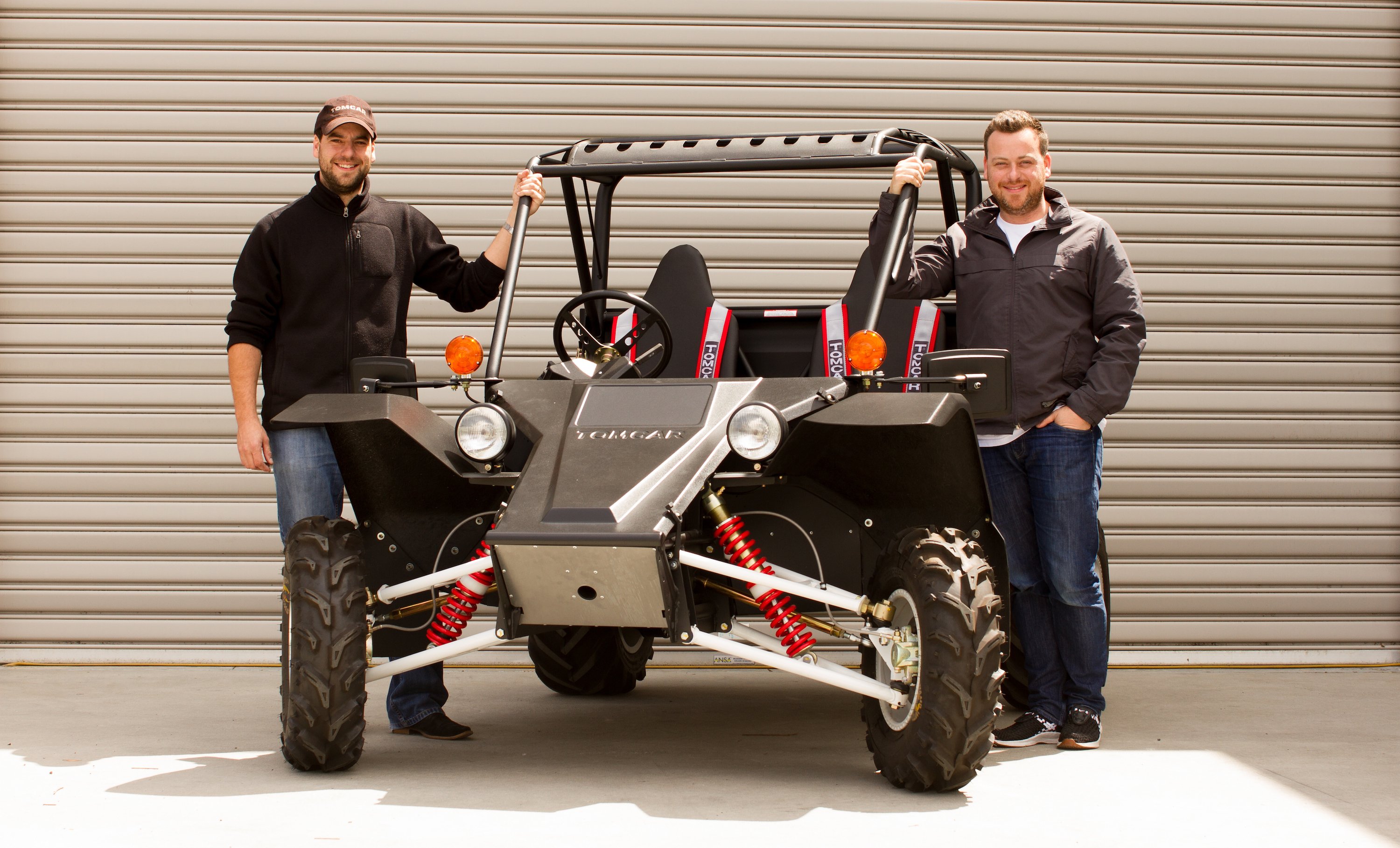 Melbourne-based car manufacturing startup Tomcar Australia is well on its road to success, having pre-sold 100 units of the all-terrain vehicles and now accepting cryptographic currency Bitcoin.

So how did the idea come about? The story begins in 2005, when the Brim family packed their bags and migrated to Australia from London. Having entered retirement, Co-Founder of Tomcar Australia, Joe Brim, started navigating the web for a side project when he stumbled across the first iteration of the Tomcar designed by Israeli military. In realising the vehicle’s commercial potential, Joe contacted the Israeli defence force and purchased the rights to modify, manufacture and distribute a local version of the vehicle in Australia.

Joe and his sons David and Michael Brim spent five years redesigning the vehicle so it could be used by the defence, agribusiness, mining, emergency services and recreational sports markets. The main goal for them was to create the “world’s best performing and safest all-terrain vehicles”.

As such, the Tomcar maintains the size of the original Israeli military vehicle, but with a very low central gravity, allowing the vehicle to tip on a 45-degree angle without rolling over. After finalising the design and completing thousands of pages of paperwork, they outsourced the manufacturing to Melbourne-based tier one automotive components supplier, MTM.

“We searched for car component manufacturers around Australia who supply Holden and Ford and we chose to partner with MTM because they have the right facilities, factories, and personnel and on top of that, they have extensive experience in building high quality automotive products. It was the perfect fit,” says David, Co-Founder and CEO of Tomcar Australia.

Currently, 60 percent of the components are supplied locally, and 40 percent are bought from overseas suppliers. David stresses that the cars are 100 percent fabricated and manufactured in Australia, and that they would like to source more components from local suppliers, with the goal of 80 percent.

The Brim family self-funded the business, forking out $10 million from their own hip pockets, with the help of close friends who’ll take 15 percent of the profits. While $10 million may appear excessive for a startup, David feels it is “quite a good price to start a car company, especially when considering that the government provided Holden with $275 million last year”.

“We’re lucky that we’ve been able to come this far without having to raise capital from external investors. We always wanted to keep it as a family business. We don’t want to sell out too early,” says David.

The company is also reinventing the way cars are sold in Australia. They’re selling Tomcars directly to customers online rather than relying on legacy dealer networks.

“We don’t want to rely on dealers with millions of dollars worth of cars on the corners of the road. We’d rather sell via a distribution system that’s in line with wider internet retail trends,” says David.

“We’ve got a very robust website with plenty of information, videos and links. We’re basically trying to create an ecosystem where people can get all the information they need online, rather than having to visit dealers.”

But what about those who want to ‘try before they buy’? David says “it’s surprising” that they’ve been able to pre-sell 100 units to people who’ve never seen the car in flesh.

“We’ve noticed that people have a specific need for the Tomcar. There’s no other vehicle that will allow them to comfortably and safely drive across rough or steep terrain. Other people are from rural areas, so they’re not used to seeing products prior to purchase,” he ads.

He acknowledges, however, that most people want to see the car first, so they’re appointing Tomcar representatives across Australia “who will act as points of demo reference” for people who want to experience the car first-hand before purchasing it.

“The great thing about Tomcar is that it’s a really cool product. People are very excited about it. So we’re doing a lot of road trips to get as many people in the car as possible. Once they’ve experienced the product, they tend to log onto their social media accounts to spread the word,” says David.

David says he’s a strong supporter of the Bitcoin economy, as it allows overseas transactions with less fees and exchange rate fluctuations. Tomcar Australia has been using cryptocurrency to pay overseas suppliers for quite some time, and felt it was only logical to accept the same method of payment from their customers.

“To be a truly innovative auto manufacturer, it needs to be about more than what you make. It needs to transfer through the entire company system, your supply chain, distribution, and now even payment systems such as Bitcoin,” he says.

“Our manufacturing partner, MTM who do a lot of resourcing for us are also exploring using Bitcoin to pay suppliers in China and Mexico. For international trade, I think it’s a wonderful idea.”

Transactions made in Bitcoins still include GST. The bitcoin exchange is calculated in real-time and reconciled by CoinJar so Tomcar Australia gets the exact amount it charges.

Reflecting on the negative publicity around Bitcoin over the past few months, David says “the uninformed believe that Bitcoin is a risky form of currency. Fraud isn’t specific to cryptocurrency, it’s all around us.”

“People forget that currency is always in a state of flux. There are always a variety of currencies being used in any economy. Some of these currencies stay longer than others and some evaporates and new ones will rise. And cryptocurrency is the new era of currency; it’s on its way to becoming mainstream so it makes sense to use it.”

“The Bitcoin economy is here. It’s becoming an increasingly mainstream currency, with companies such as WordPress and Chinese internet giant Baidu accepting it. Australia is one of the largest markets for Bitcoin users outside the US, and it makes excellent sense to respond to that growing demand,” he adds.

David says their biggest challenge throughout this eight-year journey has been getting the cars into production.

“It was very difficult to find a strategic partner to build the cars for us. Initially, we wanted to build it ourselves but we had no in-house expertise,” he says.

“But once we started manufacturing in late 2011, it felt like coming out of one relationship and moving into another. We had to refocus ourselves and concentrate on brand awareness.”

That’s the other challenge, raising awareness when you’re offering a unique product.

“When you’re creating a product that doesn’t exist in people’s minds – whatever the product may be, whatever industry you’re in – and you’re disrupting the landscape, it’s very hard to make that entry. We’re basically the new kids on the block,” says David.

And unsurprisingly, the company’s biggest success is their product.

“We’ve built the most incredible car, and nobody thought we could do it at first,” says David.

He adds that the media have it wrong when then say “it’s all doom and gloom for the car industry in Australia.”

“It’s actually an exciting time to launch new car brands in Australia. Australian manufacturers and engineers are some of the best in the world, we just don’t hear about them in the press. I think the best way forward is for Australia to concentrate on niche manufacturing.”

Interestingly, Tomcar has been able to employ the lean startup principle.

“Manufacturers still control most businesses, and people think that only tech companies can have less than 10 employees. That’s not the case,” says David.

“Tomcar Australia has proven that it’s about attitude. Any industry can follow the lean approach. We’ve taken the tech startup approach and applied to the automotive sector.”

He stresses, however, that they “don’t rest on their laurels”.

“We don’t take anything for granted. We’ll keep putting the same amount of effort into what we’re doing in the future as we did when we started out.”

They also don’t focus on what competitors are doing as they don’t want to be distracted from their personal goals.

“We try not to get too involved in the automotive industry. It’s irrelevant anyway. We really have this amazing product and we just need to focus on generating brand awareness,” says David.

Tomcar Australia will be launching the four-seater version of the vehicle mid-next-year, as well as a racing Tomcar in a year’s time.

“You’ll be able to buy a racing Tomcar, valued at $30,000, $5,000 more than the current offering. The Confederation of Australian Motor Sport will hopefully approve it in the near future, so we can offer the first pre-approved all-terrain vehicle that people can race,” says David.

The Tomcar costs $25,000 and the company aims to sell 5,000 units every year in Australia before entering into international markets.