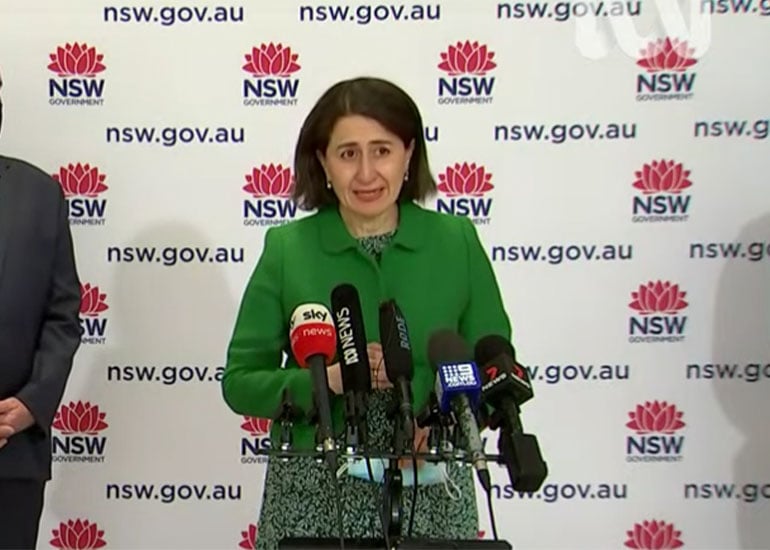 Sydney residents must stay within 5km of their home and fines for breaches of NSW Covid rules will increase to up to $5000, with police enforcement increased, as daily infection numbers continue to hit fresh records.

NSW will up its police presence with 14,000 officers across the state now on ‘Covid duty’ to check citizens are complying with new restrictions and guidelines, along with 500 additional Australian Defence Force personnel.

The changes come as the state recorded 466 new locally acquire cases to 8pm Friday, with 87 infectious while in the community. Four more people have died.

From midnight this Sunday, August 15, outdoor recreation will be banned for residents in the local government areas (LGAs) of concern.

They will only be allowed outside their homes for exercise and supervision of children.

Police minister David Elliott said the current public health orders were tightened because  they were being exploited .

“In the LGAs of concern it will no longer be acceptable to leave your home for outdoor recreation, meaning gathering at parks or outside takeaway shops or cafes is not on. Enough is enough. If you do it, you will get fined,” he said.

“Residents across Greater Sydney and lockdown areas can also expect to see enhanced random police checkpoints on roads, to ensure people are complying with the stay at home rules aimed to protect the community.”

From today citizens of Greater Sydney will now be limited to travel only 5km from their home to shop or exercise.

The rule applies to the Greater Sydney region including Central Coast, Blue Mountains, Wollongong and Shoalhaven.

From midnight Sunday, police will enact ‘Operation Stay at Home’ to further restrict movement across NSW.

Police Commissioner Mick Fuller said police will be cracking down on those people doing the wrong thing and excuses would no longer be acceptable.

There will now be a number of penalties to ensure people comply including a $3000 on the post fine for anyone breaching the two-person exercise rules.

“These are some of the strongest powers we’ve ever had in the history of the NSW Police Force, as part of the government’s strategy to get in front of the virus in the coming weeks – it’s all about getting ahead of Delta, not chasing it,” Fuller said.

“From this week we’ll be issuing $5,000 fines to people and closing premises which continue to break the health orders. Don’t complain if this happens to you – police are over the rule breakers.”

Premier Gladys Berejiklian said a handful of people who are wilfully breaking the rules and putting the rest of the community at risk.

“The increased fines and heightened police presence are about ensuring people who are doing the wrong thing are caught and punished appropriately,” she said.

Police will have increased powers to deliver on-the-spot fines and army and police presence will increase, with the Premier saying at Saturday’s daily briefing that “this is the most concerning day” of the outbreak.

From Monday, August 16, the fines for the breaches of public health orders will jump:

The new fines are:

Further to this, in effect from next Saturday, August 21, people from Greater Sydney will need a permit to go into regional areas.

However, police will commence monitoring the roads this weekend to ensure people are only travelling to regional areas for permitted reasons.

On the spot fines of $5000 will now be handed down from tomorrow – lying on a permit will also cop the same penalty.

The permit will be available on the Service NSW website.

If you want to travel to your second home, you are now only allowed to go there if are using the home for work accommodation or if it requires urgent maintenance and repairs and only one person may travel there.

If you are single and want to create a single bubble – you must now register your single bubble buddy, who must live within 5km of you. The change starts from Saturday, August 21. Registration will be available on nsw.gov.au.

NSW Police commissioner Mick Fuller also warned anyone considering attending a protest in the coming week to rethink their actions.

“There is a potential worldwide protest coming up and I would say to anyone again who thinks about turning up – that if you thought the police response was big weeks ago, it will be much bigger this time,” he said.

The Premier seemed to hint that the lockdown, currently due to end on August 28, could continue through September – three months in total.

“I think for some time we thought Australia was different to the rest of the world, but it’s not,” Berejiklian. said.

“It is very important for us to acknowledge and accept that vaccination is key – this is literally a war.”

Workers aged 17 and over who live in the LGAs of concern, who have symptoms of COVID-19, get tested and isolate until a negative result is returned, will be eligible for one $320 payment in a four week period for lost wages.

The ‘COVID-19 Test and Isolate Support Payments’ start next week and will help cover lost wages of casual workers, as well as employees who may have exhausted their sick leave or carer’s leave to isolate at home.

Those waiting on their test results will get the $320 payment in their bank account within 3 business days of applying online at Service NSW.

There will also be a new $400 hardship payment payable through the Red Cross, for temporary visa holders and others in the community who are ineligible for Government financial support.

Information on eligibility and how to apply is online at nsw.gov.au/covid-19

NOW READ: NSW plunged into a 7-day statewide lockdown as the government scrambles to respond to a growing Covid threat