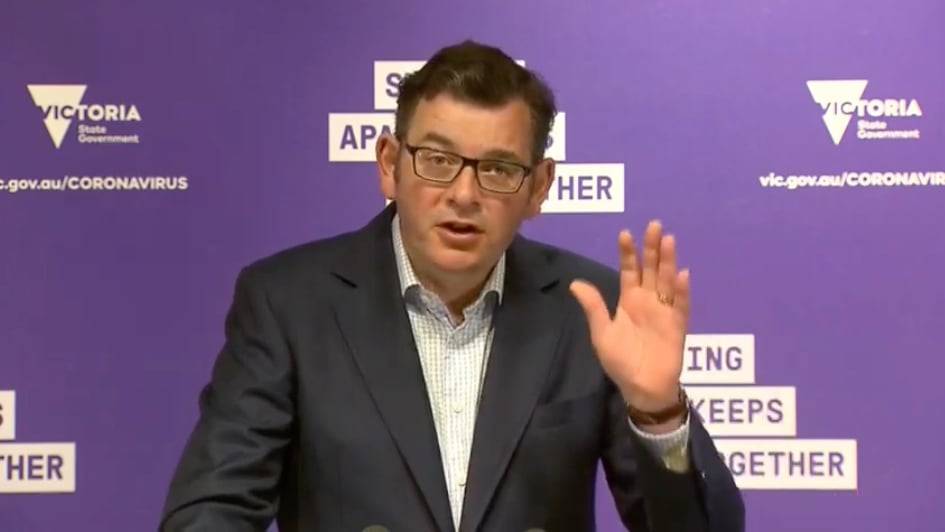 Expectations that Victoria would begin to ease lockdown restrictions in Melbourne earlier than the planned have been put on hold by Premier Daniel Andrews as the state deals with a minor Covid-19 outbreak in the city’s Northern metro area.

Andrews labelled it a “cautious pause”, but offered some hope that an announcement on easing could be made on Tuesday.

“I know plenty of people were looking forward to some good news today. And soon, very soon, we’ll have some,” he said.

“I do hope to make definitive announcements about opening up metropolitan Melbourne and a couple of days’ time.”

Andrews said the city was still on track to reopen on November 1, but it may happen earlier based on testing being conducted in the city’s north today.

Victorian Chief Health Officer, Professor Brett Sutton pleaded for another 24 to 48 hours for results, but the palpable sense of frustration in Victorians was perhaps best summed up by former health minister Jenny Mikakos, who tweeted that Sunday’s announcement was “paralysis in decision-making”.

Andrews said he would not respond to her comments.

Vic has met the under 5 threshold which some thought was unachievable. This was a very cautious target. 6/7 of new cases are related to a known outbreak so the risk is manageable. The set reopening is gradual & safe so any delay is unnecessary. It’s paralysis in decision-making.

Melbourne’s Lord Mayor, Sally Capp, accused the government of “changing the goal posts”, saying she was “bitterly disappointed” that the announcement provided no certainly for businesses.

Changing the goal posts is confidence shattering for businesses that are struggling to hold on.

Every day is critical to keeping Melburnians in jobs and saving businesses.

There are 100 active coronavirus cases in Victoria, with seven new cases in the last 24 hours. Six of the new cases are linked to the Northern metropolitan outbreak, which now involves 39 cases across 11 households – it was six on Tuesday – while the other one is a healthcare worker.

“Concerningly, while these cases have locations in common it is not yet clear how they link together. It means we may still have transmission happening where we can’t see it,” Andrews said.

The rolling fortnightly average of cases to Saturday was 4.6 in metropolitan Melbourne and 0.2 in regional Victoria, but there are nine mystery cases in that period.

Victoria’s roadmap set under 5 new daily cases as its threshold.

While NSW had seven new cases on Saturday, they all from people in hotel quarantine after returning from overseas. There were no locally acquired cases.

For a third consecutive day, NSW has reported no new cases of locally transmitted #COVID19 in the 24 hours to 8pm last night. Of the seven new cases all were acquired overseas and are now in hotel quarantine. pic.twitter.com/zPfETq04xo

“This is the strategy, it is working, but it is appropriate just to be doubly sure that there is not more virus out there in the northern suburbs then we think.”

The good news for regional Victoria is that further easing of restrictions from midnight on Tuesday.

As part of the Third Step from October 28, indoor gyms and fitness spaces can open for up to 20 people, with a maximum of 10 per space and a density of one person per 8 square metres.

Indoor pools will open to 20. Indoor sport will begin for those 18 and under. Food courts can open. Live music can resume as part of outdoor hospitality.

School graduations can be held within school communities.

For religious celebrations, 20 people can gather together indoors with their faith leader – or 50 outdoors.

From midnight tonight, October 25 Greater Shepparton will also come into alignment with the rest of regional Victoria and then progress under those changes.

Andrews held out hope that just as he’d already flagged that any changes to reopen Melbourne would have come into effect from October 28, there was still hope it could occur based on the outcomes of the northern metro outbreak once more is known about its connections.

Chief Health Officer, Prof. Sutton said they were still on track for the previously outlined November 1 reopening for Melbourne.

Previous article Ignition Lane’s Weekly Wrap: MyDeal and Adore hit the ASX, the Future Fund takes a hit on Quibi
Next article Queensland biotech Microbio has developed a rapid Covid-19 test that can also tell if you are infectious
Via Business
Tags COVID-19lockdown lawsMelbournenewsVictoria