Australia’s startup ecosystem is falling behind the global pack

Industry lobby group StartupAUS has described the latest analysis of Australia’s startup ecosystem as “disappointing” after Sydney slipped six places to 23rd globally, despite rapid growth in Melbourne where the ecosystem increased in value by 40% in 12 months according to the annual Startup Genome Global Startup Ecosystem Report (GSER).

The report is based on data from more than 1 million companies across 150 cities.

While the Melbourne early stage ecosystem is now worth US$2.24 billion, up from US$1.6bn in 2018 report, it remains outside the top 30, but was singled out as one of the “next 30” fastest growing ecosystems with the potential to crack the top 30.

Melbourne was ranked in the top 20 for connectedness and top 25 for talent.

“This result is disappointing, but it’s not a surprise. In 2015, Australia’s leading ecosystem was 16th in the world. That slipped to 17th in 2017. Now, after some years in the political wilderness, the rest of the world is overtaking us,” he said.

“Reports like this remind us that local growth is great, but this is a global race with very real prize money and lots of competitors. We need consistent, long-term support to ensure we’re a genuine contender.” 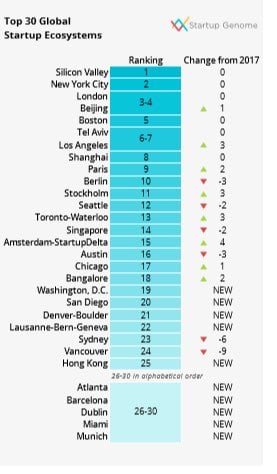 McCauley points to the fact that the sector has largely been ignored in promises made during the federal election campaign leading up to the May 18 ballot.

“This is not a niche issue about hipsters in cafes playing with their laptops. This is about ensuring that Australia is a country where good ideas can flourish into global companies. If we don’t have that right, we will not prosper in the 21st century. It’s as simple as that,” he said.

The good news is both Sydney and Melbourne had growth, yet Australia overall lagged in global trends and thus fell in the international rankings.

“Despite the falling rankings, having any city’s ecosystem inside the top 30 is an achievement. Only 16 nations in the world can claim that. And Melbourne was specifically listed as a high growth ‘Challenger’ to the top 30,” McCauley said.

Investments in startup infrastructure and other improvements, including a huge influx of funds into venture capital firms, were not taken into account in these numbers, but are likely to have an impact further down the track.

On top of those trends, the recent creation of new unicorns such as PEXA and Airwallex was not taken into account because the GSER focuses on early stage startups in its valuations.

He also points to the creation of startup precincts such as the Sydney Startup Hub or The Precinct in Brisbane as laying the groundwork.

“We would expect these positive fundamentals to start to deliver performance boosts in the medium term,” he said.

“It’s entirely within our power to turn this thing around. There’s no reason why Australian ecosystems shouldn’t be rapidly climbing these rankings. We just need to be consistent in our approach.”

The GSER 2019 report concluded that deep tech is where founders and investors see the greatest growth opportunities.

“Nearly a decade ago, roughly 20% of global startup creation was in Deep Tech sub-sectors. This includes areas such as Advanced Manufacturing & Robotics (AMR), Cleantech, Life Sciences, and more. Today, nearly half of global startup creation is in Deep Tech. The four fastest-growing sub-sectors globally, in terms of early-stage funding deals, are Deep Tech-related, led by AMR,” the report says.

And while the global startup economy creates plenty of wealth, there’s work to be done on sharing it, they say.

“The size of the global startup economy rose 20% in one year to reach $2.8 trillion. This is larger than the size of many advanced economies. Yet we continue to see uneven geographic distribution of that wealth, with two-thirds of global exit value concentrated in the 10 largest ecosystems,” it says.

“Additionally, only 17% of founders worldwide in our data are female. Some ecosystems are well above average, but there is clearly room for greater demographic participation in the global startup economy.”

Melbourne is one ecosystem bucking the diversity trend. One-third of Melbourne’s founders are women and one in three founders are born overseas, while 2% of founders are indigenous.

Edtech is the fastest growing sub-sector in Melbourne, with more than 10% of startups targeting the education sector.

Life Sciences (healthtech) was another strong sub-sector, thanks in part to the BioMelbourne Network and the national Biomedical Translation Fund.

LaunchVic CEO Dr Kate Cornick said the Melbourne scene was flourishing through the convergence of ICT talent, growth in the number of startups, a commitment to inclusion, and being one of the world’s most liveable cities.

Startup Genome believes Melbourne can grow to US$4bn in value the next few years Cornick says the latest growth figures show they’re on track to achieve that goal.

“Melbourne is the fifth-fastest growing ecosystem and has the potential to pip some of the top 30 ecosystems in the next few years,” she said.

Diversity was a key focus when Dr Cornick joined the government-owned organisation two years ago.

“It’s something we should collectively be very proud of, but there’s a lot more work to do.”

Dr Cornick sees the rise of Victoria as a national issue, rather than a Sydney-Melbourne rivalry.

“We believe that whatever we do in Victoria is helping rise the tide for Australia,” she said.

“Sydney’s place has fallen and we don’t see that as a good thing for the country.”

Here’s how the GSER saw the Melbourne ecosystem: 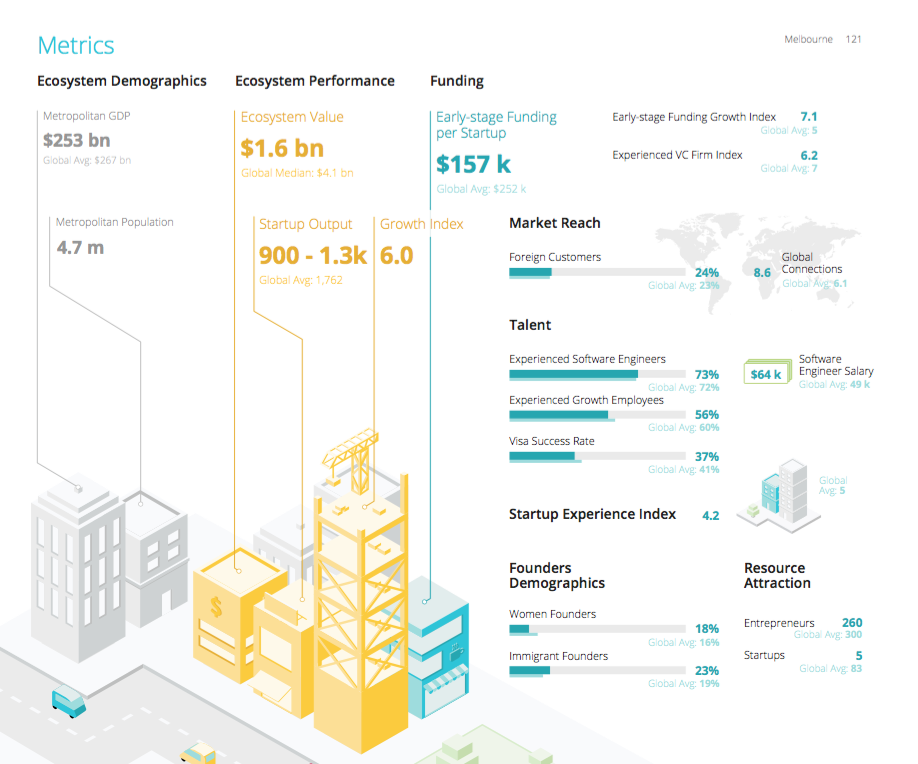 New Zealand, home to accounting app Xero and RocketLabs, was also profiled in the Genome report, praised for its “spirit of collaboration and inventiveness” and recent legislation that liberalised capital markets. It’s home to an estimated 400-600 “ambitious” tech startups.

“The country’s talent is attracting attention from worldwide tech giants such as Google, who is now using New Zealand as a testing bed for the future forward technology Google Loon, which gives wireless internet access to the world,” the report says.

“Research shows that every dollar invested in tech sector productivity brings a $3 ROI—an impressive stat made possible in part by the New Zealand Venture Investment Fund and the $300 million that has been earmarked to boost the country’s vibrant early-stage investment market.”

In the overall Index, the country’s strongest factor is talent, the report says, followed by funding. Both are above average in the global comparison.

Here’s how the GSER saw the New Zealand ecosystem: 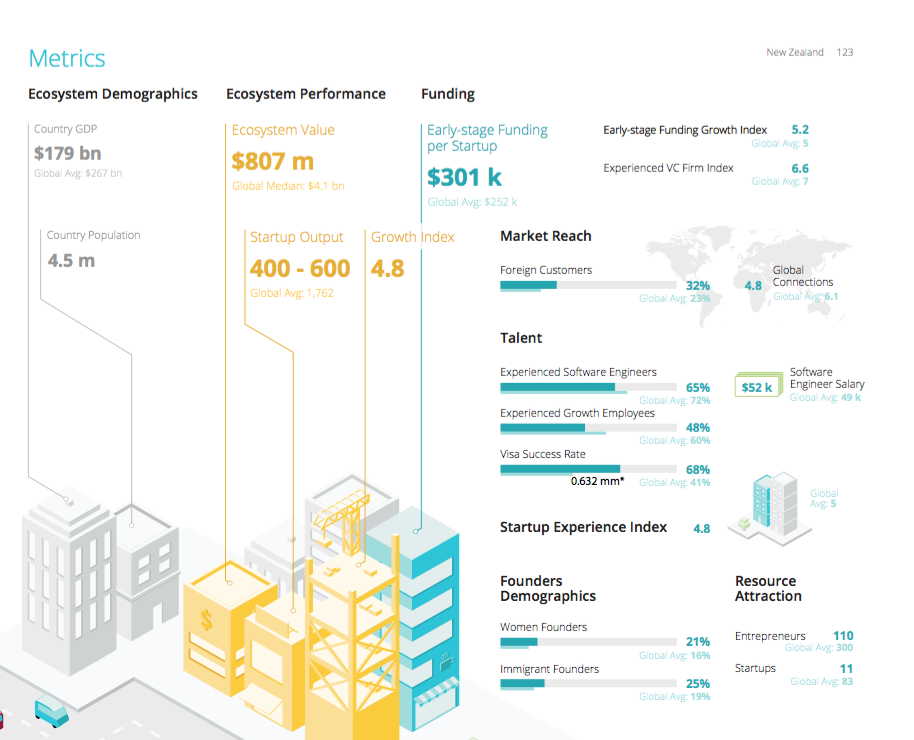