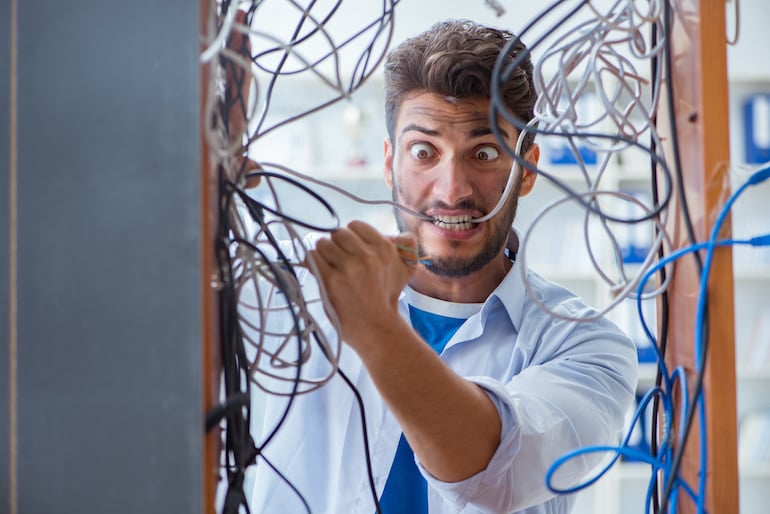 Australia is close falling out of the top third of nations when it comes to digital competitiveness according to a new global report.

The 2021 IMD World Digital Competitiveness Ranking (WDCR) has found that the country fell five places in the rankings to 20th place among 64 countries benchmarked by the annual report.

Problems with business agility, along with digital skills and training, were among the nation’s critical weaknesses singled out in the WDCR analysis.

CEDA (Committee for Economic Development of Australia), an independent think tank, is the Australian partner in the rankings report the produced by the Switzerland-based International Institute for Management Development World Competitiveness Centre.

CEDA CEO Melinda Cilento said that despite the Covid-19 pandemic leading to the rapid adoption by businesses of digital opportunities, Australia is not keeping pace with the rest of the world.

“Of particular concern is Australia’s poor performance in terms of future readiness – our worst result in  the history of the index – which unpins a country’s ability to sustain its digital competitiveness over  time.

Cilento said the slide in the global rankings underlines the challenge Australia faces to meet the federal government’s ambition to create a leading digital economy by 2030.

“One immediate step the federal government could take towards that 2030 goal is to appoint a Chief Technologist, she said.

“A Chief Technologist would work to build community trust and understanding in emerging  technologies, including through transparent technology assessments, and would provide leadership across emerging technologies, knowledge and future preparedness.”

The good news is the WDCR report found that Australia still has plenty of strengths, including its regulatory framework, support starting a business, its IT integration in terms of software piracy and E-Government. However, the nation ranked 55th out of 64 for business agility, with executives ranking themselves particularly poorly for agility of companies and responding to opportunities and threats.

And despite the Morrison government’s commercialisation push for tertiary sector research, Australia ranked just 31 for knowledge transfer between companies and universities.

“Unlocking greater collaboration between universities and businesses in line with the federal government’s University Research Commercialisation Scheme Taskforce will be a necessary spark for investment, innovation, and value creation,” Cilento said.

While nations that ranked highly had strong performance in the talent and training and education categories, Australia recorded significant falls in those areas during a year of closed borders. The trend was dramatically down, with the nation sitting at 45 in international experience, down eight places from last year, 44 in digital and technology skills, down four places, and 58 in employee training, down 10 places.

“Continued skill shortages in the technology space will restrict the ability of businesses to embed  digital improvements in everyday business processes and stunt future innovation,” she said.

The US once more held top spot on the WDCR list for the fourth year in a row, ahead of Hong Kong, which climbed up from 5.

Responsive consumer attitudes, the prevalence of technology and business confidence in accessible venture capital are among the US strengths.

Japan, South Korea and Taiwan made rapid rises through the rankings. China has risen 15 places in four years thanks to expanded levels of scientific and educational attainment, highly productive R&D and a leading global share of high-tech exports.

The rankings report found that the US outspends China on education as a proportion of GDP at almost double the rate (6% against China’s 3.5%), although China tops global rankings for mathematical literacy among the young (the US ranks 36th).

Here are the top 30 nations ranked by digital competitiveness 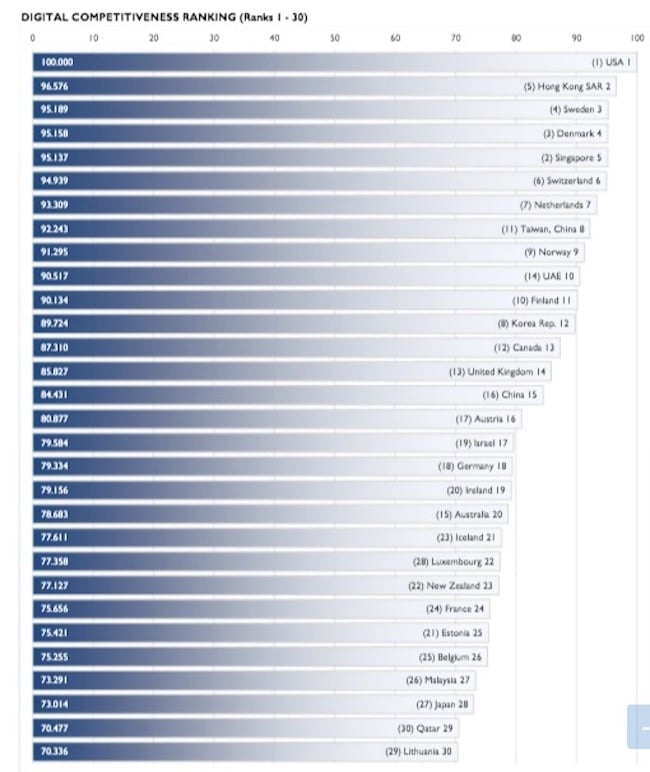 Previous article When an investor asks if your startup is ‘a vitamin pill or a headache pill?’, here’s what they mean
Next article Startup Daily TV: All about NFT Fest, the new, free, day-long deep dive into non-fungible tokens this Thursday
Via Topics
Tags CEDAdigitalIMD World Digital Competitiveness Ranking