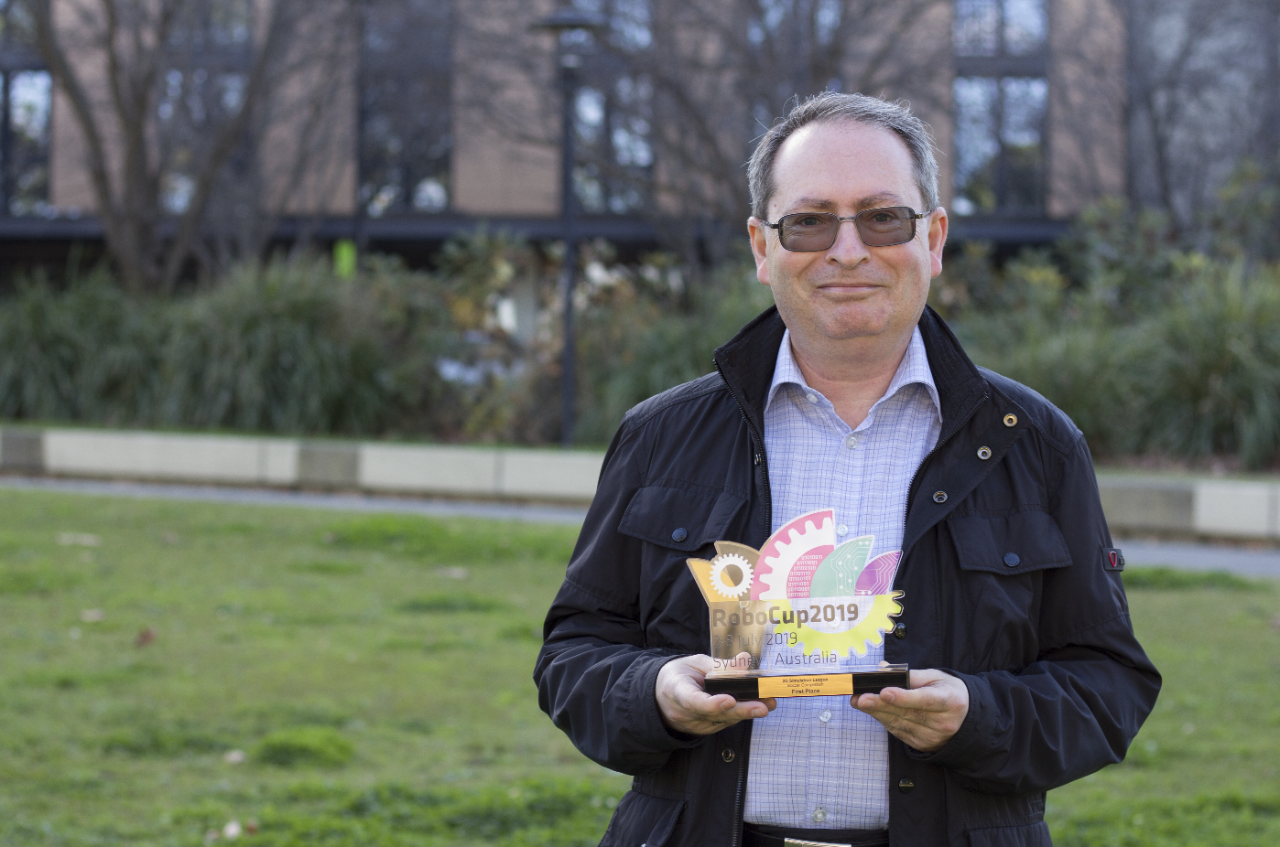 Professor Prokopenko’s with the RoboCup 2019 trophy. Photo by Luisa Low/University of Sydney.

Researchers from the University of Sydney, in collaboration with scientists from the CSIRO’s Data61, have won a soccer world championship, but didn’t need a field to do it – the victory came in the 2019 RoboCup’s Soccer Simulation 2D League.

The winning Australian team, Fractals, was led by University of Sydney Director of the Centre for Complex Systems, Professor Mikhail Prokopenko and included Peter Wang, a senior research engineer with Data61. They beat the 2018 world champions Helios, from Japan’s Fukuoka University and Osaka Prefecture University.

Australia was among 15 international sides from Brazil, China, Germany, Iran, Japan and Portugal who had to build and program teams of fully autonomous virtual robots.

It was a tough grand final, remaining scoreless at full time before the Australians scored the winning goal with less than a minute to go.

It’s the second victory in the 23-year-old competition for Professor Prokopenko.  The Fractals played 22 games in the four-day tournament, winning 16 times and outscoring their opponents 59 -10.

“The 2D Soccer Simulation League is a complex game as it requires intelligent agents to autonomously make optimal and strategic decisions in a high-stress, ‘noisy’ environment, all while facing the disruptive actions of opposing teams,” Prof. Prokopenko said.

The Fractals team had to built each ‘player’ with virtual, acoustic, physical and visual sensors to navigate and detect the cyber playing field, performing actions like running, turning and kicking the ball.

“The main challenge is to get the agents to work together as a team, which we achieved by coordinating the individual agent actions across a multi-agent team, in order to produce coherent tactics,” Prof. Prokopenko said.

And while it all sounds like a bit of fun, the implications are serious, with the annual tournament developing several important technological advances in autonomous decision making and artificial intelligence, such as flexible tactical planning, collective behaviour and teamwork, as well as opponent modelling and adaptation.

Here’s a video of the grand final game if you have 14 mins to spare.