When it comes to customer service, Facebook’s recently announced Messenger bots are the talk of the tech world, and Sydney foodtech startup HowAboutEat has worked fast to integrate the new feature into its offering.

The startup, launched last year, looks to brighten up the office worker’s day by bringing lunch to their desk. Working from a set menu, it allows users to send customers an SMS each morning and asks them whether they want to opt in to that day’s meal. If yes, the meal will be delivered between 12-12:30pm.

After introducing email ordering capabilities a few weeks ago, cofounder Serg Metelin said the startup was excited to give customers another new channel to place their orders, with the Facebook bot allowing them to provide a richer experience.

Fellow cofounder Giovanni Ravone explained, “Via Facebook messenger we can now send a picture of the meal together with our ‘How about …’ classic message. The customer can simply tap on ‘Order now’ and doesn’t even need to type ‘Yes’ and, most importantly, we can give customers different options because the platform allows us to send different ‘lunch cards’ in one message.”

For example, Ravone said, upon sign up existing users have been asked to pick whether they want to receive either vegetarian or meat options each day. Messenger will now allow users to see both, opening up new avenues to give users more choice.

Also rolling out bots to its customers this week is Oneflare, which will allow users to connect with trade and services professionals in three steps. Firstly, when customers contact Oneflare through the messenger app, the bot will provide prompts, starting with pinning or searching their location. They then select the required service by selecting from popular categories, and lastly complete a short form on the details of their request, which then sees the job submitted where the customer will receive up to three quotes.

Adam Dong, cofounder and CEO of Oneflare, said that the bot “couldn’t be more convenient” for customers, who place 45,000 job requests a month through its platform.

“The launch of the Facebook messenger bot is set to see these numbers skyrocket, creating more customer jobs and in turn attracting more businesses to our service. It’s a win-win scenario for all involved,” he said.

While HowAboutEat said it has been testing the bots with a number of beta users and received rave reviews, and Oneflare investor Domain rolled out a bot a few weeks ago, others haven’t been so lucky with their automated interactions with customers.

As Mumbrella so delicately put it yesterday, an online fashion retailer made an ‘ASOS of [their] customer service’ on Facebook with its reply to a frustrated customer whose return had been lost by ASOS’s couriers. Others seeing the thread picked up on the fact that the replies were computer generated and, because this is the internet, began trolling the company.

You know you’ve lost control of the situation when people start parodying your customer responses in the comment thread. After one person commented “This thread is now the only thing that gets me out of bed in the morning,” another responded with: “If you could please send me a copy of your usual wake up times and just fire over a screenshot of your bed that’d be great. ASOS Adam.”

That triggered yet another auto-response from ASOS: 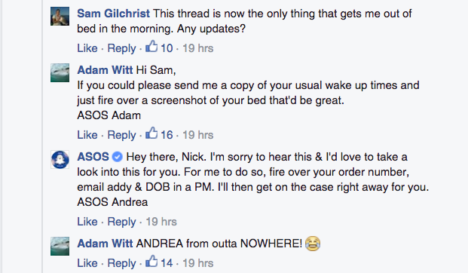 The main problem here is that ASOS continued to insist its replies were not computer generated and were in fact being written by its actual customer service staff.

As Nathan Kinch wrote for Startup Daily last month, Facebook is going for world domination with its messenger bots, looking to become “the de-facto user interface for brand-to-customer engagement.” However, as brands to seek to learn more about customers and gain more access to their data than ever, trust is more important than ever:

“For brands, building meaningful one-to-one relationships with those customers, relationships based on trust that is earned over time and through consistent delivery of value, is going to be key to long-term commercial success.”

Of course, both OneFlare and HowAboutEat’s growing customer bases will be aware that the new bot offering is an automated service.

Launched late last year, Ravone wouldn’t reveal just how many workplaces are now signed up to HowAboutEat, saying that the startup is “talking to a few companies bigger than us for potential partnerships”, but said the service has been growing at more than 100 percent month-on-month this year.

Among its customers are Virgin, Deloitte, News Corp, and ANZ, delivering to suburbs including North Sydney, Surry Hills, Ultimo, and the CBD.

With its growing customer base Ravone said the startup has been generating interesting data about the eating habits of its customers, which will be helpful in pushing further development.

“We have a very effective meal rating system via SMS so we are learning a lot about our users’ preferences when it comes to choosing lunch, and how it correlates to the days of the week, to the weather, and to their location.”