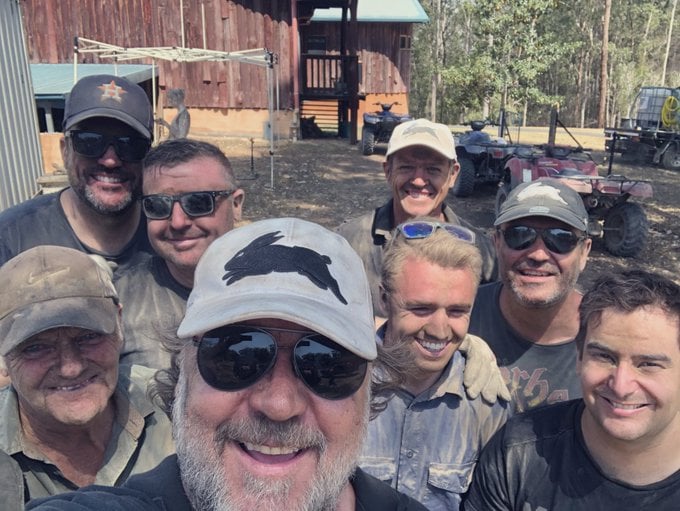 It all started with a sooty Rabbitohs hat.

Hollywood superstar Russell Crowe nearly lost his rural property on the New South Wales mid-north coast in the recent, devastating bushfires that have burnt out hundreds of homes Australia-wide.

On Friday morning, 147 bush and grass fires continue to burn across NSW with 60 still uncontained. More than 1,700 personnel are in the field, the vast majority volunteers. Worsening conditions are expected tomorrow and over the coming week.

The actor revealed just how close the shave was at his place on Twitter on Thursday. His Nana Glen property is in the hinterland behind Coffs Harbour.

Arrow indicates where my house is. pic.twitter.com/8NogDlP0GW

The house was saved, but among the debris is a burnt-out boat and trailer and plenty of other damage.

Crowe revealed the extent of the devastation as he tried to get to the house earlier this week and has been tweeting the recovery efforts.

Sent this to a friend. Thought I’d share with you too . Fires still burning , logs smoking everywhere you look.
Got halfway to where we were trying to get to, will try again in the morning when it’s cooler. pic.twitter.com/eCjR8QXXMm

He’s been clearing the road for access with a bunch of mates, and the South Sydney Rugby League team fan of course has been wearing a Rabbitohs hat.

Then Rusty decided to go one step further and on Thursday announced he auction his ash-stained Rabbitohs cap to raise funds for the local rural fire service, promising to match the funds donated.

Radio host Lawrence Mooney had the early running with a US$2000 bid and with 10 minutes to go before the auction closed, Atlassian co-founder Mike Cannon-Brookes stepped in with one of the best investments he’s ever made – a US$68,000 (AU$100,000) bid.

It came with conditions: “Sign it “Today is the day” and add your name, then find a kid affected by the bushfires & make his day by giving him the hat, then I’ll bid $100k AUD mate,” Cannon-Brookes wrote to Crowe on Twitter.

With Crowe matching it and now happily $100,000 poorer, suddenly the NSW Rural Fire Service had a much-needed $200,000 donation.

Crowe drew up a list of brigades receiving between $10,000 and $5000 each and the RFS was delighted.

And then Atlassian co-founder Scott Farquhar and his wife Kim Jackson decided to join the party and it was $300,000.

@russellcrowe @mcannonbrookes would love to join the party (unless 3 is a crowd)! The RFS do amazing work. Thank you both for leading the way. $100k from my wife Kim and I.

And then Rusty’s hat began to resemble Norman Lindsay’s Magic Pudding with the power to feed everyone.

It’s Thanksgiving in the US and Ryan Smith, philanthropist and co-founder and CEO of US software venture Qualtrics was watching. He chimed in too, saying “I’m not from Australia but have offices and friends there. Painful to watch. I’m matching @mcannonbrookes donation”

I’m not from Australia but have offices and friends there. Painful to watch. I’m matching @mcannonbrookes donation.

We’re waiting to see who joins in next, but the support for the NSW RFS is especially poignant when its a volunteer frontline against the fires that have ravaged Australia in recent weeks. The money is important and can dramatically improve the capacity of RFS volunteers as they risk their lives to save property and people.

It’s also a much-needed shot in the arm when the nearby Port Macquarie koala hospital unexpectedly managed to raise $1.4 million in a crowdfunding campaign to treat marsupial victims of the fires.

We’ll update this story if anyone else joins in on the best – and fastest – tech raise we’ve seen in 2019.

If you’d like to play your part and donate, either to the Rural Fire Service or to charities helping the victims of the bushfires, check out the NSW RFS page here for a list of options.

Previous article Zip Co. goes on a $60 million hunt for more cash
Next article 5 things you should know about tech today
Via Topics
Tags Atlassianbushfires