Atlassian’s market capitalisation has topped A$50 billion after revealing its latest quarterly earnings.

Despite increased losses on last financial year, the Sydney-based tech giant impressed market analysts with its accelerated push into cloud computing to shift its revenue base from licensing fees to subscriptions.

Earnings beat expectations and while the shares dropped initially in reaction to the increased losses, the market responded to the company’s increased shift to the cloud in the year ahead and its shares jumped nearly 10% to as high as US$149.80 before settling down around $146.

Atlassian’s co-founder and co-CEO Scott Farquhar said the 2019 fiscal year “was another outstanding year” for the company.

“We surpassed 150,000 customers during fiscal 2019 – a remarkable achievement for Atlassian and triple the audacious 50,000 customer target we set when we founded the company,” he said. “

This propelled us past the $1 billion revenue mark for the first time in a fiscal year.”

“In fiscal 2020, we will continue to invest in our Cloud business to serve the needs of the Fortune 500,000 and drive our long-term growth.”

Subscription revenue is predicted to grow by more than 40% year-on-year in FY20.

The Q4 operating loss was $32.4 million, a 12-fold increase $2.5 million for the previous corresponding period. The Q4 FY19 net loss was $237.5 million compared to a $21.9 million net loss in the corresponding quarter a year earlier

While Atlassian shares fell initially on the US Nasdaq, they bounced back dramatically following the management earnings call, with some analysts putting a $150 valuation on the shares.

Atlassian’s ambitions for FY20 are to repeated this year’s growth, with total revenue predicted at between $1.54 bn to $1.556 bn, up around 28% on the previous year.

More than two-thirds of Atlassian’s revenue is derived from the Jira project-tracking tools and Confluence document collaboration software. 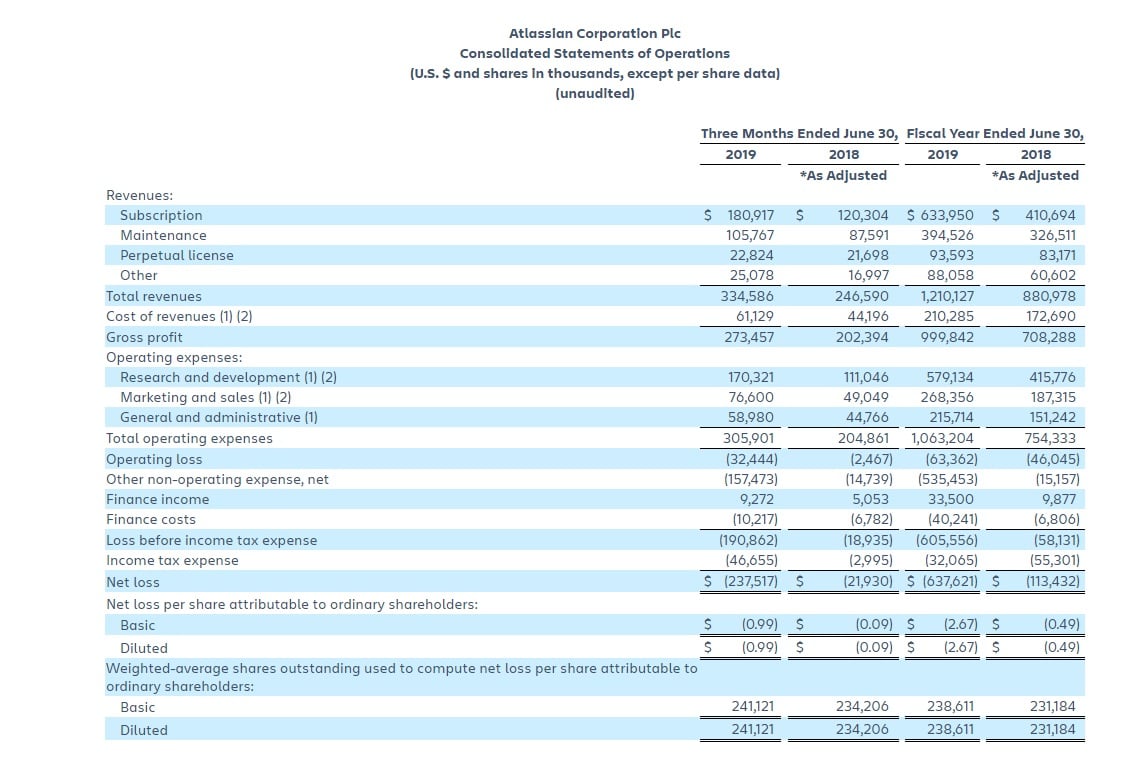 Previous article Telstra’s investment boss is worried startup funding valuations are the top of the market as VC competition pushes them too high
Next article Buy now, pay later startup Payright has raised $27 million in a Series D
Via Topics
Tags Atlassian