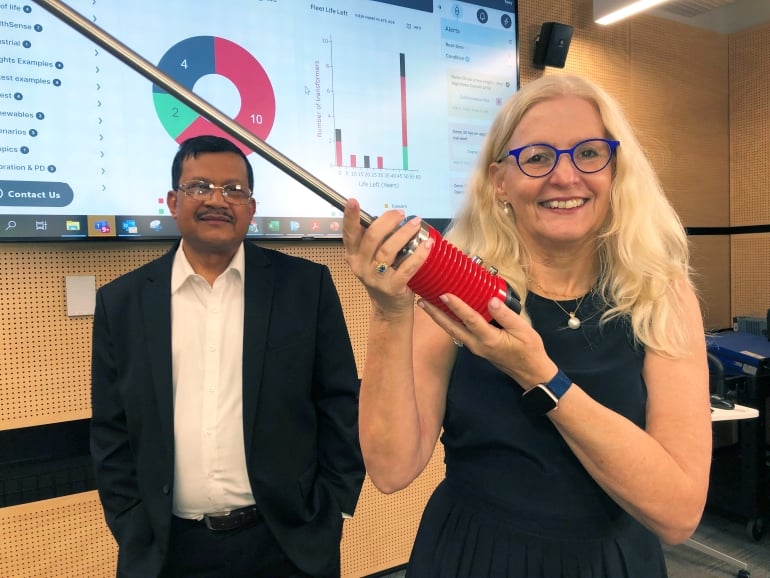 The startup, founded in 2017 by Dr Richard Harris, Steve McRae and Terry Woodcroft, was built on sensor technology developed at the University of Queensland technology to monitor the health of electricity network transformers.

Woodcroft, the company’s CEO, said the Aurtra develops remote industrial sensors to monitor ageing transformers. The tech provides automated online reports to electricity distributors of a transformer’s condition, highlighting insulation problems, damage, and any probability of failure ahead of time.

It’s been welcomed by the industry and Aurtra now operates in 16 countries, with the product shipped from Brisbane.

“The key was the combination of available capital and software architecture that facilitated ease of product roll-out and support and a unique product that delivered a strong return to the customer,” she said.

“It was during this expansion that Aurtra came to the attention of Schneider Electric.”

Woodcroft said the company initially collaborated with major electricity distribution companies in Australia to develop an economical way of monitoring the health of a large and ageing network.

“This transaction just would not have occurred without grant funding from both state and federal governments, including vital seed money from the founders and a Brisbane-based family business, Brice Family Office,” she said.

In 2019, Aurtra subsequently raised capital from UniSeed, as well as investors in the Melbourne, Sydney and Brisbane Angels groups.

“It is remarkable that within five years Aurtra has managed to in-licence the intellectual property from UQ, build a successful company with global sales, and exit on strong terms,” he said.

“The remote sensing market is estimated to be worth up to US$2.5 billion and the technology is highly valued by asset managers as a way of undertaking preventative maintenance or controlled shutdowns.”

Professor Saha, who has worked for more than 25 years on transformer monitoring tools said he was thrilled to see the idea he developed now going to the next level with one of the world’s biggest energy companies.

“As an innovator of some of the original ideas that were licensed to Aurtra, I feel honoured to lead the team involved with the infant stages of the research that forms the pillars of the company,” he said.

Previous article KPMG is on the hunt for eco-startups tackling nature and biodiversity issues, offering a $100,000 prize
Next article Equity crowdfunding platform PledgeMe rebrands as Microwd to focus on female-founded startups
Via ASX
Tags mergers and acquisitionsnewsuniversity of queensland