Atlassian billionaire Mike Cannon-Brookes is walking away from plans to acquire Australia’s largest energy supplier, AGL, after the ASX-listed company rejected a second $5.5 billion takeover bid for the business.

Cannon-Brookes and his Canadian takeover partner, Brookfield Asset Management, upped their bid by 10% to $8.25 a share on Friday afternoon, valuing the business at $5.5 billion. The deal would have also taken on $3 billion in debt, alongside a promise to invest $20 billion to transition the business to renewable energy.

The Atlassian co-founder reported had a 20% stake in the project through his family VC firm, Grok Ventures. They planned to take the company private and accelerate the closure of AGL’s coal-fired power stations.

AGL (ASX:AGL) shares sat below the original takeover offer of $7.50 made and rejected by the board a fortnight ago, sitting at $7.43 at Friday’s market close.

As Cannon-Brookes said, announcing on Twitter that the takeover plan is now dead, the offer was 46% more than AGL’s share price 90 days ago.

The Brookfield-Grok consortium looking to take private & transform AGL is putting our pens down – with great sadness.

“Our path was the world’s biggest decarbonisation project. From Aus. The board are proceeding with their demerger path,” he wrote.

“This path is a terrible outcome for shareholders, taxpayers, customers, Australia and the planet we all share.”

A fortnight ago, when the first takeover offer was made, AGL shares sat at $7.16 following the company’s 1H FY22 results announced on February 10. The latest offer represented a 15.2% premium on that price.

This morning AGL Energy chairman Peter Botten said the bid ignored “potential future value” for shareholders from a proposed demerger that will split the company in two, with one side focused on legacy power generation and the other half on renewable energy.

“It also ignores the momentum we have recently seen in the business through our solid half year result, strong progress on the demerger, strong interest in our Energy Transition Investment Partnership and the improvements we are seeing in forward wholesale prices,” Botten said.

“The proposed demerger will be a catalyst for the potential realisation of shareholder value. It will create two industry leading companies with distinct value propositions.”

AGL’s share price has more than halved in just 18 months and has fallen more than 22% in the last year. 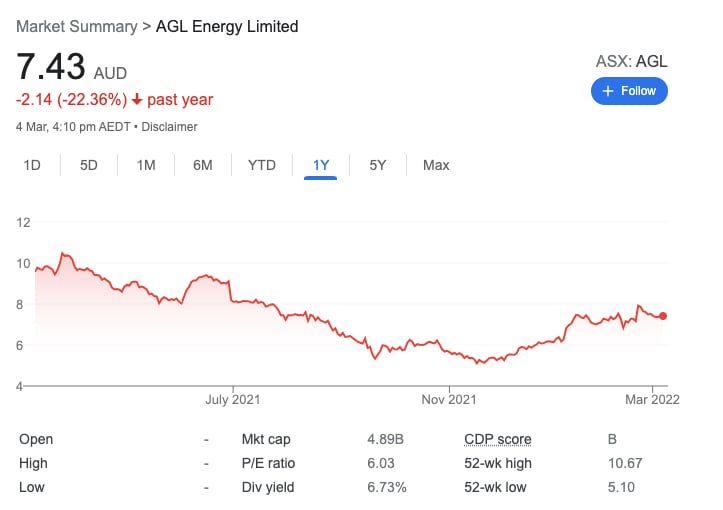 Cannon-Brookes, who last year committed to investing $1 billion through Grok on climate change startups over the next decade, has argued that a faster shutdown of coal-fired power stations would reduce electricity prices and that the demerger is “incredibly high risk for shareholders” and not good value for them.

Dan Gocher, Director of Climate & Environment at the Australasian Centre for Corporate Responsibility (ACCR) said AGL’s board lacked “skin in the game” when it came to personally investing in the company.

Gocher said that according to company records, putting aside from more than 300,000 shares CEO Graham Hunt received as an incentive reward, he last bought shares in the company in 2018 at $19.66. Chair Peter Botten last purchased AGL shares in September 2020 at $14.84.

“If the AGL directors believe the company is worth $9 or $10 a share, why on earth haven’t they been buying the stock, when it’s trading around $7.40?,” Gocher said.

“CEO Graeme Hunt has claimed that the Brookfield consortium should be offering a 30% premium to the current share price.

“If Hunt genuinely believes the company is worth that much, why has he not spent his own money on AGL shares since September 2018, despite receiving millions in remuneration since?”

Gocher said the board “has overseen a catastrophic decline in the share price of more than 70%” since their peak in 2017.

“The current directors have fundamentally mismanaged the energy transition, yet are asking shareholders to ‘trust them’ on the demerger. Shareholders should rightly be skeptical,” he said.

“The lack of ‘skin in the game’ from AGL directors suggests that institutional investors and retail shareholders are bearing the cost of the board’s poor decision making.”