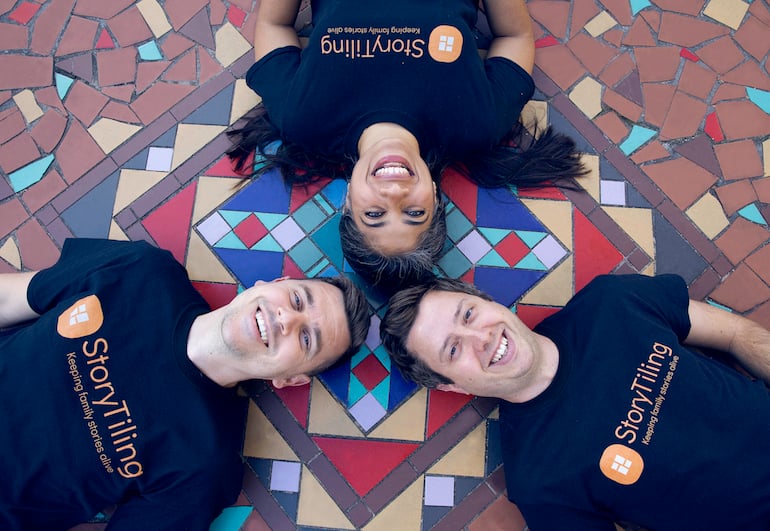 After travelling around the world and collecting people’s life stories as an anthropologist and filmmaker, Dr Aliaa Remtilla realised that everyone has a story to tell and everyone wants these stories to be captured.

However, most people don’t know how to go about doing it. With a strong belief that every person’s story matters, Dr Remtilla founded StoryTiling, an app that helps families keep their stories alive.

Through the business she wants to help everyone create their own modern family tree by attaching context and meaning to facts, records and photos.

“Our vision is to make it easy for people to keep their memories alive through what we offer, which is a guided story-telling process powered by anthropological science,” she said.

“StoryTiling gives you your family legacy on a device – in your pocket – as it were.”

Dr Remtilla has been developing the platform in close conversation with potential users. One thing she’s learned is that different people like to communicate through different mediums, such as audio, video or text. This means that the ability to record stories in all forms will be important.

“What we’re trying to do right now,” Dr Remtilla says, “is make people love telling their stories through our product. That’s the ‘big problem’ we’re trying to crack at the moment.”

Dr Remtilla has been developing StoryTiling with the support of Antler, a global early-stage VC, and has it to thank for meeting her co-founders, Ben Billy and Peter Kovalsky.

“They are two of the most incredible people,” she says. “There’s so much that we share. We are incredibly aligned on our core value systems, our ethics, and the type of business we’re trying to create. We all want to build something that’s purpose-driven and makes a positive impact in the world.

“At their core, Ben and Peter are kind-hearted, good people who are really smart, very capable and highly driven. And I would not have found them without Antler.”

The co-founding team is ambitious with their plans for StoryTiling. Given that everyone in the world has a story to tell, the market potential is immense.

“The amazing thing about our product is that it has the potential to be global from day one. So our eyes are on the world,” she said.

“We’ll start with English, although we’ve already realised, with our prototype, that even if our app is in English, people are able to tell their stories in other languages.

“While we have started to work with translation software, we want to crack English first. But we do expect this to be a product that very quickly moves beyond English speaking countries.”

With a vision of helping families capture their emotional legacy before their stories are lost forever, StoryTiling promises to strengthen family connections and enhance people’s sense of identity.

“Our purpose is to empower every one of us to better understand the human experience.

“The need for such a product could not be more acute.”