Acquisition of Newsle shows a thirst for new media tech. Could Sydney based Newsworthy.io be next? 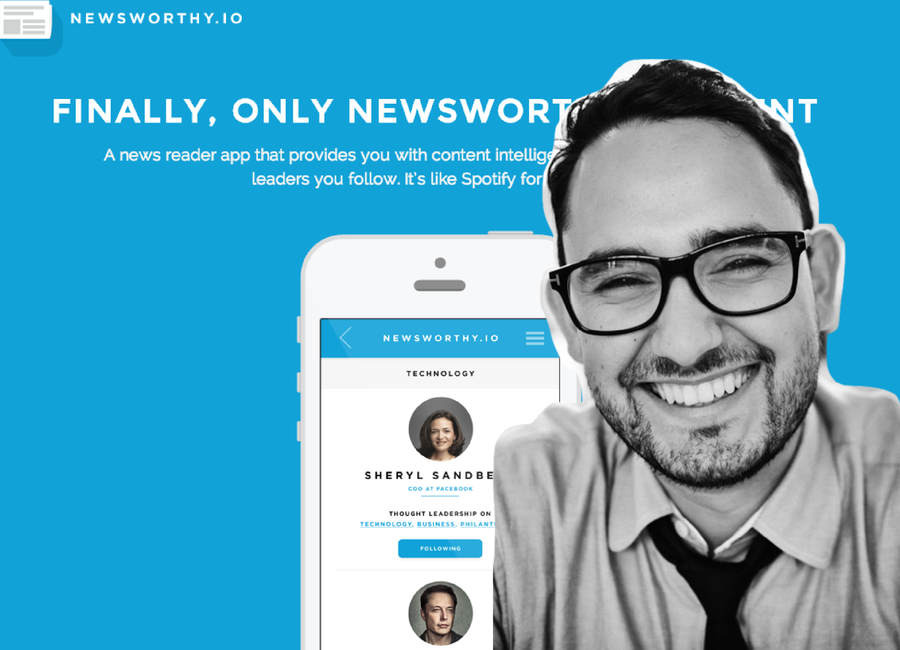 Yesterday’s announcement about the acquisition of Newsle by LinkedIn is certainly no surprise. The only thing I did find interesting was that Facebook never beat them to it.

The verdict is in, and it’s loud and clear. When it comes to media these days, light, fluffy and appealing to the masses is not what the next generation of consumers want to engage with.

People now ask themselves three questions before they click on a link to media now. Is it relevant to me personally or others in my circle? Does it inspire, educate or entertain my specific interests? Or does this compel me to voice my opinion about it?

This is the type of content that goes ‘viral’ now. Social media has changed the news system, and now that media is totally a democratised industry, a person that writes one personal blog post a day can rival the traffic for the month of the Sydney Morning Herald online. A recent example is the My Startup Failed post that Nikki Durkin wrote on Medium.

That singular post received over 150,000 unique browsers, and was picked up by all the major press. That is one tenth of the unique monthly browsers of the SMH (online) – in one single day.

LinkedIn stated yesterday that they and Newsle share a common goal:

“We both want to provide professional insights that make you better at what you do. For example, knowing more about the people in your network – like when they’re mentioned in the news – can surface relevant insights that help you hit your next meeting with them out of the park.

“We’re excited to work with Newsle’s team to combine this technology with our core assets and build experiences that continue to make you and millions of other professionals more productive and successful.”

Social channels like Linkedin and Facebook have done to News and Media what they did to Retail. In the same way people turn to social media before making choices on what they will or won’t purchase, they are now doing the same thing (albeit more seamlessly) for the types of content they will or will not choose to engage with.

The Newsle acquisition is a perfect fit for LinkedIn. Keeping up to date with what connections are saying or having said about them in the media is helpful when it comes to lead generation and closing deals.

I am also certain that Newsle and founders Jonah Varon and Axel Hansen will play a critical role in helping Linkedin filter out the noise when it comes to their Linkedin Influencer program.

This acquisition has taken place four days into the Kickstarter campaign for Sydney based startup Newsworthy.io.

Co-founder Mehran Granfar told Startup Daily that the reason the company chose to launch via a crowdfunding platform was to validate their concept, determine whether there would be traction for it, and ensure the core messaging was correct.

In proving my rhetoric that media tech is “so hot right now” Granfar also confirmed that even over just the four days the crowdfunding campaign has been live, the exposure has instigated a number of conversations that he will be following up in person at the end of the month in San Francisco and New York.

What I like about Granfar, and why I think that he and co-founder Bronwyn Leong are going to execute in the space brilliantly, is based on the fact they understand that what they are trying to do is a very clear departure from what most people understand to be social sharing.

Granfar says we have become mindless drones, hunting for good content among a pile of mess. He hopes in the future that behaviour-driven curation will distill content.

“It’s cheesy, but we’re convinced the future lies in attempts like Newsworthy.io – purpose specific applications or websites that draw on ‘in-content’ behavioural data to infer content merit. Spotify has done it with music. It’s only a matter of time before other types of content will follow suit,” he says.

“The point to stress, is that this is a clear departure from ‘sharing.’ See, a share is a whole different beast – a subjective beast, that can be prompted by any number of reasons, not necessarily as a measure of quality.  Contextual behaviour is a much more powerful way of ensuring quality curation. From a user’s perspective it’s also a lot more effortless, as it is an intrinsic part of the experience, not one that requires extra effort.”

Currently social feeds are the number one source of content globally. This means our sources of content are literally being fed to us by people we know (and are connected to), regardless of whether you value their opinion or not.

The purpose of Facebook or Twitter was always to be a way to connect with others, or share an opinion. As much as these companies attempt to evolve into something else, they will never ever be a source of quality content.

They may not have launched yet, but if they bring the vision to life, it would make perfect sense for a larger media organisation to snap them up. Although crowdfunding might be doing a great job in validating the concept for them, I personally think they should look at raising capital and get to market faster.

There are too many movers and shakers entering this space for them not to.