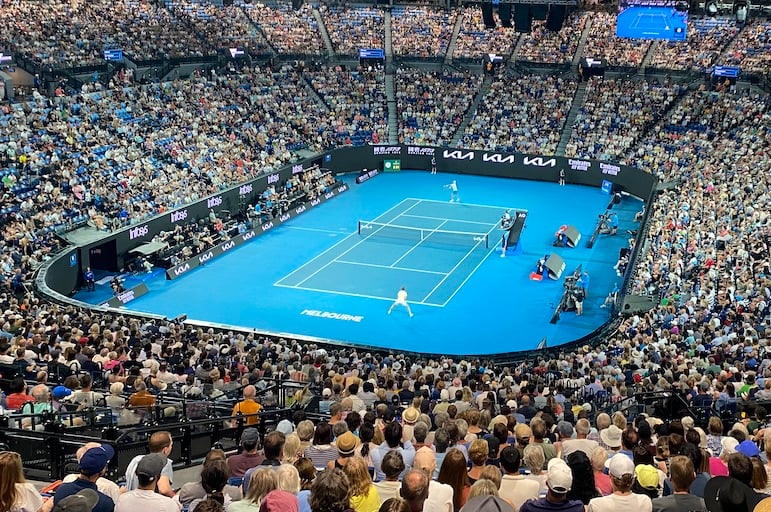 The startups were chosen from among 165 applications to the program, which is designed to help early-stage companies pilot cutting-edge technologies at the Australian Open (AO) and tennis more broadly.

And it’s not just about sportstech – the ideas involved span climate tech and food, clothing, equality, and generative AI.

The first of the five announced so far is compression garment manufacturer CAPE Bionics. It’s having its products introduced to players at the Grand Slam tournament ahead of a full-scale integration into Tennis Australia’s National Tennis Academy Program throughout 2023.

“CAPE has achieved some really promising results with athletes in the NBA, NFL and NHL, and we look forward to seeing similar cut-through in the world of tennis,” he said.

“Tennis players have some of the most demanding recovery and travel requirements of any athletes.  Cape is proud to join this first cohort of AO Startups and show how prescription compression can bring genuine benefits in performance and wellness to these elite tennis players,” Dr Waldie said.

“Forget off-the-shelf athleisurewear – when it has to work, custom-fit compression as used by the medical industry is the only option.”

Another participant is cleantech startup Calyx, which provides data-driven insights to understand the environmental impact of food to help growers, brands, retailers and consumers to make more sustainable choices.

Calyx is working behind the scenes at AO 2023 to footprint food menus, detailing the environmental impact, including carbon emissions, biodiversity and water, with the goal of their sustainability being displayed on food menus in the future.

Calyx founder and CEO Lauren Branson has spent more than 20 years working in biodiversity and conservation, seeing first-hand the impact climate change has had on biodiversity and ecosystem function and wants to create data-driven insights to reduce the impact of our food systems.

“With close to one million fans visiting the AO each year, we love the idea of deepening their understanding of the environmental impact of food choices through impact transparency, which might include labelling menu items with a Climate Score or carbon footprint,” she said.

“Food is something tangible in our everyday lives and takes centre stage at the Australian Open. It’s an exciting opportunity for Calyx to partner with Tennis Australia through AO Startups and help educate their stakeholders on the impact of food choices and support TA to be the innovative, climate leader they have committed to being.”

Recut is a generative AI-based text-to-video technology where users can create infinite permutations of their own video content customised to individual viewers, engaging and delighting audiences like never before.

“A lot has been written recently about generative AI particularly with ChatGPT with text and DALL.E in visual imagery. However, we are excited to see where we can take this with video in working with Recut,” he said.

“This is genuinely cutting-edge technology, and we are certain in the years ahead generative AI in video will become commonplace in sport to more deeply engage fans.”

Tennis Australia is piloting Recut during the AO to create hyper-personalised videos behind the scenes with CEO Craig Tiley to the thousands of staff that make up the AO team.

“With our technology, we’re able to deliver unique and immersive individualised fan experiences that were previously impossible,” he said.

“We’re incredibly excited to be partnering with with Tennis Australia through AO Startups to be part of one of the world’s premier sporting events, and to explore the limitless possibilities that generative AI brings to entertainment.”

MATCHi is the world’s fastest growing booking system for racquet sports. The MATCHi application will be piloted by players and venues across Australia throughout 2023 and play a critical role in helping support the growth of complementary formats and racquet sports such as Padel Tennis.

“Padel is enjoyed across more than 90 countries and by more than 20 million players and while the sport’s introduction to Australia is only relatively new, there’s already significant uptake in its popularity,” he said

CEO Daniel Ekman launched MATCHi in 2012 and has overseen its growth from early beginnings in Sweden to becoming a global platform.

“Joining forces with Tennis and Padel Australia is an important milestone on our path towards being the obvious platform for the global racquet sports community,” hesaid.

“We are stoked to have this opportunity to help drive racquet sports engagement in one of the top markets in the world.”

The fifth startup chosen – the remaining two will be revealed before the Australian Open ends – is equidi, which helps companies tackle issues around equality and equity, including pay, opportunity and representation gaps.  The regtech platform offers real-time visibility over key issues around equity and inclusivity via a single dashboard, and also also creates AI-generated recommendations to drive action, as well as the tools, resources, and strategies to set goals, track progress and lift performance.

The Tennis Australia People and Culture team are using the Equidi platform throughout 2023 to track progress and accelerate its efforts toward gender equity targets.

People & Culture Director Scott Glover said equidi’s tech “will be hugely beneficial to accurately compare pay gaps and representation in real-time across every part of our workforce as well as check how we are performing against industry peers.”

CEO and founder Natalie Flynn said Tennis Australia is an organisation with aligned values and a long-standing commitment to levelling up the balance on gender for good.”

“We’re excited to be leading the paradigm shift in how gender equity is being addressed by businesses today and look forward to helping them see the change and be the change – doing good business – even better,” she said.

Previous article Building the Machines: Main Sequence VC investor Phil Morle on his plans and the possibilities for startups in 2023
Next article With Big Tech sacking tens of thousands of workers, how worried should you be?
Via Accelerator
Tags AcceleratorTennis Australia