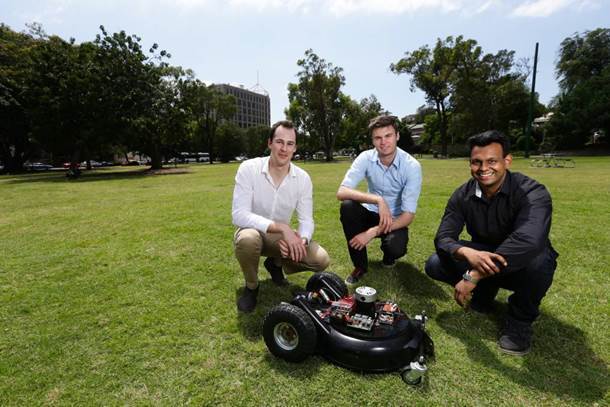 But it also has a burgeoning startup scene, with more than 50 startups backed up by more than 10 co-working spaces and some R&D heavy hitters, such as the CSIRO’s Energy Centre, the Hunter Medical Research Institute (HMRI), University of Newcastle, aerospace ginats Boeing Defence Australia, and BAE Systems as part of the RAAF’s F-35 Joint Strike Fighter program.

This week six of the region’s most promising startups are in Sydney for the Hunter iF’s Startup Xpress pitch event at the Sydney Startup Hub.

Hunter iF project coordinator Richard Christian said not many people realise the area is actually Australia’s largest regional economy, with a number of startups having the potential to deliver the region’s next big economic boom.

The ideas being pitched to investors include one of the world’s most efficient wind turbines, a robot with human-like instincts – but doesn’t get distracted by weekend sport and can mow lawns and take out the garbage, and an app that helps prevent dementia deaths through social inclusion measures.

“This group of six breakthrough entrepreneurs were selected to showcase the types of world-class businesses that are being produced within our newly emerging innovation hot spot,” Christian said.

“We wish them every bit of luck as they showcase their work in front of some of Sydney’s most influential investors, industry and government stakeholders, and innovation ecosystem participants.”

Christian points to oncolytic biotech, Viralytics, a local startup up subsequently acquired for $502 million as it looks to turn the common cold virus into a cancer cells killer, as an example of the potential emerging from the Hunter.

The Viralytics product currently undergoing a Phase 2 clinical trial is called CAVATAK, a formulation of the common cold virus that has the potential to directly target, infect, multiply within, and destroy cancer cells, both at the tumour site and throughout the body, offering the potential to treat prostate, lung, melanoma and bladder cancers in a totally new way.

Here are the six Hunter startups pitching and what they do:

Diffuse Energy has developed the world’s most efficient wind turbine – up to twice as efficient as its competitors. The microturbine’s core technology can also be used in hydro turbines, building ventilation fans and HVAC fans, which, if rolled out globally, could save up to 20% of the world’s air-conditioning fan power consumption.

Elite Robotics has built an autonomous vehicle technology gives robots human-like instincts, such as the ability to navigate new environments without being trained. It uses an intelligent navigation system where probabilistic algorithms enable vehicles to navigate dynamic environments, without using artificial intelligence.

Hone is working with CSIRO on a technology so farmers can make instantaneous decisions on their fertiliser regime and maximise their crop yield. Its mobile technology combines miniaturised spectrometers with machine learning software to deliver real time test results of soil, crops and produce for farmers and agronomists in the field – preventing a common and costly problem: over-fertilisation. The software platform has been described as the ‘app store’ of lab testing because it has the capacity to expand into fields such as food processing, water monitoring, and medicine. Australian cannabis farmers love it.

Uukoo is a dementia app that lets dementia sufferers have repeated positive interactions with their families and carers to create joy and increase mood, and reduce the likelihood that they’ll need medication. The founders believe social inclusion – used in place of medication – can prevent up to 75% of dementia deaths. It also has patient features such as ‘Top 10 things to know about me’ and ‘Things I like to talk about the most’.

Compeat Nutrition is an app-based dietetics and consultation platform acting like a sport and life performance coach in your pocket. It uses psychology and human behavior modelling to determine optimal nutrition decision making.