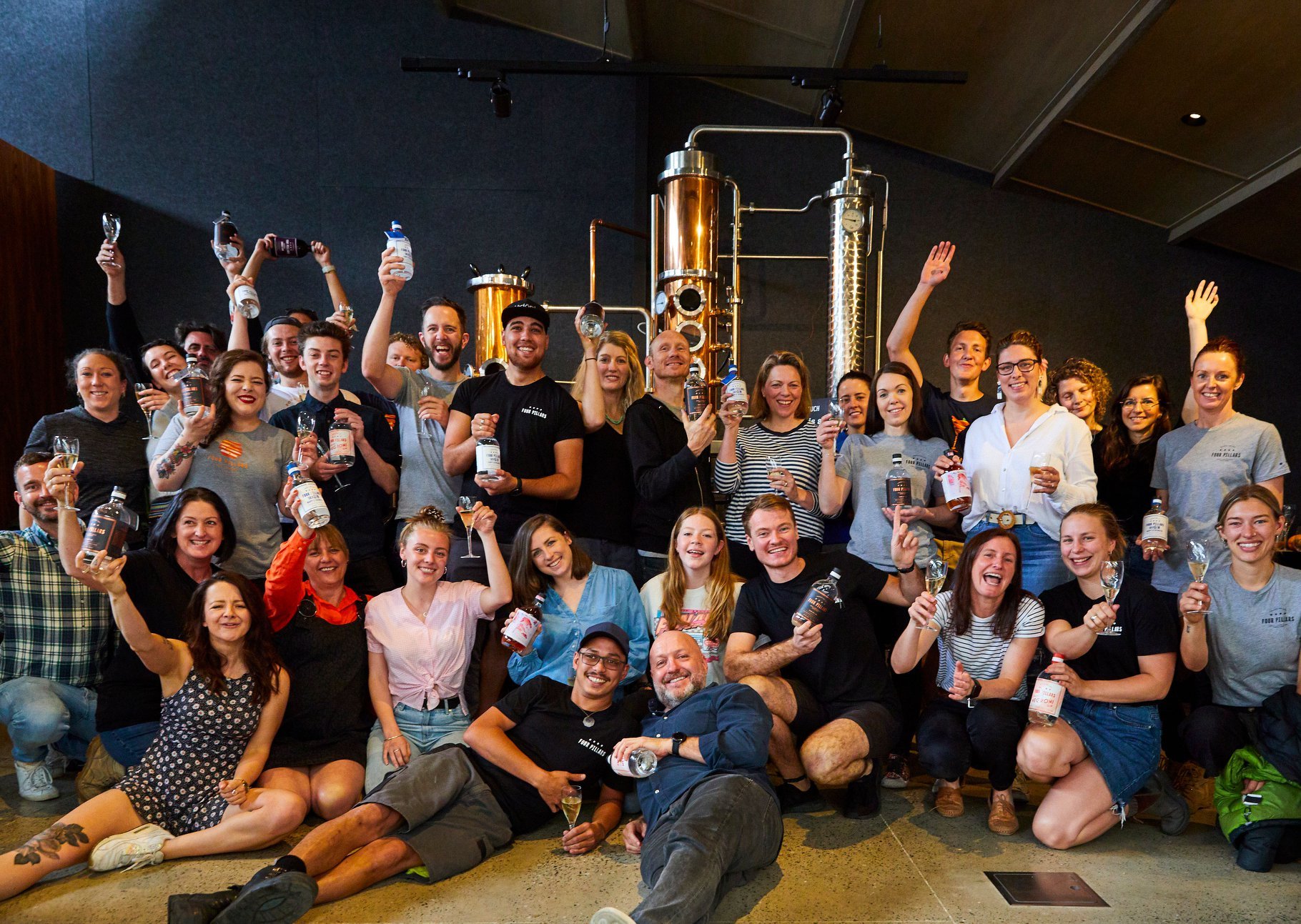 Massive congrats to Yarra Valley gin distillery Four Pillars (that’s the team pictured above), which has just been named International Gin Producer of the Year at the 50th Annual International Wine and Spirits Competition in London.

It’s been a big year for the business, with drinks giant Lion (a subsidiary of Kirin) taking a 50% stake in the business in April. Four Pillars is now in more than 30 markets globally.

“When we started making test batches of gin back in 2012 we never in our maddest, wildest dreams thought this could happen so quickly. To say that I am in a state of disbelief would be vastly understating the true state of my disbelief,” he said.

“This award is not for a single one of our gins but for the whole of our gin business and that’s what makes it so incredibly special.”

Four Pillars is the first Australian distillery to win the award. The IWSC is the world’s largest and most prestigious international competition for spirits with more than 3000 entries. It follows on from being the first ever local distiller awarded Australia’s Liquor Brand of the Year at the Australian Liquor Industry Awards.

Atlassian co-founder Mike Cannon-Brookes has been outspoken on climate change, and is walking the talk, backing a $30 million VC fund to make farming greener as well as a massive solar power project.

And today, along with Rusty, MCB and his co-founder Scott Farquhar dropped $100k each into the local fire brigades that helped save Crowe’s house on the NSW mid north coast. Then US software entrepreneur Ryan Smith chipped in $100k too and suddenly, the signed hat Crowe was going to sell for US$4000 an hour earlier to raise funds for the local firies was worth $400k. Read the amazing and heartwarming story of how it happened here.

So from a random, silly idea;
twitter auctioning this slightly used hat … atleast $400,000 Australian has landed with @NSWRFS today. I also see lots of people have got onboard & given what they can.
Thank you. pic.twitter.com/Lsda3HYb8W

Sydney SaaS startup Longtail UX, which boosts businesses website rankings and ad performance on Google partners, is expanding into the Japanese market with its automated SEO and SEM.

They’re partnering with local consulting and outsourcing firm Sophola and have already landed two major new clients: Japan’s largest temporary staffing company Recruit Staffing, and a travel and experience booking marketplace. Longtail UX is already in the US and UK.

The company is backed by the likes of SEEK’s Andrew Bassat of SEEK, and counts Dan Murphy’s, Kogan, Booktopia and Yellow Pages among its clients. Co-founded by ex-Googler, Andreas Dzumla, who believes Google is broken because 66% of product searches now happen on Amazon, he’s hoping to turn things around for e-commerce businesses. Longtail recently launched a free scorecard tool in Australian market, allowing companies to use Google Analytics to forecast ROI for both brand and generic keywords phrases.

SalesPreso Head of Industry Strategy Mark La Bozzetta said streamlining the creation of SOA documentation will save the industry thousands of hours in lost productivity annually. LivePreso Wealth targets the 20,000 advisers in Australia.

“Currently, an SOA can take between 4-10 hours to complete and the final product is either reams of paper or a static PDF document – either way, many SOAs are boring, hard to read and laden with compliance rhetoric that can confuse the client,” La Bozzetta said.

“Advisers can ensure they’re presenting clients with up-to-date information, maintaining compliance with a click of a button and turn their focus to ensuring customers understand what’s in front of them. With 70% of consumers learning visually, we figured there had to be a better way to communicate to clients such vital information so they can make more informed decisions about their finances.”

Indian startup Bounce, which runs the scooter version of ridesharing with around 17,000 scooters in major cities in has raised about US$150 million in Series D, backed Eduardo Saverin’s B Capital and Accel Partners India, according to TechCrunch.

The raise ups the value to the year-old startup to more than US$500 million after a Series C in June had it at $200 million. The venture, previously known as Metro Bikes, rent the scooters from US$1.50 and hour and reportedly has 2.1 million customers. Its success is making it harder for Uber and local brand Ola, although they’ve hedged with the US rideshare backing a local competitor Yulu and Ola behind Vogo. More here.

The evolution of the truck is here. Guaranteed shatterproof 😬 pic.twitter.com/RocTEkzzwI