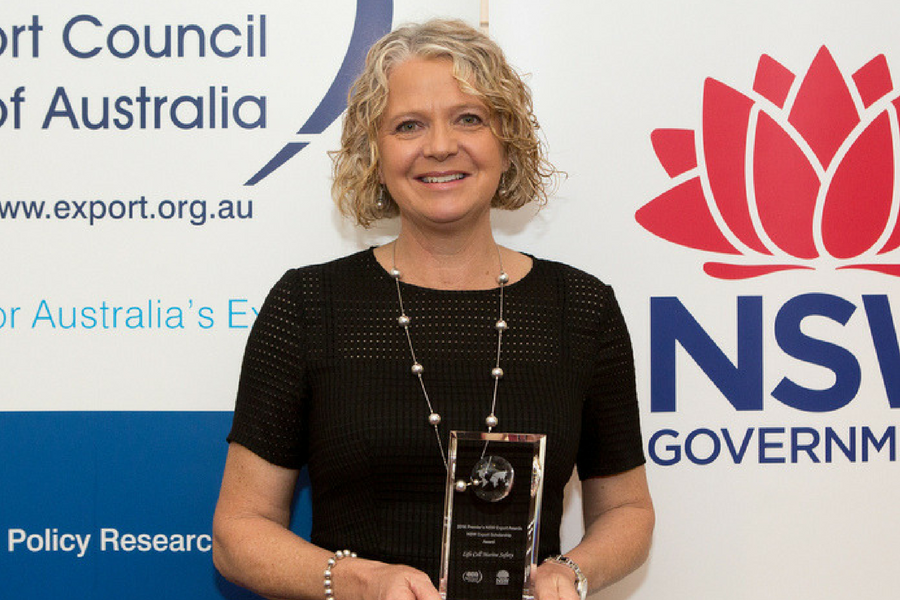 The best products and services are often born out of a problem faced by someone. While some may be more, let’s say, trivial than others, such as an app that saves you from standing in line to order your lunch, others can be the difference between life and death.

Such is the case of Life Cell Marine, the company behind the Life Cell, a flotation device designed to store all the essential safety gear one might need in the case of a boat going under.

The idea came to cofounder Scott Smiles after an accident he had out on the water with his friend Rick Matthews and their two 11 year old sons. Their boat sinking without warning 10 kilometres off the coast of Sydney, they found themselves holding onto an esky for safety before a Westpac Life Saver Rescue Helicopter came to their rescue.

Having been through that experience, Smiles thought there had to be a better system to store safety equipment, and sought about making it.

Jenny Aiken, CEO of Life Cell Marine and Smiles’s sister – and the person who had sold him the boat that sunk – explained, “Typically, in the past, safety equipment’s been stored out of sight, in hard to get to places, in bags and drums that can fill up with water if you do end up in water.

“Life Cell is designed to float free from its bracket, keep people afloat when they are in the water, and provide a stable platform from which to access all the safety equipment.”

With the idea for the kind of product he wanted in mind, Smiles went about developing a prototype with input from the Australian Marine Safety Authority (AMSA) to ensure that the Life Cell would meet its regulatory standards.

“It’s sealed with closed cell polyurethane foam, which means that even if the outer casing is damaged, the foam can’t absorb water, so it’s actually solid,” Aiken explained.

“It’s also fuel, fire, and impact resistant; when we went through the testing to be approved by AMSA it had to be dropped 30 metres, dropped in fuel, and exposed to a naked flame, all of those sorts of things that initially we didn’t realise the standards around the types of materials that needed to be used.”

With regulatory standards reached, the Life Cell went into production; from there came the task of finding a distributor.

Aiken, who came on board to provide the cofounders with business nous, said the company was “running out” of distributors to approach by the time it found the right one, at that time the largest marine distributor in Australia with a history of taking on newer, innovative products.

Not long after, the Australian distributor ended up being bought out by American company Land N Sea, which decided it too wanted to take the Life Cell product on, opening up the business’s international expansion.

“It was a huge learning curve in terms of dealing with foreign distribution, and the challenges around things like logistics and foreign currency,” Aiken said.

To help spur the product’s international expansion, Life Cell Marine obtained an Accelerating Commercialisation Grant from the Federal Government, helping to fund, in part, the company’s appearances at international trade shows to demo the product.

Through the grant process, Aiken was also paired with an advisor who suggested applying for the SBE Australia accelerator program, which is geared towards helping female-led businesses become investor-ready.

The program experience, and the subsequent capital raising process Aiken has been going through, has been an interesting one from Aiken’s perspective, coming in with a physical rather than tech-based product.
“[Investors] aren’t looking for a sure bet, they’re looking for a massive multiple return, and they don’t understand the product either, because their understanding is in the other space,” Aiken explained.

“They will say, I think you’ve got a great opportunity, there’s obviously a clearly defined path in terms of exit and making money, but it doesn’t fit their very view of what they’re looking for, which is that next internet-based solution or software product, so it’s quite difficult.”

Having established this quite early, however, Aiken said she has subsequently been looking to high net worth investors rather than the venture capital path.

As it looks to raise, the company has continued its international expansion, with Smiles having secured a distribution deal with West Marine, the largest marine retailer in the US.

“It doesn’t sound like much, but they’re massive, and they’ve said yes to taking our product, which is a really big thing. In the marine industry, if you get your product into West Marine, you’ve kind of made it, that’s the pinnacle, it might be like getting your product into Woolworths or something like that,” Aiken said.

“That was probably our most audacious goal when we started, thinking, imagine if we get into West Marine.”

Life Cell Marine is also working through the approval process of the US Coast Guard, to give the product further credibility.

The growth of the company, for Aiken, highlights the possibilities for businesses to grow from regional areas. Though she is based in Sydney, her cofounders are based on Corindi Beach, past Coffs Harbour on the north coast of NSW, while the business also outsources what processes it can, such as bookkeeping, to providers in regional areas.

“It can often be cheaper and a bit more personable than trying to deal with someone in Sydney. I think it’s also a good thing for regional Australia, because if you can have founders running an international business from there, you can actually grow a community as well,” Aiken said.

While Aiken said the team works hard to keep everyone informed around what’s going on, making sure to copy people into emails or forwarding something on to ensure people are across things, she said working remotely has not been a barrier.