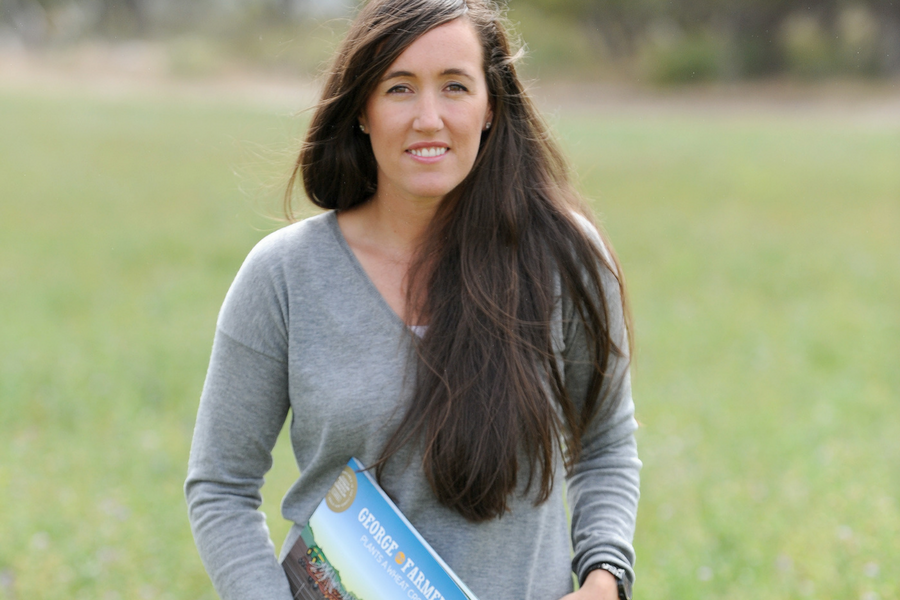 We all know kids will think and believe some crazy things, but some things are crazier than others: a survey of year six kids conducted in 2012 for the Australian Council for Educational Research found 27 percent believe yoghurt grows on trees, while three quarters believe cotton is an animal product.

Looking to fill these knowledge gaps is George the Farmer, a children’s character created by Simone Kain and Ben Hood to educate children about farming practices, and how food and fibre is produced, through picture books, toys, music, performances, and other mediums.

Kain said, “Establishing stronger connections back to the source will raise perceptions and place more value on food, ultimately resulting in a better dollar value being placed on commodities. If the consumer doesn’t understand how food is produced, how can they form an appreciation?”

As well as teaching kids about where their food is coming from, George the Farmer looks to educate them about the possibilities of life on the farm and the innovative careers available in agriculture – with the UN predicting that food production must increase by up to 70 percent by 2050 to feed the rapidly-growing global population, encouraging people into agriculture is paramount.

Based in the South Australian town of Penola, Kain is passionate about regional communities.

She launched her first company in 1999 at the age of 19, specialising in graphic design and website development; this was an interesting move at that time.

“If you think back to 1999, most businesses, especially in rural locations didn’t even have the internet, let alone a website. The main mode of instantaneous communication was fax machine. Luckily for me, being 19, I didn’t overthink these minor issues and the company ended up being a success,” she said.

A decade later, Kain merged the company with Hood’s company to form a full creative agency, Hello Friday, which works with organisations predominantly in the primary industries or education sectors around Australia.

The idea for George the Farmer then came in mid-2012 when Kain, pregnant with twins at the time, was lying on her bed one afternoon with her two year old son George.

“I was trying to find some fun farming apps or books for George to keep him entertained when his new brothers arrived. He was obsessed with the farm and any opportunity that he had to go with my farming husband, Justin, or to look at magazines with trucks, harvesters or tractors, he’d jump at it,” she said.

“All that I could find was American or English stories that used different terminology, such as barn instead of shed, or field instead of paddock, and there also wasn’t one character who was telling sequential stories about life on the land.”

At this time, Kain explained, with the local economy feeling the effects of the global financial crisis and slowing down, she and Hood had been looking at new ways to bringing in revenue to sustain Hello Friday.

Thinking there could be an opportunity in this storytelling piece, the pair decided to create their own character in-house.

“I’d always wanted to try my hand at writing a book and Ben was getting into his illustrations at the time, so we decided to write and illustrate a story to potentially inspire lots of little farming kids across the country, and if we created it as an interactive story app we could then use the app in our folio to try and gain future app clients for our agency,” she said.

Researching the first story ideas, Kain said she came across statistics around lack of food education for Australian kids.

“It was then that I thought, not only does George need to be inspirational, he needs to be educational,” she said.

In developing the character of George, his wife Ruby, and their family members, Kain said she and Hood looked to their own friends and family, with George’s personality in particular based on a friend also named George.

The stories are also based on real experiences friends and family have had on the farm, with the first story written, George the Farmer Plans a Wheat Crop, inspired by Kain’s husband.

“He came in one night telling me how he’d “run out of seed while seeding and hadn’t realised and how bloody embarrassing everyone driving on the road will be able to see my stuff up when it starts germinating!’ Actually, most times when he gets home there’s usually some funny story to tell,” Kain said.

“Needless to say we have a library full of storylines to refer to.”

Developing the George the Farmer app itself wasn’t quite as easy, however, with Kain admitting it was a lot more challenging that she thought it would be. Along with the usual challenges of developing an app and getting it approved for the various app marketplaces, Kain said another issue is the fact that consumers don’t value digital products like they do physical ones.

“Although we’ve achieved success with being regularly featured in the top books category on the iTunes store due to downloads or being listed in the top educational apps in the technologies section for Australia and New Zealand, consumers still balk when an app costs any more than 99c,” she said.

“We retail our physical books, which are printed in Australia, for $17 each. Our app includes two interactive stories, three songs and two mini games for $4.50, less than a cup of coffee. It’s cheap, and especially so for the cost of production. I’m not quite sure how we can change consumer perception on the value of digital products, but it’s something that needs to be worked on.”

George the Farmer and his friends have grown thanks to support from the regional and agricultural community, who Kain said are passionate about what they do and grateful that there is now an inspirational character for their industry.

Social media has also helped grow the initiative, while Kain and Hood have also taken to participating in events to spread George’s message. Over the past few weeks, for example, they played 70 performances at the Easter Show in Sydney, performed at the AFL Country Festival at the MCG, and the Territory Taste Festival in Darwin.

With this activity, Kain said sales are still higher in regional areas, however events are helping to grow in metro.

“Our Facebook statistics tell us that our main followers are based in city locations, which is quite interesting,” Kain added.

Much of the initial development of George the Farmer was funded through profits from Hello Friday, with everything George created in-house.

Earlier this year, Kain was also awarded the RIRDC Rural Women’s Award, which came with a $10,000 bursary to put towards a project. Kain’s is the development of two new curriculum-aligned teacher’s guides, which can help teach kids about agriculture while also addressing the other necessary learning outcomes. These guides will look to showcase to children the innovative careers in the sector, in particular for girls.

That’s on top of everything else they’re still doing – each year, Kain and Hood aim to create at least one to two new picture books, educator guides, and videos, as well as two to four new songs, and one new toy. Fifty cents from the sale of each book is reinvested into creating the curriculum-aligned educator guides.

As they keep creating new content, the George the Farmer team is looking at ways to keep expanding its reach; they have started workshopping to get George and his family on TV.

“We know that kids love him and Ruby when they meet them, we just need to give them the opportunity to connect,” Kain said.

“My dream is for kids across the globe, when they think of food, to immediately associate this with agriculture. And through George and Ruby, Australia will then be known as the number one destination for beautiful, clean, green and safe produce.”