From Kiwi innovation to Aussie growth: Inside the rapid rise of fintech Hnry 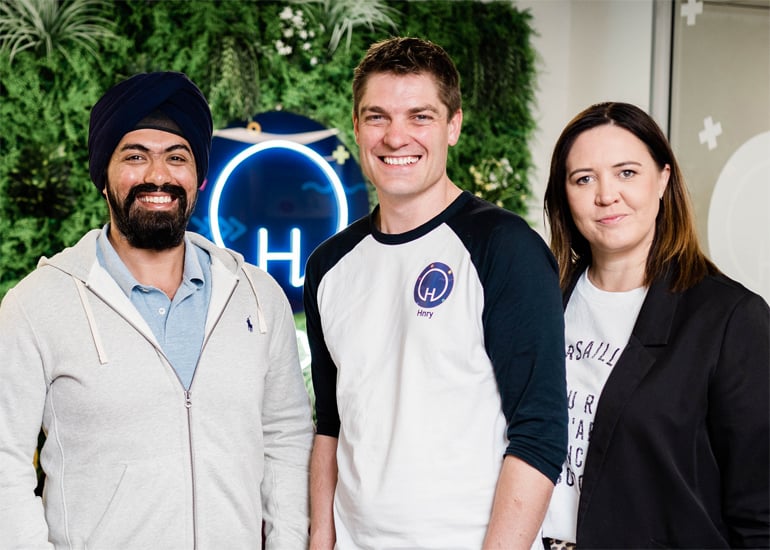 They say there’s no other certainty in life than death and taxes, but for many sole traders, doing their taxes is a kind of death. Death by a thousand numbers, receipts, deadlines and obligations. It’s enough to kill the startup dream.

Then along came Hnry, the affable Kiwi fintech startup that calculates and lodges your income tax, GST, BAS and PAYG for you. They’ll review your expenses, pay your Medicare and student loan obligations and even chase up your clients if they’re late paying your invoices.

“A sole trader should have access to world-class accounting services,” says Karan Anand, Hnry’s managing director in Australia. “Your sole trading business shouldn’t be hampered by the challenges that come with tax and financial admin. In fact, we can use digital technology to alleviate a lot of the stress that goes on with that.”

Choice, flexibility, accessibility – these are key values of Hnry’s proposition. “You go into contracting or freelancing because it’s a lifestyle choice. So, if it’s a lifestyle choice, your life shouldn’t be hampered by the stress that comes with [working] out what to do with business expenses, or chasing up invoices,” Karan says.

The company seems to have hit the bullseye with the gig-economy market. They’ve grown at a rapid pace since launching in New Zealand in 2017 and entering the Australian market in 2020. This was at the start of the pandemic, but that hasn’t proved an issue – they’ve doubled their team in the past year alone. Behind their digital interface is a team of expert accountants who provide high-quality, real-time support for Hnry customers.

“Providing access for that segment of the market to engage with best-in-class services that they wouldn’t usually be able to get because it’s too expensive,” he adds.

The company is Australasia’s fastest growing digital accountancy and New Zealand’s largest specialist tax accountancy. The basic Hnry process is that when you sign up to Hnry, you’re given a bank account. You then get paid into that account and Hnry automatically calculates the correct amount of GST, income tax, Medicare levy, student loans, superannuation owed – whatever is relevant.

The correct amount is paid to the ATO and your super fund and then the remainder is transferred to your personal bank account. It will cost you one per cent of the self-employed income that’s paid into your Hnry bank account.

“You only pay us when you’re earning,” notes Karan. “It’s an important part of what we offer given that many sole traders’ income isn’t consistent.”

The Australian office currently employs 14, with the larger team of 50+ based in New Zealand. You get the impression that ideas bounce back and forth across the ditch at a rapid pace. In fact, Karan estimates that he’s in online meetings on his laptop seven to eight hours a day in a 10-hour work day.

“I was the first hire of the Australian business, so I had to make an early decision around hardware, in particular laptops,” explains Karan.

His choice of Windows 11 Pro devices powered by the Intel vPro® platform will come as no surprise from someone who values making world-class technology affordable. He says the devices he’s chosen for his team stand out because of the “configuration, pricing and look and feel”.

“Since then it has not even been a question for everyone else that’s joined,” he added.

Having everyone on the same modern devices, wherever they’re working from, has also had an unexpected productivity bonus.

“We can troubleshoot things ourselves,” Karan says. “We don’t have a big, internal IT department to fall back on. So if there are things from a troubleshooting perspective, someone else has probably seen it and can fix it. That said, the biggest productivity benefit has been that these devices just work really well.”

Identifying a problem and solving it

Another thing that works well for Karan is Hnry’s dedication to solving customer problems. The company understands these pain points through lived experience. Its rise may have been rapid, but Hnry co-founders husband and wife team James and Claire Fuller, developed the accounting software after experiencing finance administration struggles when they were sole traders themselves.

“Claire and I came up with a system of spreadsheets to try and keep on top of all the financial obligations of being sole traders,” says James. “We had no intention of it becoming a business, we were simply solving our own problem.”

The spreadsheets the Fullers created were quickly sought out by friends and family. This sparked the idea for Hnry and the company hasn’t looked back since. They probably haven’t had time to look back, such has been the take-up of this unique sole trader solution.

“All the headaches that go with being a contractor – if we can take that away by using technology to solve this massive headache for people, then we allow them to participate in the lifestyle that countries like Australia and New Zealand have,” Karan concludes. “It’s the world’s best lifestyle.”

Is your business set up for hybrid success, like Hnry? Discover the latest collaboration, productivity and advanced security benefits of Windows 11 modern devices powered by the Intel vPro platform right here.

Bron is the editor of Your Money & Your Life. She has been writing in the Australian online space for over 10 years. Her work has appeared frequently on SBS, news.com.au, ABC Radio and various parenting publications.

Her Psych qualification means she's particularly interested in the psychology of money and how to form good habits to improve finances. Instilling good financial know-how from an early age is also a focus.

Bron is also the founder of parenting website Mumlyfe, which shares stories and advice for mums of older kids.