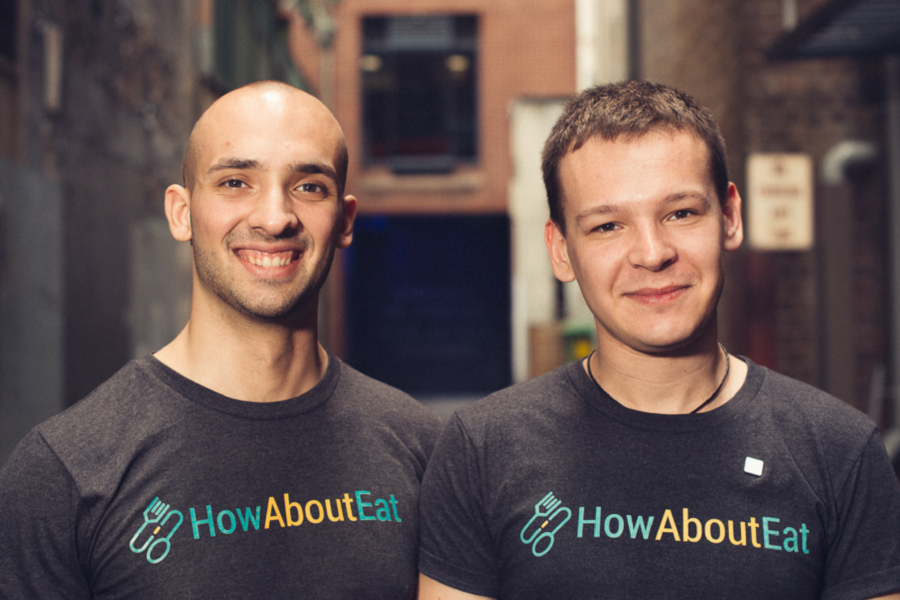 The thing about working in an office is that you can spend all morning daydreaming about what you’re going to eat for lunch, only to then get swept up in work and forget to eat until 3pm and then just eat a small, sad snack at your desk, or forget about eating altogether.

The team behind HowAboutEat, the latest startup to join the ranks of Sydney’s FoodTech army, know they can’t stop people eating at their desk, so they want to make sure people are at least eating well.

Founders Giovanni Ravone and Serg Metelin came up with the startup’s original premise – a platform allowing users to order products and services in bulk – for Disrupt@Scale, a joint Westpac and BlueChilli initiative. This idea one of four to make it through, and later evolved into HowAboutEat. The service works by offering a lunch a day and then texting it out to users, who simply reply with ‘Yes’ to get that item delivered to their workplace.

The idea first came to Ravone when he was fresh out of university and working at Citigroup in New York.

“I was very excited about everything but I would skip lunch because I was just too busy. And so I started to think, this is not nice, why can’t I have someone deliver it to me?” he said.

With one of the goals of the Disrupt@Scale challenge was to take advantage of large numbers of users in the one place, HowAboutEat As works by having workplaces as a whole sign up for to the platform, rather than individual users scattered around. The first text of the day advising users of the day’s meal is sent out at 10am, with users given until 11am to either reply ‘yes’ or just ignore the message. Lunch is then delivered to the office’s front desk between 12 and 12.30pm. Payment details are asked for and processed during the first order, with a delivery fee of $1 for each order.

The service is already active in four workplaces around the Sydney CBD. The involvement of Westpac as a corporate partner for the BlueChilli challenge means HowAboutEat is gearing up to launch for Westpac’s 4000 CBD employees in the coming weeks.

“Because of the model of the business where we just get one dish a day having 10 restaurants – and assuming a restaurant has three dishes to pick over time – gives us a month of turnover, which means an employee doesn’t see the same dish for at least 30 working days. Once we have enough restaurants in the area, then we sign up all the companies and we have a variety of dishes,” Ravone said.

The startup has brought on a third party for deliveries, though is exploring the viability of a mixed model where restaurants deliver themselves if they have the logistics in place to do so already.

Given the heated competition in the food space at the moment, Ravone and Metelin are carefully considering their every move to make sure they don’t put a foot wrong. However, they don’t see the likes of Menulog and DeliveryHero as competition.

In fact, they believe the fact that HowAboutEat offers the simplicity of just one choice a day works well for both customers, who are busy at work and don’t have the time to go through and pick from dozens of restaurants, and restaurants themselves, who aren’t competing with dozens of others on a huge platform. The fact that it’s all done through SMS rather than an app, with replying yes or no literally all the user needs to so, simplifies it further.

While fellow Sydney FoodTech startup YouChews is finding success by focusing on the startup and tech scene, Metelin and Ravone plan to cast a wider net.

“Starting with the startup community is always good because they’re open to try new stuff, they’re more tech savvy but for us, the busier you are at work, the better it is. So if you think about law firms or banks, consulting firms, those kind of agencies are very busy and they’re actually quite tech savvy. With those people they usually skip lunch because they’re too busy, and we can be there,” Metelin explained.

HowAboutEat was awarded $75,000 in seed funding through the Disrupt@Scale program, and is now looking to raise angel funding to help increase its marketing efforts and push growth around Sydney, expanding outside the CBD.

Ravone said, “We want to get at least to 500 orders a day, which is a lot, and after that, once we consolidate, we want to expand. We just want people to not skip lunch, so I think we can do it.”