We need to talk about startup lust 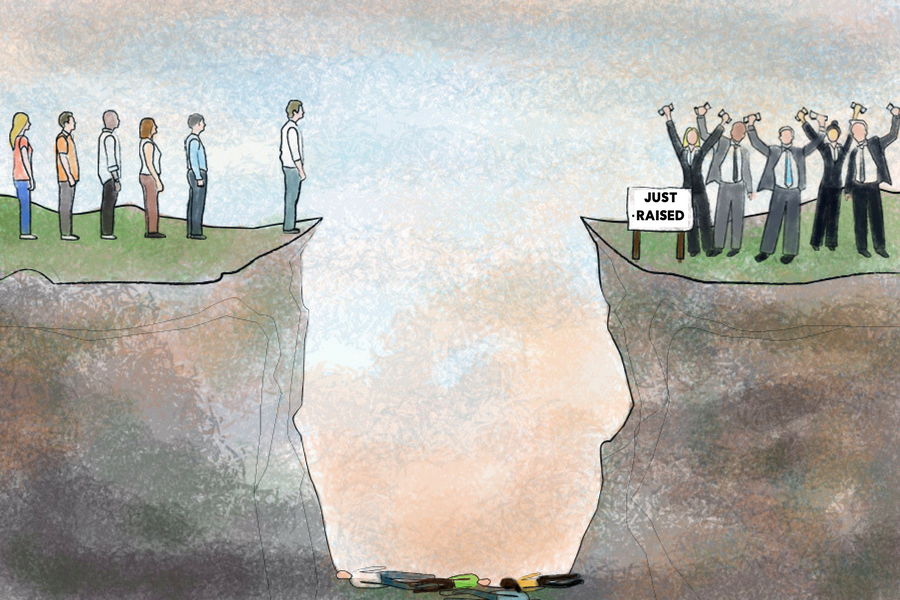 Startup lust is everywhere and in the same vein as bathroom mould, it can’t just be ignored forever.

In the interest of sustaining a metaphor – insipid, green greed is growing, packaged as an opportunity to innovate and disrupt. Facebook groups are filled with wanna-be founders who, like digital gangsters, hold the blogosphere ransom with hollow buzzwords and self-congratulatory promotion in their desperate search to scale and get traction.

There’s a sudden influx of overnight millionaires promising to add zeros to your bottom line by following them like a moronic messiah. They are germinating in a contagious sprouting of insincere intentions. If you’re a passionless, lazy wantrepreneur who gets turned on by the stink of money then don’t read on; there are no one-liners you can hashtag.

Incubators are serving as wellness retreats for wantrepreneurs. They’ve become temples where over-ambitious, under-experienced founders salivate over success and celebrate debt like it’s their saviour.

Even though raising $25 million of other people’s money sounds like something to celebrate, in most cases it’s not. Debt is not a celebrity, you don’t want a selfie with it. Change the word ‘raise’ to ‘dig’ and you’ve got a more statistically accurate picture of the reality.

Before this begins to resemble a wrathful scorn of a jilted-lover, let’s set the record straight.

It seems like, to be a founder in 2017, you not only need a unicorn-worthy idea, but a personal brand that heralds you as something of an entrepreneurial demigod. Obsession with our own digital reflection has peaked in a mindless amassing of ‘followers’ and ‘likes’ to prove our concept, but to who?

‘Likes’ are not the foundation of innovation, they’re the one-click stands of validation.

Having walked the gamut of entrepreneurship, I know what goes into building, scaling, and exiting a startup. I also know that when I read stories about founders raising yet another round at yet another absurd valuation, I can’t be the only one calling ‘bullshit.’

We all know the difference between revenue and profit but when on record, countless founders conveniently ignore the crater-sized dig-debt-hole that lurks in the shadows of their perfectly curated Instagram feeds.

Turning over $10 million in your first year of business is impressive – but, if you burnt through $25 million to get there, then technically you lost more than you earned. This is not sustainable and more to the point, we need to stop celebrating it. There’s nothing heroic about shitty metrics.

To shift our collective obsession with scale and redefine the metrics of success, something needs to change. To start, filter out the bullshit. Next time you interview a founder, ask less about revenue and more about about debt. It’s not about ‘debt shaming,’ but cloaking debt in gallantry is deceptive and, quite frankly, a little bit shit.

Instead of asking a founder which superfood helps them focus or what inspirational books they’re reading, ask real questions that command real answers. Try harder to find founders that fit less moulds and tick less boxes. Look further to less shiny outliers that buck trends, have no debt and have built something profitable and sustainable.

Yes, it can take money to make money but I can’t help but wonder whether scale is a dirty word and if the celebritisation of ‘debt’ is creating opportunity where there isn’t any.

Don’t even get me started on the fail hard, fail fast rhetoric, because when it comes to founders honestly talking about the tipping point to bankruptcy, there seem to be no heroes*. There are, however, no shortage of stories about founders that have pulled themselves back from the brink to create capital-funded greatness.

Nicole founded and grew ecommerce startup 4cabling.com to a 10 million dollar business. She writes on eCommerce for STARTUP DAILY. Her aim is to simplify it into an easily digestible morsel.

You can hunt her down here