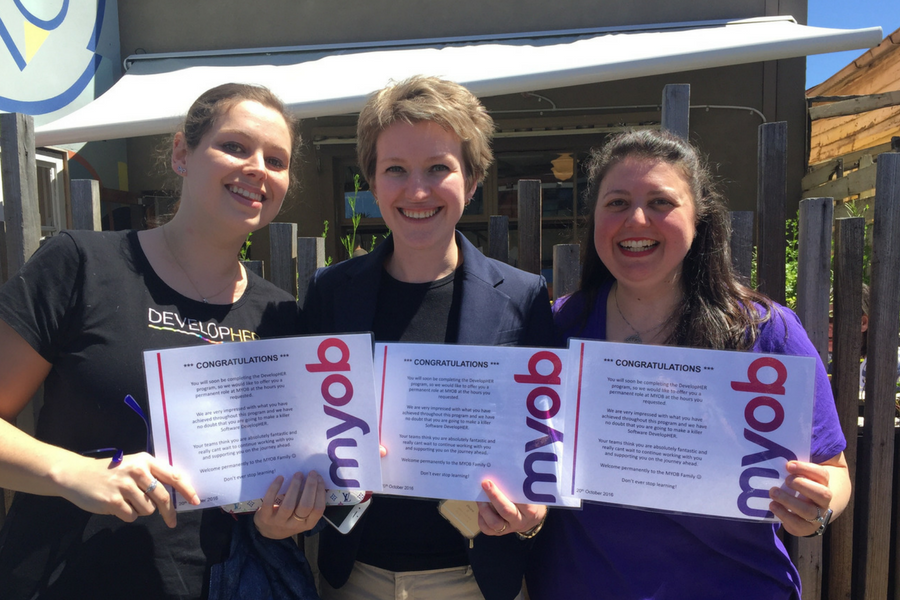 Also shifting has been the industry’s response. Companies have admitted their faults, with many seeking to improve by supporting events or programs focused on women in tech, or implementing new measures in their own organisations to help recruit and retain female talent.

After revealing early last year that just a quarter of its global workforce was made up of women, for example, Atlassian implemented new diversity measures and pledged that team diversity will be the benchmark against which it will measure its progress going forward. Earlier this month the company announced that women made up 57 percent of this year’s graduate intake.

Another Australian company leading the way is MYOB. Led by Alla Keogh, its general manager of people and performance, the company has implemented a raft of measures to help recruit and retain a diverse workforce.

Chief among these measures is DevelopHER, a paid internship looking to help three women learn to code launched last year. To encourage mothers in particular to apply, MYOB ensured that the roles came with flexible working arrangements to fit around family commitments and other obligations.

The first run of the program is now done and dusted and, by all accounts, a veritable success: the three participants, Julia Harper, Ludmila Stakhovych, and Hannah Deutscher have each been offered a permanent role at MYOB.

That was always the company’s hope; looking back at the interview and selection process they took part in last year, the trio said explained that DevelopHER was positioned as a pathway to something bigger from the start.

“I was told we ticked all the boxes and we were motivated, that we had the desire for learning and that encouragement and desire to be successful, learn, and be engaged in everything,” Stakhovych said.

Following the selection process, the first official day of the program saw MYOB throw a party to have everyone welcome the trio to the team.

“They made us feel loved right away, they appreciated us,” Stakhovych said.

Each day of the program was focused on helping the women, all three essentially new to coding, learn as much as they could; Harper said her technical learning through DevelopHer was “an almost vertical curve”.

“What looked unreal half a year ago now looks very real. I need to say that the support we’ve gotten from our teachers, buddies, and mentors has been unbelievable and without that we would not have made it,” Stakhovych added.

“Every one of us struggled at some point of time with either motivation or technical skills, but with the right support we could overcome all difficulties and become successful.”

Beyond the one-on-one support from buddies and team leaders, the fact that the program was paid was also crucial in enabling each of the three women to take part in the first place.

“[The fact it’s paid] it puts it in a different category for you; it makes it a viable option. Two of us are mums, so costs like travel becomes something of an issue, so anything that you do has an opportunity cost somewhere else with your family life and so on,” Harper explained.

“I know for me, if I had gotten the internship and it wasn’t paid, I would have made it work, but it did make it a very realistic option knowing it was covering those costs to make it sustainable. If not, it could end up being an issue for people with additional responsibilities.”

Stakhovych, also a mother, said the pay allowed her to hire a babysitter for her children, while the fact it was part-time also allowed her to spend two days at home.

“I felt lucky, and I still do, that I was able to participate and that MYOB gave me that opportunity. Without this program I wouldn’t be here and I wouldn’t have achieved what I’ve achieved,” she said.

Deutscher, meanwhile, has moved to MYOB from a full-time career in retail. She had been considering her options before finding DevelopHER, with going back to uni – where she would have had to both stop working, and outlay money on tuition – a real possibility.

Through DevelopHER she was able to both learn and support herself.

Beyond helping the women with the simple cost of living, Harper believes the fact the program was paid also gave her and her fellow participants a sense of self-worth.

“It tells women from the very beginning that what they’re bringing to the table is something worth paying for; even if we’re coming in at entry level in tech, we’ve still got life experience, previous career experience,” she said.

Harper agreed, “We’re still bringing that value into the organisation, and that’s the importance of this program. The purpose is to try and address the gender equality issues and bring in more value as the norm, so it’s walking the walk not just saying ‘we value women’. MYOB is showing that and putting it in the budget and taking that risk by putting their dollars behind it.”

“Seeing it be successful for this year solidifies what we’ve experienced and that we know we’ve been successful,” Harper said.

She added, “You always feel that sense of responsibility in a good way that we’re pioneering a way forward for other women. All three of us, we spoke about this at the beginning, we were going to give it everything we had because we realised what a privilege it was to get one of the first three spots.

“There were so many other women who are really dedicated and keen and wanted that opportunity – so we wanted to make sure we could demonstrate we could make it work so they would have access to it. We wanted to pave that pathway, so we’re proud we’ve been able to build the pathway and they’ll get a chance. We’ve found that since we walked in here there’s a whole new world of opportunities, positions available, career pathways we had no idea existed before.”

The three are encouraging women to take the leap and apply for the 2017 program – but get in quick when applications open.

Harper said, “I’ve already got a list of about 20 people asking me when the next one is starting.”